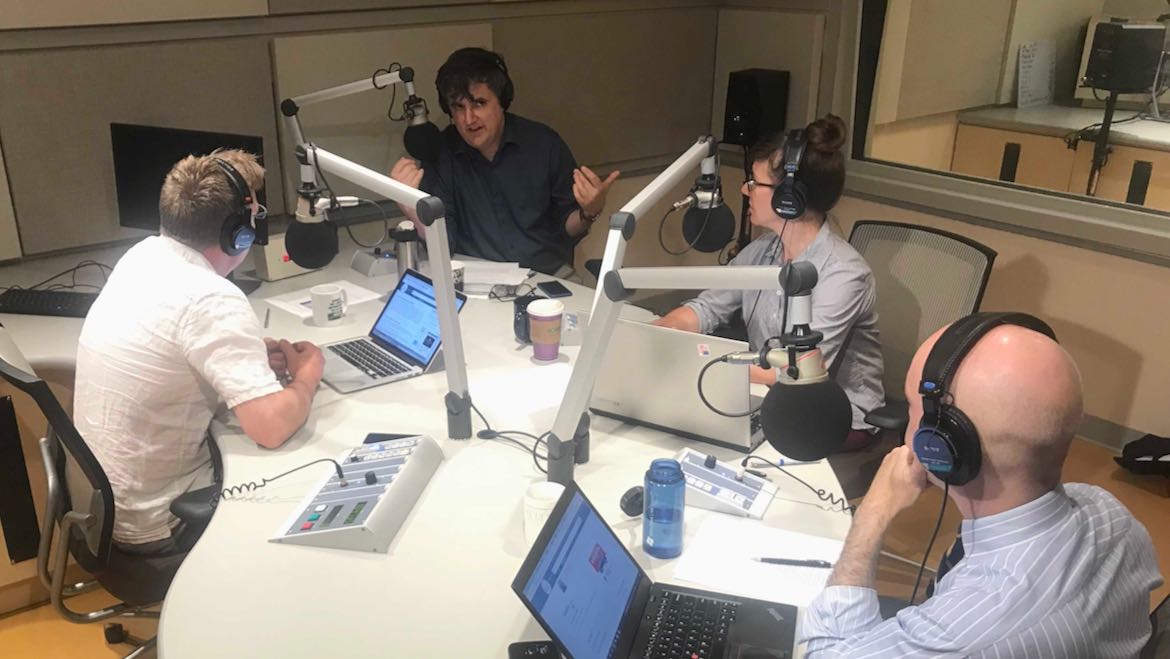 Word-loving podcast listeners have a chance to be a fly on the wall at a meeting of dictionary editors thanks to a new show from Merriam-Webster and New England Public Media.

At their biweekly pitch meetings, editors at the dictionary publishing company bounce ideas off each other about topics they might address on their website, such as word histories and new words they’re watching.

“Those conversations can be really fun because we’re just talking about ideas,” said Emily Brewster, a senior editor at Merriam-Webster and host of the podcast Word Matters. “We’ve been having those meetings for a number of years now, but it just occurred to me that those conversations might be fun to share with the public.”

That was the birth of Word Matters, which pulls back the curtain on conversations lexicographers have about dictionaries and the words within them. Topics covered since the show’s Aug. 12 launch include contested words like “irregardless,” whether Shakespeare really coined thousands of words, and how words’ meaning change over time. New episodes are released Wednesdays, ranging from 10 to 30 minutes in length.

Based in Springfield, Mass., the dictionary publisher initially tried to produce Word Matters on its own. “One of the things about podcasts these days is that anybody is supposed to be able to do one from their living room or their closet,” Brewster said. “So we thought that we would try it and … it went OK. The process was not entirely smooth. If I remember correctly, we initially had a microphone balancing on a stack of Merriam-Webster hats — very informal process.”

Editors then discussed the possibility of pairing with NEPM, also based in Springfield. Three factors made the partnership a good fit, according to Lisa Schneider, Merriam-Webster’s chief digital officer and publisher. The station and Merriam-Webster share a history of working together, a home base and, most importantly to Schneider, aligning missions.

“Our goal is to help people understand and use language better,” Schneider said. “I think the NEPM role in the community meshes really well with that.”

John Voci, NEPM’s senior director of radio, said that he was excited to continue the station’s work with Merriam-Webster. Peter Sokolowski, an editor at Merriam-Webster, sometimes guest-hosts NEPM’s podcast Jazz Beat, and Brewster had appeared on NPR and NEPM shows.

Sokolowski approached Voci last year and explained the idea they were working on for the podcast. Voci told Current that he admires Merriam-Webster’s strong digital presence and following and that NEPM is also interested in new kinds of digital ventures.

“Putting us into a digital project that has the potential to reach a global audience is certainly exciting,” Voci said. “To partner with such a renowned institution like Merriam-Webster is great for us.”

After forming the partnership, production of Word Matters moved into NEPM’s studios. But the setup shifted once again after the pandemic struck. Producers attempted to record the shows remotely but ran into problems with internet connections, which Voci said can sometimes falter in Western Massachusetts.

“We’ve sort of got to the point now where we were able to try some things to be able to bring people back into the station, comfortably distance people enough that they felt comfortable so that we could then continue to record,” Voci said.

Merriam-Webster’s content and social media manager and co-producer of Word Matters, Adam Maid, said that he appreciates NEPM’s assistance with the podcast.

“John is an expert in this stuff,” Maid said. “He is really good at not only the recording process and actual audio editing, but he has that instinct that’s been honed from working in radio and audio for so many years. His ideas that he brings to the table in terms of how to put the show together and how to make it really professional-sounding is invaluable.”

NEPM has produced a number of other podcasts, according to Voci, but Word Matters is by far its most successful effort. Voci said he’s grateful for the opportunity to work with Merriam-Webster.

“It’s been, I think, a rewarding project for both us and for Merriam-Webster,” Voci said. “We’re just happy to be part of it and excited about the response that we’ve been getting.”