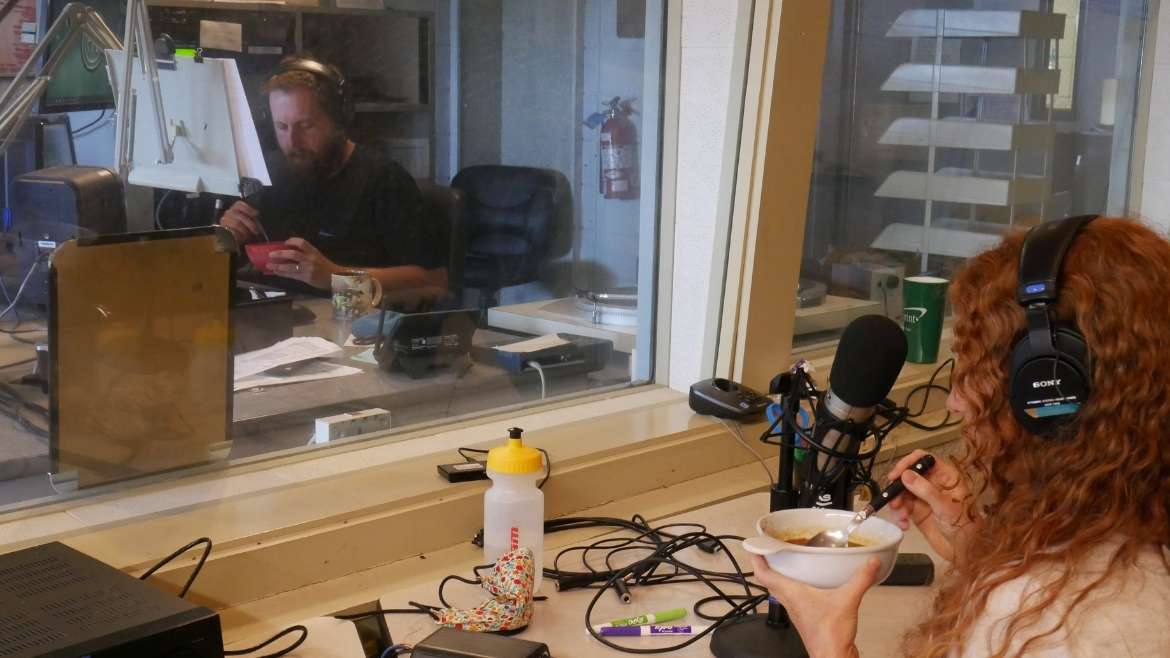 Carter and Lavery taste a traditional Kentucky stew for the third episode of "Middle of Everywhere."

A Kentucky public radio station is breaking into podcasting with a show that subverts stereotypes of people who live in small, rural towns.

Since its launch in October, WKMS’ Middle of Everywhere has introduced listeners to an atheist who fought the state of Kentucky for the right to have a license plate that says “IM GOD.” A future episode will feature a Kentucky farmer who fights a local insurance company to end policies that discriminate based on religion and sexuality.

“What constitutes Middle America, rural America, small-town America?” said Middle of Everywhere co-host Ariel Lavery, who recently settled in Kentucky. “That’s really kind of what we’re interested in, especially if people have stories that are … disrupting the stereotypes that come along with different parts of rural America.”

Middle of Everywhere received just under 10,000 downloads after the release of its first two episodes. WKMS Station Manager Chad Lampe said in an email that the feat was “simply amazing” for the small station in Murray, Ky.

WKMS had wanted to break into podcasting for a while but lacked the capacity to do so. It was able to overcome that hurdle thanks to $70,000 in grant money and support from Project Catapult, the PRX podcast training program. Based on principles of design thinking, Project Catapult encourages creators to make podcasts with specific audiences in mind.

In making Middle of Everywhere, the creators imagined their target listener as someone who has moved from a small town to a larger metro area.

“We kind of latched onto this idea of wanting to create a podcast that was based around representing stories from the middle of America and from some rural and small towns,” Carter said. “We felt like there was an interest among people who had grown up in small towns, or who had left small towns, to be connected to that kind of life still in some way.”

WKMS released the first episode of Middle of Everywhere Oct.19. The first season of 13 episodes will include a promoted episode of Black in Appalachia, a Tennessee PBS podcast whose producers were also in WKMS’ Project Catapult funding round.

But Carter said he and Lavery did not want the podcast to be “geographically bound.”

“It’s not just about the geography,” Carter said. “I think the idea that we have a middle America or a small-town America is more of an ideal of these places than it is a specific geography.”

Carter said that the hosts want to create “a sense of place” for those living in rural areas. That begins with the podcast’s title, a spin on the phrase “middle of nowhere.”

“You’re in the middle of everywhere because you’re interacting with all of these other places to fulfill all your needs as opposed to just being stuck out in, you know, the middle of nowhere,” Carter said.

Though the podcast targets people with connections to rural America, Lampe said that it also includes deeper messages about “human unity” and “commonality among people who often might think they’re very, very different from each other” that anyone can relate to.

“I’m sure that no matter who you are, you’re going to identify with the characters or the emotion that these characters portray in these episodes,” Lampe said. “It just so happens that they come from places that you don’t often hear about.”