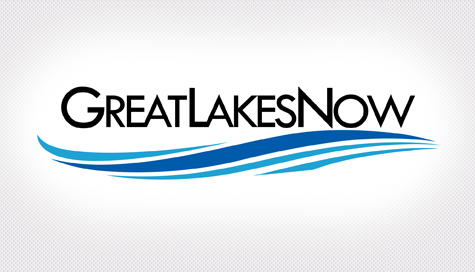 The Great Lakes, formed by melting glaciers 10,000 years ago, were ready last week for their close-up. Detroit Public Television, seizing an opportunity that comes about as often as a planetary alignment, televised 25 hours of speeches, conferences, workshops and meetings about the future of the massive lakes that nearly surround Michigan.

Great Lakes Now, a three-day event organized by a regional group and two government agencies, was documented by DPTV’s live streaming and on-demand video of speakers, nightly half-hour wrap-up broadcasts and satellite feeds that extended the speakers’ reach south to Houston, east to New York and west to Phoenix.

DPTV clearly demonstrated how a midsized public television operation could give people unprecedented access to those who make policy on local and regional issues. “Look at the role we can play in our community and communities throughout the country,” said Rich Homberg, DPTV president.

Going against conventional practice, DPTV took as little credit for the production as possible. By not branding the programs as the property of DPTV and letting other outlets – including TV, radio and websites – take what they wanted, information from Great Lakes Now was disseminated more widely.

As a result, civic leaders and other viewers were better informed about key issues confronting the chain of lakes that provides drinking water for about 10 percent of Americans.

The three days of broadcasts, Oct. 12–14, required organizational skill, technical expertise and extraordinary outreach. Still, they likely would not have happened but for two circumstances:

Most of the environmental and development issues have been around for a while, but there were new wrinkles for several, with recent data indicating things were getting worse after years of improvement, said Georgeann Herbert, DPTV senior v.p. for content and community engagement.

“And you can’t ignore the current trend of being ‘sustainable’ or ‘green,’” she added. “There is no bigger issue of sustainability in the upper Midwest than the Great Lakes.”

The joint event came together with careful coordination between meetings of the U.S. Environmental Protection Agency, the International Joint Commission and Healing Our Waters-Great Lakes Coalition. The joint commission, made up of Americans and Canadians, meets every two years to discuss boundary issues and efforts to clean up the Great Lakes. Healing Our Waters is an umbrella organization for about 120 groups concerned with the quality of the lakes.

“Anybody whose primary job is dealing with Great Lakes issues was going to be in Detroit,” said Herbert, who began work on the Great Lakes event in June, just after DPTV covered the high-powered annual Mackinac Policy Conference.

That annual meeting of about 1,500 of Michigan’s movers and shakers was far less accessible to the interested citizen. The regional chamber of commerce holds it on scenic Mackinac Island, four hours by road from Detroit, with expensive hotel rooms and scarce vacancies.

Perhaps sensitive to suspicions that Mackinac is the scene of secret deal-making or, even worse, excessive socializing, the chamber approached DPTV about covering the conference.

“The reality is it’s one of the most significant things that takes place in Michigan every year, focusing on issues, talking about what’s important on the state’s agenda,” Herbert said.

The year before, DPTV acquired an HD-equipped production truck as part of its capital improvement campaign. Jeff Forster, senior v.p. for production and station enterprises, said the station uses the $1.5 million truck about half the time for public TV productions – such as President Obama’s commencement speech at the University of Michigan, town hall meetings and a pledge special that DPTV shot at Nashville’s historic Ryman Auditorium. The other half of the time DPTV rents the truck, with crew, to production clients, generating revenue.

The truck was deployed to Mackinac Island, where it became the carefully camouflaged production source for programs picked up by every major media outlet in Detroit and public TV stations throughout Michigan. By the time the conference ended, thousands of people watched on a DPTV digital multicast channel and 42,000 others saw videos on computers. Bits of coverage were picked up by CNBC, Bloomberg and American Public Media’s Marketplace.

Great Lakes Now was the next logical step. “We saw this as an opportunity to take the Mackinac model and see if there’s going to be interest beyond Michigan’s borders,” Herbert said. “And it turned out there was phenomenal interest.”

Homberg said covering Great Lakes Now would cost about $100,000, much of it for satellite time. The lion’s share was contributed by the Fred A. and Barbara M. Erb Family Foundation. Other donors were the EPA and the International Joint Commission. DPTV held down the costs by hiring some of the crew on a project basis.

The station’s efforts caught the eye of Mekeisha Madden Toby, TV critic for the Detroit News. “Detroit Public Television knows how to both meet the needs of the community and drum up support and media attention,” she said. “Covering Great Lakes Now and giving that coverage to 13 other PBS stations made DPTV a broadcast leader.”

The Mackinac broadcasts also confirmed what DPTV executives suspected — that other broadcasters would be more inclined to use the material if they could pass it off as their own work, or at least didn’t have to contend with whirling logos from another station. Going low-profile was fine with DPTV. Working under a philosophy it calls COPE — create once, publish everywhere — the station was more concerned with disseminating the conference than getting credit for producing it.

“We made it freely available to anyone who wanted it — we took our name off of it,” said Herbert, who retired from CBS Radio in March after a 38-year career that included programming WWJ, the all-news station in Detroit where Homberg was g.m.

Instead, the Great Lakes Now coverage was branded “MiVote,” the name of a voter engagement project DPTV began a few years ago. “MiVote had already distributed the only televised debate in last fall’s gubernatorial campaign, so there was pretty ready acceptance across Michigan,” Herbert said. “It allowed the television stations to act as if it was their own debate, which we found key.”

Still, covering such issues as fecal loading or phosphorous factors in the lakes practically guaranteed that devoting resources to long-form coverage would not appeal to commercial TV stations more attuned to police sirens and celebrity gossip. “We had some problems convincing the local television stations that this is a big deal,” Herbert said. So she stressed the importance of stories about recreation and water sports, public safety and the environment.