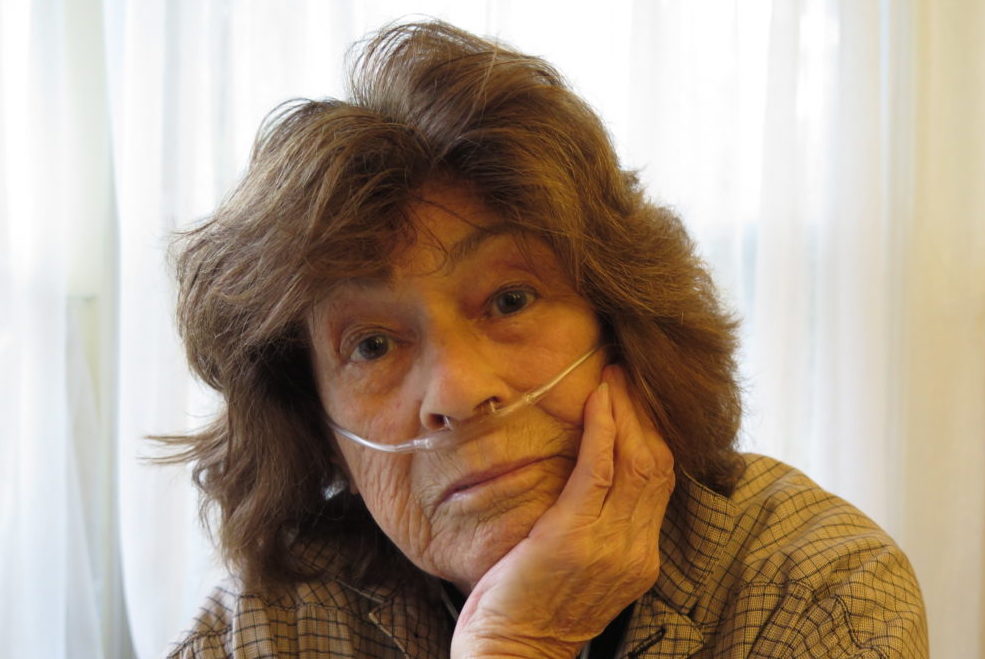 More than $125,000 was pledged to her GoFundMe campaign in less than 24 hours, a feat that many public radio stations would envy.

“I’m really overwhelmed by the whole thing,” Brock told Current from her cottage in Provincetown, Mass. “A lot of this money came from people who don’t even know me. But they know about me. Not the Alice from the movie but the real Alice. It’s very heart-warming. I don’t think I’ve taken it all in.”

A friend of Brock’s who lives in Florida, Dini Lamot, launched the campaign in late September after Brock told him during a phone call that she would run out  of money to live on in about two months.

Andrea Shea, arts reporter for WBUR in Boston, travelled to Cape Cod to interview Brock for the NPR piece. “This is the kind of story everybody needed right now,” Shea said.“I can’t say that I ever worked on a story that had such an immediate impact on a single person’s life. I feel lucky that I was able to be a part of helping Alice.”

The story of how NPR was alerted to the 1960s icon’s plight is almost as circuitous as the tale immortalized in Arlo Guthrie’s 18-minute song, which was released on his 1967 debut album. The song also provided the foundation for a feature film that was released two years later. Public radio played a pivotal role in ensuring the song’s enduring cultural legacy.

Ruth Barker of Sarasota, Fla., was responsible for connecting the people who made this happy story happen for Alice Brock. She is the 89-year-old mother of London-based radio journalist Vicki Barker, who has freelanced for CBS and NPR from the United Kingdom for nearly 30 years. Ruth Barker, described by her daughter as “a party animal,” is also pals with Lamot and his partner Windle Davis, Sarasota residents who have hosted Vicki and her mother for Thanksgiving dinners.

Lamot’s friendship with Brock goes back much further. In the early 1990s, he and Davis lived in Provincetown. Lamot worked in landscaping and was sent to a job in Brock’s garden. He didn’t know who the client was, but once they met the pair quickly became friends. Soon Lamot and Davis joined The Clean Plate Club, a small group of Brock’s friends who dined out together and wrote a review of each restaurant that they gave its owner.

Davis recalled how Brock supported Provincetown’s gay community during the AIDS crisis. “There were millions of AIDS benefits going on in the 90’s [in Provincetown], and she was at every one of them,” Davis said of Brock.

After Lamot learned about Brock’s financial situation and created the GoFundMe page, Vicki Baker alerted two NPR editors, Kevin Beesley, the senior editor for Europe on the foreign desk, and Tom Cole, a senior editor on the arts and culture desk.

“It just felt like it could be a good NPR story,” said Barker, who wasn’t able to travel to Florida this month for Thanksgiving, marking the first time she’s missed spending the holiday with her mother since 1989.

Barker monitored the progress of the GoFundMe campaign from her home in London. By Nov. 25, the day before Thanksgiving, it had raised less than $30,000. On Thanksgiving, Barker called her mother when the fundraiser reached $90,000.

“You won’t believe this,” she told her mother.

At one point Thursday, the total was rising at a rate of $1,000 a minute, Lamont said. More than 2,000 people contributed money during the day.

“I cried listening to the NPR story,”  Lamot said. “It was just perfect. Everything just fell into place.”

One donor pledged $50, the same amount, he noted, as Arlo Guthrie’ fine for littering in the true-life tale of “Alice’s Restaurant.” A Michigan donor who marched as a clown in Detroit’s Thanksgiving Day parade recalled listening to the song on his drive home after the parade. One of Brock’s former employees donated and thanked her for helping him get out of his shell. Another donor thanked Brock for “all the talks we had in the kitchen of boarding school in Stockbridge,” the same boarding school where a teenager named Arlo first connected with Brock.

As of Monday the GoFundMe campaign had raised more than $170,000, exceeding the $120,000 goal. Brock suffers from chronic obstructive pulmonary disease and doesn’t expect to survive for more than two years. She said that she needs $60,000 a year for living expenses.

Being the recipient of a benefit “is not Alice’s style at all. Alice is usually the giver,” said Viki Merrick, an independent radio producer and caretaker of Brock. Merrick co-produces the Moth Radio Hour and has been recording Brock for years. Their friendship dates back to 1979, when Merrick worked as a bartender at Alice’s at Avaloch, Brock’s last restaurant.

“Alice calls me her archivist. I’ve helped her with her papers and computers. I bring her good soup,” said Merrick.

“She’s really my rock,” Brock said of Merrick. “I don’t know what I would’ve done without her.”

Merrick wrote some of the copy on the GoFundMe page, which describes Alice Brock as “a generous and supportive friend, especially kind to the lost, the weird and the wild.”

“When people think of Alice Brock or they hear her name or they see her, they go, ‘You’re Alice Brock? You’re the real Alice?’” said Merrick. “I’ve seen it happen a hundred times.”

Merrick also recorded Brock introducing “Alice’s Restaurant” for community radio stations that play the song on Thanksgiving. In the 49-second intro, Brock tells radio listeners, “We have each other and that’s all we have” before saying “Take it away, Arlo.” The intro was posted on the website of the National Federation of Community Broadcasters prior to the holiday. Brock recorded about 20 custom tags for specific stations to use as a back announcement, which mentioned Brock’s website where visitors would find a link to the GoFundMe page.

‘I hope you’re recording it’

“Alice’s Restaurant” has a long history on public radio, especially through two of Pacifica’s stations. The song made its radio debut in 1966 on the New York City outlet, WBAI-FM, before the vinyl recording came out. Guthrie performed it live on Bob Fass’ Radio Unnameable with a trio of major folk talent backing him up: David Bromberg, Jerry Jeff Walker and Ramblin’ Jack Elliott.

“It was wonderful,” Fass recalled. “People were calling and saying, ‘I hope you’re recording it and you can play it again.’ We did record it. and we did play it over and over and over again.”

In true Radio Unnameable fashion, Fass got the performers to play along to the aircheck as it was being rebroadcast that night, creating what Fass described as “a rather thick musical soup.”

In a 1987 interview with NPR, Guthrie recalled the radio debut. When he was invited to appear on Fass’ program, “Alice’s Restaurant” had yet to be recorded, and it was unlikely to get radio airplay. “What radio is going to let you sing a half-hour song on the air?” Guthrie said. “That [Fass] would allow a maniac such as myself to walk into his studio and totally unprepared, lay down “Alice’s Restaurant” … where it really got started was right there on that radio.”

The Radio Unnameable archive at Columbia University has another version of Guthrie performing “Alice’s Restaurant” live on Fass’ show, accompanying himself on piano instead of guitar.

In 1970, two months after Pacifica’s Houston outlet, KPFT-FM, began broadcasting, the Ku Klux Klan blew up the transmitter, knocking the station off the air for three weeks, according to KPFT’s website. The transmitter was bombed again that fall as “Alice’s Restaurant” was playing. The damage from the second bombing was more extensive, and KPFT went silent for more than three months. When the station resumed broadcasting in early 1971, Guthrie performed the song live in KPFT’s studios.