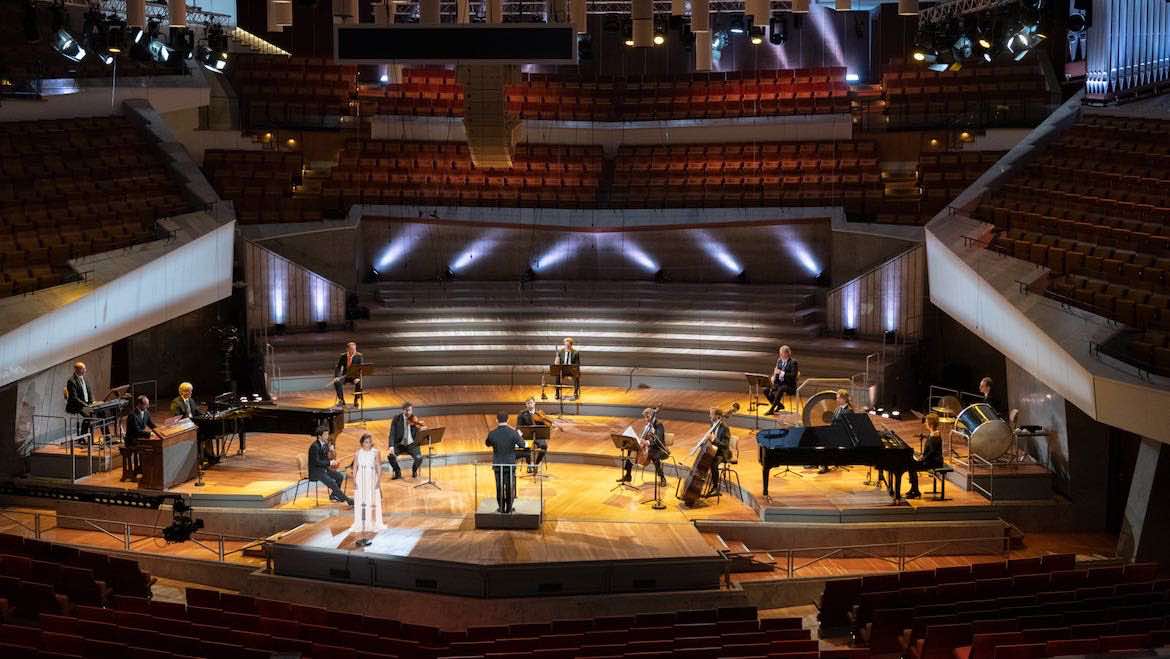 The Berlin Philharmonic performs its annual European Concert May 1 in the empty Philharmonie Berlin.

How about inviting your listeners to “attend” exhilarating symphony concerts on their big home screens? It can’t replace driving the land with the color of your local hosts, of course. So imagine how many folks might get hooked on classical anew.

Fanfare for the Berlin Philharmonic: Now one of the greatest orchestras offers the most generous archive access to concerts and films, online and on streaming platforms. As their recent maestro, Sir Simon Rattle, says, “Symphony concerts are a place where the most extraordinary emotional music is made and everyone should have that.”

A conductor once described his orchestra to me as a hundred brain surgeons in unison. Always on a short list of world’s greatest, the storied Berlin Philharmonic Orchestra gives us a colossal 618 concerts.

Here legendary Herbert von Karajan performs, through his sunnier successors: Italian Claudio Abbado, Brit Sir Simon Rattle, and since 2019, Russian Kirill Petrenko. Plus, all those dashing virtuosos and guest conductors; 15 of the latter just in Beethoven.

Among dozens of films, The Reichsorchester was released on the Philharmonic’s 125th anniversary. Eerie Nazi footage is woven into interviews with elderly former players still torn by their association. At birthday concerts for Hitler, the minister of propaganda, Joseph Goebbels, barks his preamble of vitriolic nationalism. Hitler never attended.

Few Philharmonic players (likely under 10) were Nazi Party members, and even fewer Jews were purged from the orchestra, according to the film. Wilhelm Furtwangler, their towering adored conductor, walked a tightrope to protect his half-Jewish players. Despite bombed-out concert halls, the Philharmonic kept playing until days before Russian tanks rolled through Berlin.

On a brighter note, what’s here for homebound teenagers? Try the finales of Beethoven’s Seventh (from their electric 2008 Moscow concert, please) and Tchaikovsky’s Fourth or his violin concerto, for dazzle. If your teens like watching other teens (ha!), see Rhythm Is It!, opening with bass-throbbing rap. Average German kids train for a special BPO performance lead by Sir Simon, who notes, “You can change your life in a dance class.” And so it does.

Another film, Trip to Asia: The Quest for Harmony, features their 128 musicians traveling with triumphant themes — A Hero’s Life by Richard Strauss and the Eroica Symphony by Beethoven. After their Taiwan concert, Sir Simon beholds a huge plaza of cheering youthful fans. They feel like rock stars.

For older players, this Asian tour means a nostalgic swan song. One new member had beaten out 120 others auditioning and wonders if she deserves it. Another rebels over excessive travel, strange foods and on-demand frequent performing “like the press of a button.” Not his cup of tea.

Maestro Rattle observes the rarity in society of a hundred people with big egos who leave them at the door for grand collaborations night after night. They respond well to his wild-haired gusto, perfectionism and humanity: “Part of the human condition is, not only what you are yourself but empathy and imagining what other people are, and that’s what artists are there to elucidate.”

Browsing their archive (by six categories!) yields my wish list for BPO premieres: Barber’s Violin Concerto, Hanson’s Romantic Symphony and Prokofiev’s First Piano Concerto. As Russian composer Sergei Rachmaninoff once said, “Music is enough for a lifetime but a lifetime is not enough for music.” Likewise, this sprawling archive of instant concerts is glorious yet overwhelming.

The earth spins in chaos while a great orchestra reassures us with continuity and international harmony. Among many examples: An Indian guest conductor (Zubin Mehta) leads a Korean-American violinist (Sarah Chang) in an Italian concerto (by Niccolo Paganini) alongside the Berlin Philharmonic, itself composed of many nationalities.