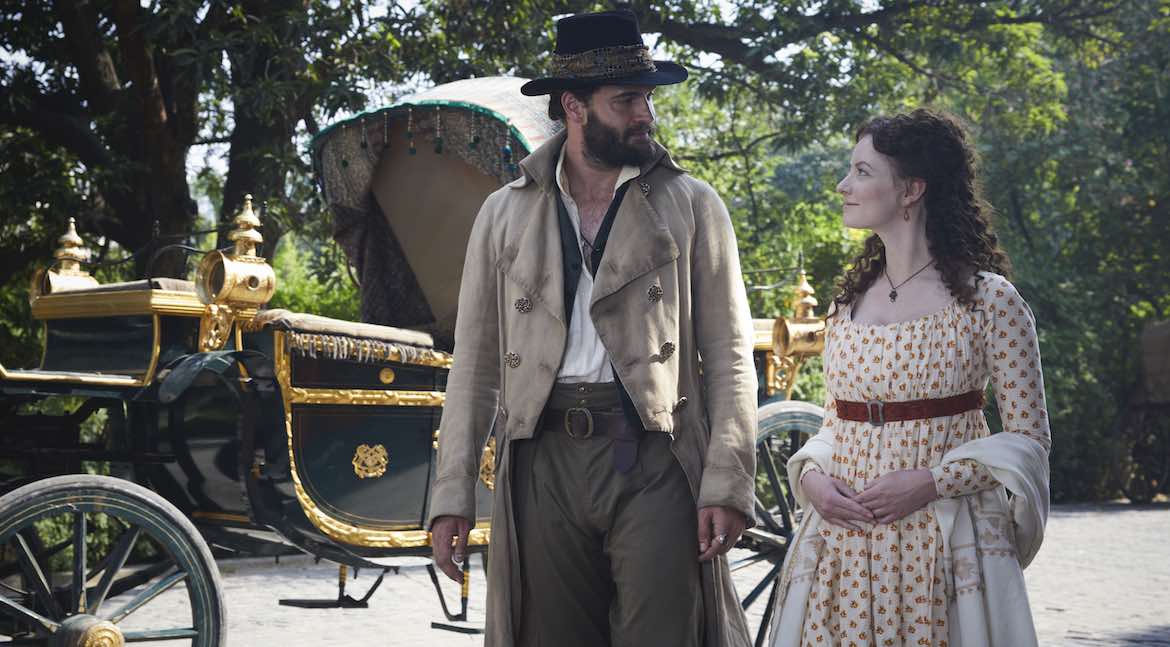 Beecham House, a lavish costume drama set in India, will lead a new Masterpiece strategy to convert drama fans into members through PBS Passport, the streaming service for station donors.

All six episodes of Beecham House will release for binge viewing March 1 on Passport and Amazon Prime’s PBS Masterpiece Channel. The digital release coincides with launch of public TV’s March pledge drive. It’s also months ahead of the series’ broadcast premiere, which is planned for early summer.

“This is really a Masterpiece initiative to help stations with the membership drive on Passport,” said Susanne Simpson, EP. “We think it will get a great audience, and we timed it to coincide with the first Sunday of pledge.”

Beecham House stars Tom Bateman (Vanity Fair, Jekyll and Hyde, Murder on the Orient Express) as the wealthy and mysterious John Beecham, a former soldier who purchases the opulent property to start a new life with his family. Also starring Lesley Nicol (Downton Abbey) and Leo Suter (Victoria, Sanditon), it is the first period drama and TV series created and directed by British filmmaker Gurinder Chadha (Blinded by the Light, Bend It Like Beckham).

British dramas are the most popular programs on PBS Passport, and have been since the service launched in late 2015. Simpson said Masterpiece titles make up half of all viewing on Passport. “That says to us that Masterpiece is a reason that viewers become members of their stations,” she said.

Simpson and her staff often discuss ways to help stations promote Masterpiece and its programs. In planning this strategy, the staff looked for a Masterpiece show that would be a good candidate for early exposure on Passport.

Beecham House has everything that Masterpiece viewers love, Simpson said. It’s an epic family drama with beautiful costumes, elaborate sets, romance, passion and love. “It hits all the right notes,” she said. “We think it’s a membership magnet, as a matter of fact.”

The series is especially well-suited for Passport, she said, because of its appeal to younger viewers. “Therefore, going out on a digital platform may be an advantage in bringing in some of that younger audience,” Simpson said. “We’re certainly going to be promoting it on social media.”

Masterpiece will promote Beecham House on its social and digital platforms and its email newsletter, according to publicist Laura Garvey. “We will focus on promoting content that drives viewers to binge Beecham House with PBS Passport … introducing the series to viewers and making them aware of the binge opportunity,” she wrote in an email. The promotions will continue after the series releases on March 1, pointing fans to its availability for streaming.

This marks the first attempt by Masterpiece to use the popularity of its iconic dramas first and foremost on behalf of fundraising for PBS stations. But audience response to other dramas released on Passport have informed the strategy.

Downton Abbey, the Masterpiece hit that delivered its finale season in 2016 — just after Passport began rolling out at stations — forged the connection between Masterpiece and PBS pledge, Simpson said. “I think Downton Abbey was one of the most successful pledge shows that we ever had,” she said.

For stations in the initial launch group in December 2015, viewers who became Passport members could binge-watch entire seasons of the serial drama. PBS and Masterpiece created Downton Abbey pledge specials throughout the series run.

The first Masterpiece to launch on Passport prior to its broadcast premiere was The Chaperone, starring Elizabeth McGovern of Downton Abbey fame. Because The Chaperone had been released theatrically, the decision to put it on Passport was different, Simpson said. With all the publicity around the theatrical release, it made sense to make it available to Passport viewers ahead of its broadcast last year.

“It wasn’t a true initiative to drive viewers to their stations and to Passport,” Simpson said.

Two years ago, PBS acquired Jamestown for Passport and the Masterpiece Channel, and scheduled it for broadcast later. Masterpiece wasn’t involved in that purchase.

Sometimes stations purchase their own content for Passport through the BBC or distributors, said Jennifer Hinders, PBS senior director of video strategy. Jamestown “came from one of those side channels” and did very well, she said: “People enjoyed watching it.”

PBS released all episodes of Jamestown for binge viewing on Passport, while the Masterpiece Channel on Amazon Prime unspooled one new episode a week.

With Beecham House, all episodes will be released simultaneously on both channels. “We do try to have parity between both experiences,” Hinders said.

At this time, PBS is testing the best approach for releasing dramas on digital platforms, Hinders said. “The binge model is a format that we have been leveraging, as have other media organizations,” she said. PBS may consider tweaking that model to hold back some episodes so viewers aren’t binging an entire series. “We’re just sort of exploring that now,” she said.

Once Beecham House premieres, Hinders said she will keep a close eye on streaming levels and how to help viewers find the series.Her colleagues will examine the impact of marketing efforts.

PBS will be looking for feedback on whether it’s helping stations convert more viewers into members and driving more donations, Hinders said. “With Beecham House, I expect it to do as well, if not better, than some of our other programming,” she said. “We just know that this content performs well for folks who do choose to donate to their stations and get Passport. This is the type of programming they would enjoy.”

Masterpiece and PBS won’t disclose how much it cost to acquire Beecham House for Masterpiece and Passport. In almost all rights negotiations, Simpson said, broadcast rights are the most expensive part of the package. But digital rights have become increasingly important for PBS.

“The digital audience is very important to us,” Simpson said. “We do want to have those rights so we can make sure everyone sees the program.”

From Simpson’s perspective, Beecham House’s debut in the digital world is an experiment. “If it works for everybody, that’s great,” she said. “We may contemplate doing it again in the future, but right now we’re just focusing on this one program.” There are no plans for a similar initiative in the coming year or beyond. “We haven’t even talked about any additional titles,” she said.

At this point, she said, series on Masterpiece will continue to be selected with the on-air audience in mind first and foremost. “That’s really our commitment because our audience is still showing up at 9 o’clock on Sundays and that’s been our loyal audience for almost 50 years. Our goal is to serve that audience first,” Simpson said.