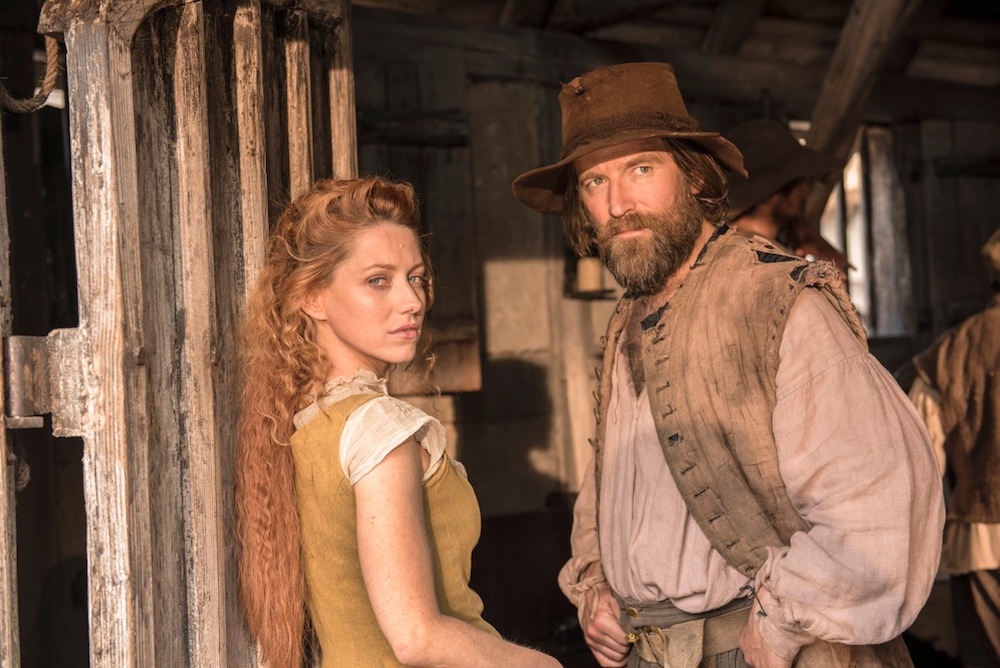 At present there are no plans to broadcast the miniseries on Masterpiece, the iconic drama series from WGBH in Boston that imported Downton Abbey for PBS audiences. Over six seasons, the serial drama became a blockbuster with both broadcast and online audiences, helping stations convert its fans into members. As its popularity grew, PBS developed a hybrid-distribution strategy that linked broadcast runs to limited streaming windows.

All eight episodes of Jamestown launch Friday on PBS Passport. The PBS Masterpiece Amazon Channel, managed by PBS Distribution, will debut the first episode that day. The remaining episodes will land on Amazon each Friday.

PBS Distribution is experimenting with digital-first distribution for the drama, which follows three young women who depart England to marry settlers in the American colony. “We will be closely watching this pilot to see how it works for stations,” said Andrea Downing, co-president.

“Our preferred approach is always to have it available for broadcast by the stations, but it is not always possible” due to rights issues and costs, Downing said. If this strategy proves successful, she said, “that could lead to more selective OTT offers” — over-the-top content distribution.

Jamestown opens in 1619, as the lead characters embark on their journey to America. Upon arrival, each young woman must marry the man who paid for her passage. “Twisting storylines follow the new arrivals as they make an immediate impact and are thrust into a new world of love, desire, power and survival,” according to the PBS announcement Tuesday.

Stations have expressed an interest “in more unique and exclusive drama opportunities,” Downing said. “If the program works well for stations, it’s possible that it comes to broadcast at a later date.”

Jamestown was selected for streaming by PBS, Downing said. Rebecca Eaton, executive producer of Masterpiece on PBS, was not involved in the production and not available to comment on the digital-first release. WGBH owns the Masterpiece brand and co-owns PBS Distribution with PBS.

Stations will receive creative assets and some marketing support for Jamestown, Downing said.

Drama offerings on Passport have provided strong incentives to lure new members, according to Jeff Regen, VP for membership, marketing and development at WETA in Washington, D.C., who conducted an analysis on how Passport affects donor behavior.

“We see this as a powerful new model for sharing compelling content that could drive success in growing membership,” Regen said.

Offering digital exclusives “could also be a great way to increase loyalty and viewing among donors — including attracting and retaining a new younger donor base and viewing audience,” he said.

Regen is also pleased that Passport members will be able to watch all eight episodes on Friday. “Binge-watching opportunities where the whole series can be seen upfront create the biggest spikes in new member acquisition, activations and streaming,” he said. British imports such as the royal costume drama Victoria, The Great British Baking Show and Poldark all produced binge-viewing spikes for WETA membership in the past, he said.

Programmers and station executives have been calling for more digital exclusives for online viewers, but a few questioned the timing of PBS Distribution’s announcement at the tail-end of the March pledge season.

“The good news is that PBS has taken the lead to stock the Passport library with original programming,” said Jim Wiener, chief programming officer at ThinkTV in Dayton, Ohio. The bad news? “Stations could have had long-lead spots touting this in February, and :15 spots within pledge breaks promoting this Passport exclusive — another reason to become a member, renew or even switch to sustainer mode in order to never miss out on a new drama,” he said.

“As a programmer, I see KQED Passport as another channel that can be curated,” said Susie Hernandez, senior program director at the San Francisco station. “I appreciate that PBS is placing new-to-Passport content to freshen up the lineups. I just wish we had more time to promote it to our members and in our guide.”

“I think that Passport is vital to moving supporters to the sustainer model,” said David Thiel, programming services director at Illinois Public Media, “so anything that makes it a more attractive service is welcome.”

At WNET in New York City, “our members are super-consumers of PBS content,” said Dan Greenberg, chief digital officer. “They’ve been very enthusiastic about the exclusive content we have offered on Thirteen Passport. I’m glad we’ll be able to offer them more great content like Jamestown.”