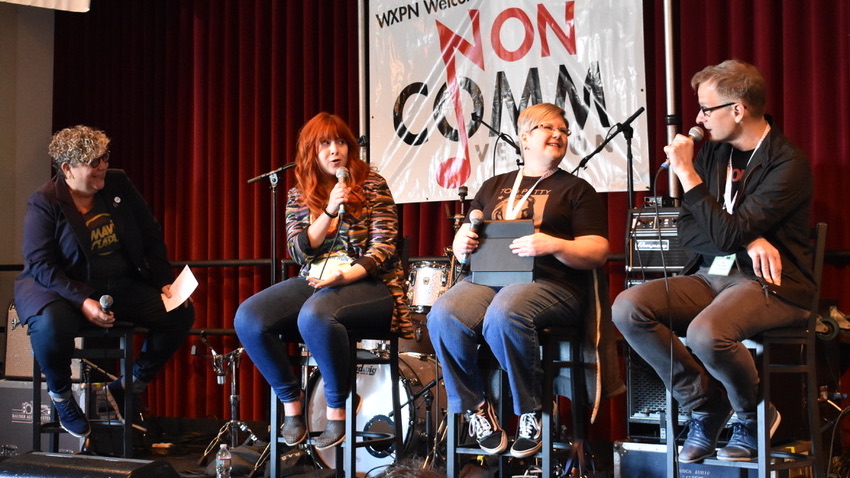 PHILADELPHIA — Public radio music programmers emerged from a panel discussion Wednesday with more questions than answers about whether musicians accused of misconduct should continue to appear on station playlists.

During the session at the annual Non-Commvention, which focuses on public radio’s Triple A–format stations, programmers explained their thinking behind the removal of some artists from their playlists. One artist they found themselves reconsidering recently was Ryan Adams, the popular rock musician who was the focus of a February New York Times story detailing accusations of abuse and harassment.

“Our world got rocked really hard” by the news, said panel moderator Rita Houston, PD at WFUV in New York City. Houston’s station dropped Adams from its rotation after the Times report.

Colorado Public Radio’s OpenAir music service also dropped Adams’ music. The decision wasn’t difficult because Adams wasn’t core to the station’s format, said Music Director and Assistant PD Jessi Whitten, who was on the Non-Commvention panel. However, it did not drop Whiskeytown, a band Adams fronted.

“Throughout the years, our policy has always been not to add predators knowingly and don’t add assholes knowingly if you don’t have to,” Whitten said.

WFPK in Louisville, Ky., didn’t make an immediate decision when the news about Adams broke, said PD and conference panelist Stacy Owen. Adams was a core artist for the station, so the decision to drop him was more difficult. But the station did “when it became clear what was happening,” Owen said.

“I’ve never really had a specific policy,” she said. “But the more I thought about it, the more I realized we really have an unspoken one. We’re at a pivotal point in history where public radio is in a unique position to take a stand on some of these issues, where maybe a commercial programmer would not be. We have the freedom to do that. How blessed are we?”

Panelist Jim McGuinn, PD at The Current in St. Paul, Minn., said he tries to put himself in the place of a typical audience member.

“If the majority of my audience is going ‘icky’ about, say, Michael Jackson, then maybe I don’t need to play Michael Jackson,” he said. “I don’t know if it stays that way forever. Like, maybe that changes? I don’t know. But for now, whenever we talk about these issues, we say, look, let’s do this for now because I don’t know if I have the absolute moral authority on anything.”

The issue isn’t confined to the Triple A format. After conductors James Levine and Charles Dutoit were accused of sexual abuse in 2017, classical station WDAV in Davidson, N.C., continued to air symphonies they had conducted but stopped naming them on air. “We don’t want to punish the musicians who made the records with these conductors,” said Rachel Stewart, associate content director.

Some panel attendees asked how stations should handle Richard Wagner, who held anti-Semitic views. Stewart acknowledged that like many stations, WDAV continues to air Wagner’s music.

“Can you separate the art from the artist?” asked Houston. Most in the audience said they didn’t know.

Lauren Onkey, senior director of NPR Music, encouraged patience “as we kind of work through it and screw it up.”

“We are in a moment now where we’re really trying to think about these things in a way that I’ve never experienced,” she said. As a teenager, Onkey said, she saw an ad for the Rolling Stones’ Black and Blue that depicted a woman bound and beaten up.

“Where was I going to go to say, ‘This just seems really not good?’” she asked. “There was no sort of forum for that.”