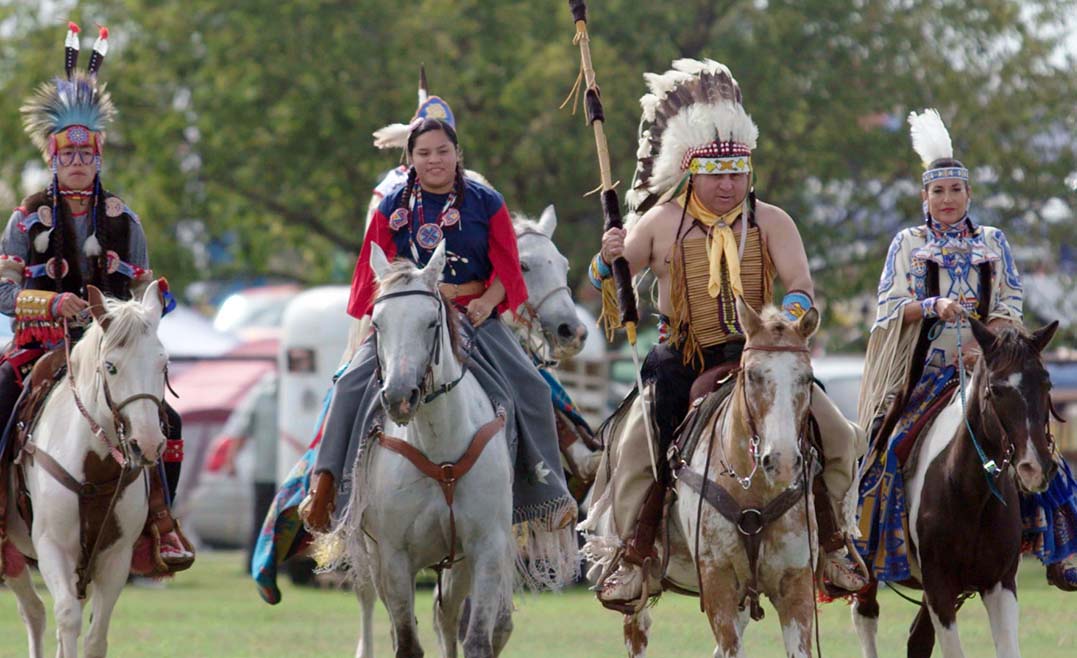 An episode of "Native America," a featured series in PBS' fall season, focuses on the Comanche tribe of Series Producer Julianna Brannum.

Native America, PBS’ first deep dive into Native culture in a decade — and its most ambitious — will air this fall amid a surge of diverse Native American content across public, commercial and digital media.

Weaving together centuries of history and science to showcase a vast interconnected civilization that took root in the Americas 13,000 years ago, the glossy big-budget series is one of the many and varied programs on Native America that will air across public television this fall and beyond.

Scheduled for weekly runs on Tuesday nights, beginning October 23, Native America is already being promoted during station breaks. PBS went to unusual lengths to greenlight the documentary five years ago, according to Bill Gardner, VP of programming and development. Gardner was drawn to the producers’ pitch for a sweeping depiction of an ancient civilization and traditions that survive today, and helped steer them to a greenlight. 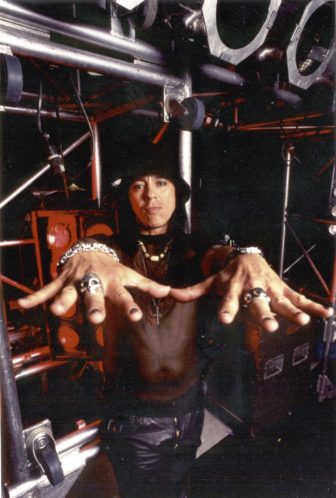 Heavy-metal drummer Randy Castillo is one of the Native American musicians profiled in Rumble, a film premiering on Independent Lens in January.

Vision Maker Media, one of the CPB-funded National Minority Consortia, is presenting two films in the next season of Independent Lens — including Rumble, a documentary on Native Americans’ contributions to rock music. In September, American Public Television will distribute a 13-part Vision Maker–backed series on Indigenous tattooing traditions.

The burgeoning pipeline extends into new genres and future seasons, including a Native American standup comedy series produced for the multicast channel FNX, and a PBS Kids show that will be the first to feature a Native American as the lead character.

Cable TV channels and mainstream Hollywood have also been rolling out productions that feature Native storylines and characters. Rise, a documentary series that Viceland debuted in January, investigated ongoing environmental rights struggles facing Native Americans and Indigenous citizens. Three well-received Hollywood films over the past year — Hostiles, Wind River and The Rider — feature Native American narratives and actors, as do TV series such as FX’s popular Fargo and the Paramount Network’s Yellowstone.

These observers credit national press coverage of the protests at the Standing Rock Sioux Reservation in North Dakota in 2016 for bringing public attention to the needs and interests of Native communities. Changes in the media business — specifically the explosion of distribution outlets and reduced costs of film production — have helped filmmakers secure funding. And efforts to support and mentor Native American creative talents have helped a new generation of directors, producers and writers move into key roles, opening new possibilities for telling the stories of their communities.

“We have Native American filmmakers on their third or fourth documentary with us,” said Shirley Sneve, ED of Vision Maker Media. “They understand how to tell their stories so they resonate with more people.” Vision Maker provides grants to most Native American programs presented on public television. Sometimes Vision Maker produces shows in-house, such as Growing Native, a four-part series coming out this fall.

Casting agent Rene Haynes, who has worked on projects from The Twilight Saga to the 2009 American Experience series We Shall Remain, noted a definite “upswing” in contemporary Native stories from mainstream Hollywood. Native actors are starring in several series now on air, “which was not the case five years ago,” she said.

‘On the radar of the world again’

Haynes and others who work with Native American talents describe the Dakota Access Pipeline protests as a key turning point. Members of the Standing Rock Sioux tribe established a camp in April 2016 to block construction of the 1,200-mile, $3.8-billion oil project. The pipeline ran through sacred burial grounds and under the Missouri River, the tribe’s main source of drinking water.

Thousands of protestors and media crews from the U.S. and around the world converged on the camp through 2016. Amy Goodman, host of Democracy Now!, was among those arrested as the conflict escalated. Though the effort was ultimately unsuccessful — President Trump signed executive orders expediting its completion shortly after taking office in 2017 — Hayes credits Standing Rock with “waking up a lot of people in the mainstream creative community.” 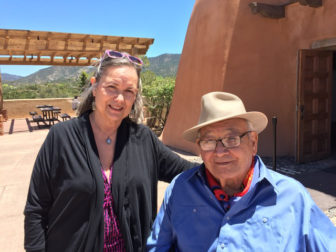 Sneve, left, with author N. Scott Momaday, who will be profiled on American Masters next year.

“Since the Dakota Access Pipeline, we are on the radar of the world again,” said Sneve, a member of the Rosebud Sioux Tribe. “And even though we lost that when the administration changed, it really raised awareness, not just of those tribal interests, but tribal interests across the country.”

Before the protests, “it had been a while since we were visible in American popular culture,” said Bird Runningwater, Cheyenne and Mescalero Apache, who directs the Sundance Institute’s Native American and Indigenous Film Program.

Social media and the blogosphere have become a great source of content, including from “a huge number of Native American journalists who are trying to tell their stories.” said Chris Hastings, EP and editorial manager of content at World Channel, the public TV multicast channel that presents works by diverse producers from around the globe. With production costs falling, “there’s an explosion of content available,” Hastings said.

“In the past it had been so frustrating to me to see a whole community’s culture in a drawer. There was nothing. No visuals,” said Yo Ann Martinez, a community engagement specialist at KQED in San Francisco, who is Cocopah and Yaqui. Now social media “is painting a broader picture.”

She points to websites such as Indian Country Today and Reclaiming Native Truth, a project launched in 2016 to dispel misperceptions about Native America, for amplifying voices from Native America. The popularity of A Tribe Called Red, a Native producer and DJ crew from Canada, is another reflection of creative expression in popular culture. “You find way more platforms to express yourself” as a Native American, she said.

In the filmmaking world, Runningwater is credited with helping to nurture the new generation of Native American talents who are bringing their work to TV and movie screens.

Since 2001 he has guided the Sundance Institute’s programs for Native American and Indigenous screenwriters, directors and producers. Runningwater oversees the Native Forum, which premieres films by Native filmmakers, and programs like the Time Warner Native Producers Fellowship, the Full Circle Fellowship, the Merata Mita Fellowship for Indigenous Artists and the Native Filmmakers Lab. Together these programs support 12 to 15 fellows each year, he said, depending on the level of funding.

Alumni include Julianna Brannum, Comanche, series producer of Native America, and Jeffrey Palmer and Jhane Myers, producers of Words from a Bear: The Enigmatic Life of N. Scott Momaday. That film, supported by Vision Maker, will air on American Masters sometime next year.

Brannum described her Sundance fellowship as “hugely helpful to me. And I am watching so many people’s careers just blossoming.” 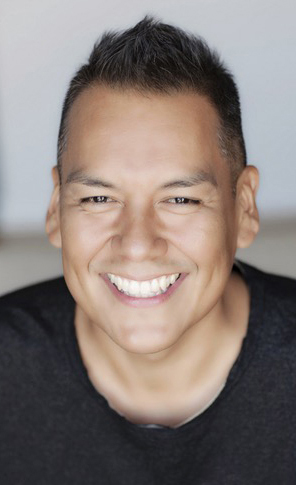 For Runningwater, real progress will be achieved only when more Native talents are behind the camera as well as in front of it. Twenty years after theatrical release of Chris Eyre’s iconic Smoke Signals, the film remains one of the only commercially successful features to be written, directed and produced by Native Americans.

Runningwater now sees more Natives working as writers and directors, and he’s hopeful that will continue.

“We are being hit up [by Hollywood] for Native writers, producers, directors. A lot of work is being conceptualized,” Runningwater said. “I feel like this is the new window.”

At Vision Maker, producer Charles “Boots” Kennedye, a member of the Kiowa Tribe, has also seen an uptick in funding applications from Native American directors and producers. Vision Maker funds about a dozen productions annually from a pool of up to $750,000 in CPB money. It requires every grantee to have a Native American on its team, he said.

Grant applicants have typically listed Native Americans as advisors, according to Sneve. That role is limited, and means others ultimately control the film’s creative direction.

But last year’s pool of Vision Maker grantees was the first to have a Native American on every team working in such key positions as producer, director, editor or videographer, according the Kennedye and Sneve.

Vision Maker also helps its grantees secure public TV broadcasts of their programs. Heightened interest in Native American programs shows up in the growing variety of distribution channels and the number of telecasts.

PBS series such as Independent Lens, POV, American Experience and Frontline give filmmakers a big shot at reaching the broadest possible audience. When offering its programs to stations for customized local scheduling, Vision Maker also works with APT, PBS Plus and the National Educational Telecommunications Association.

The digital multicast World Channel, which rebranded itself six years ago to showcase programs by independent and diverse producers, and FNX, the only U.S. channel devoted exclusively to Native and Indigenous programming, offer new opportunities to engage Native American communities.

FNX, airing on 23 affiliates including public and tribal stations, launched in 2011 through a partnership between KVCR in San Bernardino, Calif., and the San Manuel Band of Mission Indians. It carries every program funded by Vision Maker, but also features original productions such as the Native American standup comedy series First Nations Comedy Experience. Its first season of 13 episodes was taped earlier this year in front of live audiences at San Bernardino Valley College, KVCR’s licensee.

FNX Chief Content Manager Micah Wright, Muscogee Creek, said the network is planning a second season and would like to offer the series to PBS stations, if he’s able to secure underwriting.

Data shared by the consortium show a dramatic increase in carriage of Vision Maker programs since 2014.

Total PBS station telecasts of Vision Maker programs — whether presented on PBS primetime series, through distributors including APT and NETA, or on World Channel— surged 42 percent from fiscal 2014 to 2017.

The footprint of Native American programs on World made a big difference. Its telecasts of Vision Maker films jumped by 151 percent over the same three-year period, and then doubled from FY 2016 to FY 2017.

About 10 percent of the film submissions World receives annually are programs by or about Native Americans, Hastings said. The shows he acquires air across the schedule, including on the weekly series America ReFramed, Doc World and Local, USA.

John Howe, EP at KUED in Salt Lake City, said World has “kind of become the go-to place” for producers seeking national distribution for their programs. During National Native American Heritage Month, in November, the World Channel will present an update of Unspoken, Howe’s 2016 documentary about Native American boarding schools.

Native American programs are “part of the fabric” of the channel,” said Liz Cheng, GM for television for WGBH, who oversees World Channel. Seventy-two licensees covering 63 percent of U.S. television households now carry the multicast service, which is distributed by APT. Since its relaunch with a programmatic emphasis on diversity, it’s been gaining ground across the system, according to several station executives.

“I have World on in my office all the time. They’ve done a great job,” said Franz Joachim, CEO of Albuquerque-based New Mexico PBS, which broadcasts to a region with a significant Native American population. World’s programming by and for Indigenous peoples includes those from the South Pacific and Polynesia, he said. “It’s all there. I give them a lot of credit.”