NPR announced Wednesday a new clock for Morning Edition that will take effect in August, with adjustments suggested by station leaders who saw a draft version.

The clock consolidates NPR’s newscasts at the top and bottom of each hour and gives stations the option to replace a segment in each newscast with local content, according to a memo to station leaders from VP for Member Partnership Gemma Hooley and Acting VP for News Programming Sarah Gilbert.

According to station leaders who spoke with Current, NPR had proposed last month that stations would be required to air the full national newscast at the bottom of each hour. Some managers asked for the option to cover part of the newscast, and more than half of the responses to a station survey that followed webinars about the new clock focused on the time slot.

NPR also granted a request from stations to switch the placement of a music bed and an All Things Considered promo at the bottom of the hour.

“We agree that the two significant additional changes you jointly proposed will allow for maximum flexibility in programming local content and underwriting, as well as delivering on our shared aim of growing audiences by delivering more unique insight and enterprise reporting,” the memo said. 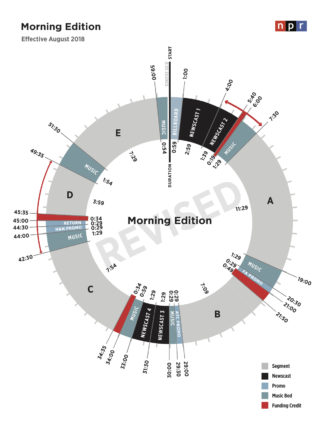 The new clock, which debuts Aug. 13, includes two newscasts per hour instead of three and longer segments after each newscast. NPR undertook the changes to respond to a sense that the show’s current clock is “choppy and disjointed, as hosts and programmers tried to fit a much more ambitious rundown into an outmoded clock,” Gilbert and Hooley wrote in the Wednesday memo. Listeners are no longer getting their first news of the day from Morning Edition, so they come to the show for a “distinctive deep dive of a satisfying segment,” they wrote.

Jonathan Ahl, GM at Tri States Public Radio in Macomb, Ill., said he is happy NPR will let stations air local news at the bottom of the hour. Ahl had joined GMs at other Illinois NPR stations in writing a letter to the network asking for the availability.

The new clock is “cleaner and less cluttered,” Ahl said, and “gives more flexibility and options for local pieces of varying lengths.” It also moves the show’s humorous 30-second “return” segment from the bottom of the hour to 44 minutes and 30 seconds into the hour, which Ahl said he welcomed. Its placement next to the station’s local newscast at the bottom of the hour “was always a struggle,” he said.

“I think the team here is pretty excited to implement” the new clock, Ahl said. “We see it as a good thing.”

After four webinars with stations last month, 84 percent of respondents told NPR “that the proposed clock goes some way to accomplishing the stated goals,” Hooley and Gilbert said in the memo.

Of more than 300 comments from stations about the proposed clock, 54 percent focused on the bottom-of-the-hour newscasts and other elements in that slot. Others dealt with editorial choices, the position and content of the “return,” plans for NPR’s Up First podcast, and the length of a funding credit window, according to the memo.