Public radio station leaders are concerned that a proposed revision to the clock for NPR’s Morning Edition may reduce opportunities during the show for stations to insert local newscasts.

In four webinars last month, NPR representatives discussed the proposed changes with station staffers. The network has proposed shifting from three national newscasts during Morning Edition to two at the top and bottom of each hour and removing one minute and 29 seconds of music beds. The proposed clock would also add one minute to the segment following the hour’s first newscast and 30 seconds to the segment following the second newscast. 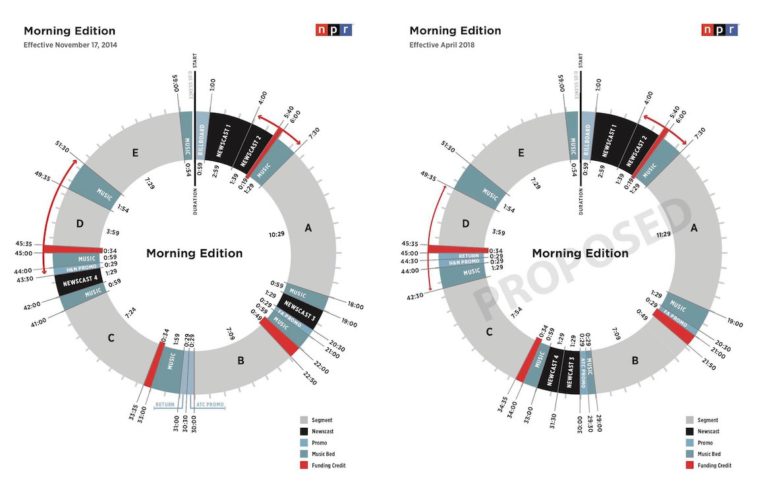 The current clock for “Morning Edition,” left, and a revised clock proposed by NPR.

The revision is intended to improve what NPR’s Sarah Gilbert, acting VP for news programming, has called a “cluttered” listening experience throughout the show. The show’s current clock has been in effect since 2014.

Stations’ concerns now focus on where they will be able to insert local news in the proposed clock. Three station leaders told Current that during the webinar, NPR’s presenters said the proposed clock would require stations to air a full three-minute network newscast at the bottom of each hour with no option for a local newscast. The presenters made clear that rules governing local content were still being worked out, according to the station staffers.

Station staffers are requesting that they be able to cover “Newscast 4,” the second half of the three-minute newscast starting at 30 minutes into each hour. Jonathan Ahl, GM at Tri-States Public Radio in Macomb, Ill., said he agrees that the new clock is “cleaner.” But he added, “My position is that [Newscast] 4 has got to be optional.”

Enough station staffers shared concerns during the webinar Ahl attended to ensure that they were heard “loud and clear” by NPR, he said.

Ahl emailed Gemma Hooley, NPR’s VP of member partnership, on behalf of GMs in the Illinois Public Broadcasting Council to argue that stations should be able to use the slot for local news.

“After carefully considering local newscasts, local feature placement, continuity, forward promotion, local underwriting and other elements that local stations are required to deliver upon to create a high level of audience service and an exceptional listener experience, we are steadfast that the clock, as proposed, MUST allow for Newscast 4 to be optional,” the letter said.

NPR spokesperson Isabel Lara did not confirm whether stations were told that the newscast would be mandatory. The network is “collecting as much feedback from our Member station colleagues as possible, around a whole range of issues,” Lara wrote in an email. “The next step is to review all that feedback and to report back to our Members on what we’ve heard. We’ve been clear in all our conversations that we won’t be making any decisions about changes to the proposed clock or its business rules until everybody has had a chance to share their insights.”

Newscast 4 in the proposed clock is “an ideal spot to air local content,” said Noah Ovshinsky, news director at Wisconsin Public Radio. NPR should “strongly consider making it optional,” he said. “If not, the bottom needs to be adjusted to easily accommodate a local newscast.”

NPR has said the changes could go into effect as soon as August, a month before the start of the fall Nielsen ratings period. If it misses that date, it will look to the spring, NPR’s Hooley said during a network board meeting Thursday.