Speaking Thursday during a board of trustees meeting, President Laura Walker said the organization had hired an outside investigator and two lawyers to investigate allegations against the two suspended hosts. The lawyers are also looking into WNYC’s handling of allegations against John Hockenberry, retired host of The Takeaway, and why people didn’t feel comfortable filing complaints about the host. Hockenberry’s misconduct was the subject of an exposé by New York magazine. 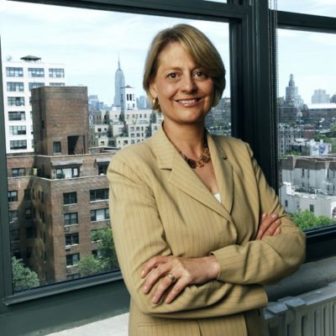 Walker has taken a shellacking for not discussing terms of Hockenberry’s departure from The Takeaway and for declining to explain what actions she took to address his behavior, including his bullying of a succession of female co-hosts over several years.

The board meeting was the first since the harassment scandal erupted at NYPR, and the station invited members of the public and staff to speak during separate sessions. The meeting with staff was closed to press coverage.

About a dozen NYPR donors went to the mikes during the open “feedback” session — roughly a third of those who attended. Most of the speakers described themselves as devoted members. They lambasted NYPR leadership for failures in oversight and transparency, for moving too slowly with Hockenberry and too quickly in whisking Lopate and Schwartz off the air.

“You have these two people disappear as if it’s the former Soviet bloc,” said one member.

NYPR, parent of WNYC and classical WQXR, placed both hosts on immediate leave Dec. 6, “pending an investigation into accusations of inappropriate conduct.”

For the first portion of the board meeting, about 60 people assembled in a conference room in the Hilton Hotel in midtown Manhattan. Walker ticked off a list of measures she has taken and said she hopes will lead to change.

Walker repeated apologies to the victims of harassment, noting, “It’s a time of national reckoning and it’s going to be uncomfortable. But I think change will make us stronger.”

Board chairman Mayo Stuntz Jr. said harassment and discrimination have “no place in our organization — no place in any workplace, anywhere. We are tremendously grateful for the people who have come forward. but it is up to us to make sure that every member of our community feels safe, heard and valued.”

WNYC has been one of the media organizations hardest hit by an outpouring of #MeToo testimonies by women who experienced sexual harassment.  Within public radio, NPR came under fire first for allowing Mike Oreskes, former senior news VP, to remain in the job following harassment complaints from female journalists inside and outside of NPR. Minnesota Public Radio abruptly cut ties to Garrison Keillor, creator and retired host of Prairie Home Companion. At WBUR in Boston, On Point host Tom Ashbrook is on leave pending an investigation of unspecified allegations.

PBS announced Wednesday that it had suspended late-night talk show Tavis Smiley after investigating misconduct allegations against its founder and host. Last month, it cut ties with Charlie Rose.

Public media organizations have special responsibilities to their audiences and donors, as one WNYC member noted during the board meeting. “Your company is different than other forms of media. People feel a connection. Laura [Walker] asks us to support the station because [it is] a trusted, not cynical, news source.”

Trustees listened attentively but didn’t respond to members’ comments or questions, including queries about how they could have known so little about what was happening in an institution they are entrusted to govern.