SAN FRANCISCO — Greater Public honored its outgoing longtime CEO Doug Eichten last week with a light-hearted story of how he came to lead the organization 20 years ago. 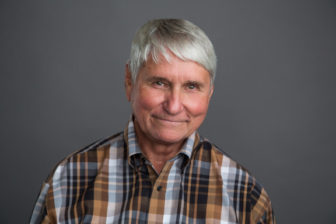 Introducing Eichten for a farewell speech during Greater Public’s annual Public Media Development and Marketing Conference, Greater Public Board Chair Paul Jacobs said that before Eichten became CEO, a search committee was having trouble finding a leader for the struggling organization, then called Development Exchange Inc.

Eichten was a member of the search committee. “In desperation, they asked Doug to leave the room, and he didn’t know any better, so he did,” Jacobs said. Hours later, the committee chose  Eichten for the job.

Eichten brought an unusual background to the role; his “claim to fame” was handling marketing for a horse-racing organization, Jacobs said.

“In hindsight, many of us really believed that Doug got the job because his name fit the acronym of the company — DEI actually stood for Doug Eichten Inc.,” Jacobs said to laughter from the audience.

Jacobs also recognized Eichten for showing empathy and caring for friends and colleagues and recognized Eichten’s wife for her service volunteering at conferences. “Today marks a huge transition for Greater Public,” Jacobs said.

Eichten gave a five-minute address in which he thanked the audience, friends, colleagues and his wife. “Trust in the knowledge that whatever you do, if you are focused on the needs and desires of your audience, you will never go wrong,” he said. 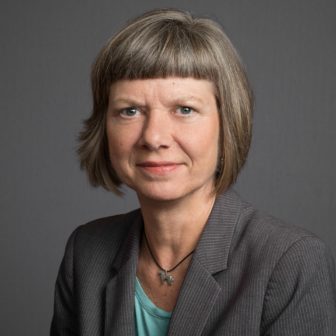 Joyce MacDonald is Greater Public’s new CEO. MacDonald formerly worked as VP of journalism for CPB and in various roles at NPR for 14 years, including director of station relations, VP of a member and audience partnership program, and chief of staff.

In a speech at PMDMC, MacDonald told attendees that she plans to focus on building philanthropy and non-broadcast revenue. Greater Public helps stations with marketing, development and business strategies in addition to staging the annual PMDMC.

Two awards were also handed out at the conference. Mary Dunaway, development director at KNKX in Tacoma, Wash., received the Development Professional of the Year Award from the Public Radio Association of Development Officers. Under her guidance, KNKX raised $7 million in less than six months to buy its broadcast license from its owner, Pacific Lutheran University. Dunaway has worked for the station since she was a PLU student.

“The KNKX story reminds me in these uncertain times of the power of activism and of hope,” Dunaway said. “And mostly I hope that you find meaning in your work every single day, because it most certainly brings meaning to your audiences.”

The Greater Public Benchmarks Award went to KUT/KUTX in Austin, Texas. The award recognizes a public radio station that is either a consistent top performer in raising net revenue relative to audience size or is making dramatic progress in that area.

For each of the past five years, listening to the stations grew by 35 percent, gross audience-sensitive revenue grew by 33 percent and net audience-sensitive revenue grew by 53 percent. Greater Public’s judges were impressed with KUT’s performance and commitment to growing service and fulfilling the mission of public broadcasting in its community, said Greater Public board member Michael Vanderhoef. In 2013, KUT acquired a second signal to provide news and music around the clock.