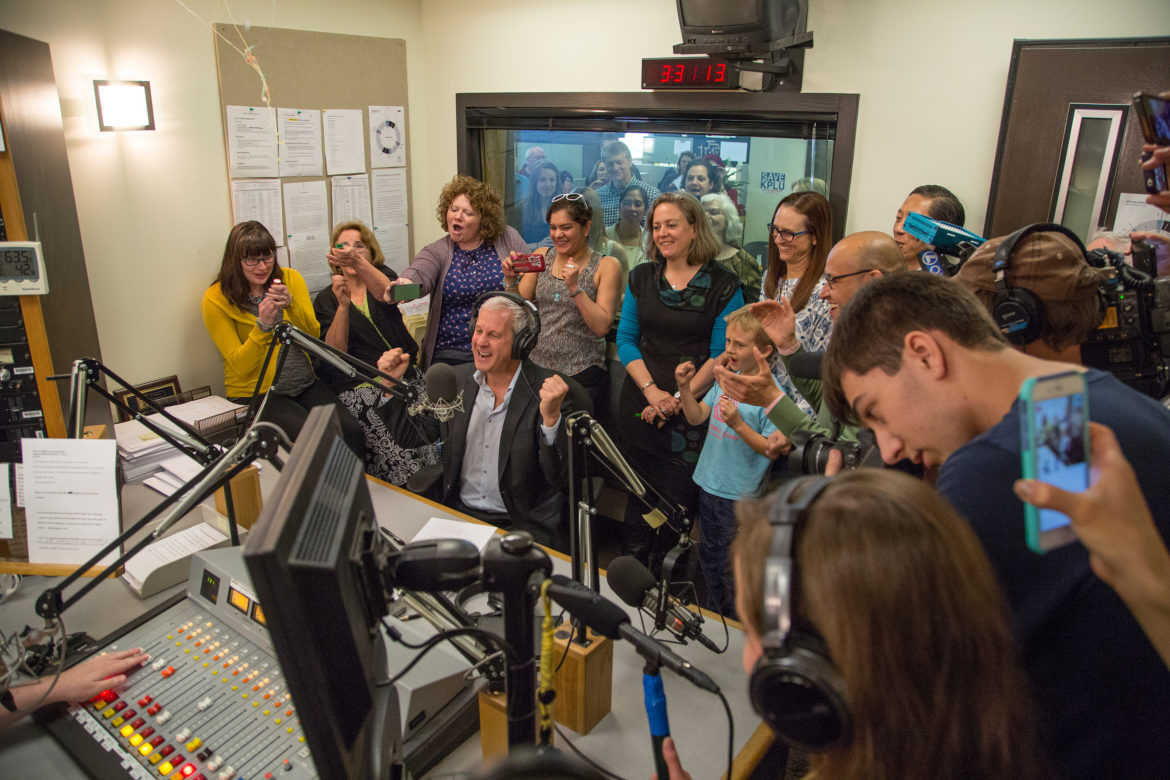 The staff of KNKX, then KPLU, celebrates raising $7 million to buy the station's license in May 2016.

Employees at Washington public radio station KNKX are navigating the ups and downs of freedom from university ownership a year after their successful campaign to buy their independence.

The Tacoma-based station reached its goal of raising $7 million last May to buy its broadcast license from Pacific Lutheran University. PLU’s announcement in November 2015 that it would sell the station to the University of Washington, which owns KUOW in Seattle, sparked a backlash among fans of the station. In response, PLU gave the management of KNKX, then KPLU, six months to match KUOW’s buying price.

But after they succeeded in reaching the goal, their work was only beginning. Over the past year, KNKX’s employees have worked to finalize their status as an independent nonprofit and create a plan to sustain the station’s newfound momentum. Meanwhile they’ve enjoyed audience growth and continued strong financial support from their community — but that support has also brought raised expectations.

KNKX is working to keep the momentum going. Last month the station formulated a draft five-year strategic plan calling for more community events, expanded coverage of regional news and music, an increase in video production and investing in new technologies such as NPR One and Amazon’s Alexa.

The plan “is fundamentally about us, about what we’re doing, about the community, about how the station engages the community and how we report on the community,” said Matt Martinez, KNKX’s director of content. “It’s a huge difference, and one of the biggest differences I’ve felt over the last year as we’re going forward on imagining what the station’s going to be in the next four to five years.”

Listeners probably haven’t noticed much change in the station’s news and jazz programming,  but the familiar on-air sound hides big changes behind the scenes.

As KNKX finds its footing, it’s not getting a free pass from supporters. After it reached its fundraising goal for independence, a major donor asked GM Joey Cohn how the station would handle its higher profile.

Cohn took that as a welcome challenge. Planning an audience-service strategy was once “somewhat of an intellectual undertaking,” said Cohn, who has worked at the station since 1987. “Now it feels much more personal, and it’s really much more about the emotional and personal connection.”

It’s appropriate that KNKX’s call letters, chosen in August 2016, mean “connects.” “A big part of our thinking is, how do we pay the community back for saving us?” Cohn said.

Moving forward, KNKX’s strategic plan calls for a focus on community, education and innovation, Martinez said. Over the next five years, the station aims to stage more free concerts and live public affairs events and host assemblies and performances in schools. It wants to establish an educational initiative to help students and community members tell the stories of members of their community.

“I think they heard from their supporters and listeners when all of this was going on that we don’t want to lose an independent local public media voice. And everything I’ve seen … has taken that to heart.”

It also plans to deepen reporting in more communities in its coverage area. KNKX aims to launch a news program covering areas the station has previously given less attention, including South Sound and the Olympic Peninsula. The show will feature people “that we don’t hear a whole lot of on our air or on anyone’s air,” Martinez said.

KNKX will also look to increase offerings of on-demand content, including podcasts.

The strategic plan also calls for KNKX to expand its playlists, with less repetition of songs and a greater variety of genres. Over the past year the station has added two local programs focused on contemporary and Latin jazz.

KNKX’s leaders believe that moving away from Pacific Lutheran University has helped focus the station’s mission on audience. After gaining independence, “a university isn’t coming to us and saying, ‘We’d like you to do this and do that,’” Cohn said. “Now it’s me working with a governing board and with the community, and together it’s been very collective planning and dialogue between all of us, and that’s leading the path to our future.”

The station is also more able to make changes quickly, Martinez said, rather than navigate the university’s bureaucracy.

“It has changed us for the better because we are able to operate on our own terms,” he said.

Ariel Van Cleave, a Morning Edition producer at KNKX, was driving from Ohio to Washington to start a job at the station when she heard it could be sold. She decided to keep going despite having a guarantee of only four to six months on staff.

Station staffers felt relief when they reached their fundraising goal, Van Cleave said, but it was followed with “a sense of, ‘Well, what do we want to do to improve?’”

At the new KNKX, Van Cleave has noticed more communication between news and jazz staffers as they consider how to strengthen programming and engage each other’s audiences.

Hennessey said that she is “busier than ever” because the news staff has been brimming with new ideas since reaching the goal.

“I’m a little concerned about burnout now because we want to do so much,” she said. “… It feels like the station has the energy of a teenager.”

Listeners appear to be responding to that energy. According to Nielsen data obtained from the Radio Research Consortium, KNKX’s average–quarter-hour listening grew by about 27 percent during the first three months of 2017 over the same period the year before. Average weekly time exposed to the station increased by one hour and 15 minutes over that same time period. And in April, the station reached a record 4.1 AQH share in the market.

Seattle’s KUOW, once KNKX’s would-be buyer, has also enjoyed audience growth. KUOW saw a 39 percent increase in AQH in the first three months of 2017 compared to the same time period in 2016. Average weekly time exposed increased by an hour. Public radio stations in general have seen listening gains across the system.

As KNKX moves ahead with expanding news coverage and other programming, it needs to hire “more staff than we thought we would need in terms of infrastructure,” Cohn said. So far it has hired a member services coordinator, an accounting assistant, a reporter to cover the South Sound and an editor/reporter. Cohn plans to recruit an operations director in coming months.  The annual cost of the two reporters and operations director totals about $280,000.

Under the strategic plan, eight more positions will be filled in coming years, including roles in news, video production and its streaming jazz service, Jazz24.

‘Doubling down’ on a unique sound

Since its $7 million campaign for independence, donations to the station’s on-air drives have increased dramatically. KNKX raised more than $900,000 in its fall fund drive, double the amount it has typically raised. The spring pledge drive, which usually brings in $250,000, raised more than $400,000 this year.

“People want to see them succeed,” said Coulson, a KNKX listener and former KPLU employee. And KNKX has successfully persuaded listeners that it continues to need support beyond its $7 million goal to operate independently, Coulson added.

“You wish there was one-stop shopping. … ‘Hey, help us build a radio station. This guy has all the answers.’”

Coulson will watch in the coming years to see “how long of a tail” KNKX’s story of independence will have. “To me, it’s such a great story,” she said. “I have a feeling that people will latch onto that for a long time.”

To longtime listener Frank Catalano, KNKX has “doubled down on what makes them unique.” A Seattle resident and executive at an education technology company, Catalano decided to double his donation this year as a token of his happiness with the station.

When the station’s sale seemed imminent, Catalano said, he worried that “a lot of the things that make what is now KNKX fun and different than a lot of dry and traditional public media would go away. And that has been maintained and actually expanded.” KNKX often features a “quirky sense of humor” and banter among hosts, said Catalano.

“I think they heard from their supporters and listeners when all of this was going on that we don’t want to lose an independent local public media voice,” Catalano said. “And everything I’ve seen from listening to them — I listen every day — has taken that to heart. It’s not that the local stuff is a throwaway or that they throw in a few repeat headlines. They really do cover local.”

Station employees knew the transition to independence from PLU would take “a little bit of work,” Martinez said. But “it was pretty amazing, the amount that we had to do to make it happen.”

When he thinks back to last May, Martinez said, “I look back at me during that time, and I’m like, ‘Man, you were so naive.’”

One of the biggest difficulties the station has faced is developing the back-end infrastructure previously furnished by PLU, including human resources and payroll systems.

“Everything from time off to how to behave in the workplace — [for] all of this stuff, we had relied on a larger institution to help sort it out,” Martinez said. “We just finished the handbook, of all things. It’s just been a lot of work.”

“You wish there was one-stop shopping, right?” he said. “‘Hey, help us build a radio station. This guy has all the answers.’ No, you have to reach out to a lot of people, and we did.”

KNKX must also find a new home. The station negotiated an agreement with PLU to continue operating from its on-campus studio through June 2019.

The search for a new headquarters will require KNKX to launch a capital campaign just a year after raising the money to buy its license.

“Would I prefer we weren’t in that situation? Yes,” Cohn said. “Because we want to be careful with all this. People have been so generous. … It’s the next challenge for us.”

The station has called on a mix of paid and pro bono consultants to help with the transition. Cohn also sought advice from Neil Best, GM at KUNC in Greeley, Colo., who led his station to independence in 2001. The station raised $2 million in 20 days to buy its license from the University of Northern Colorado.

KNKX took an important step by not making its campaign of independence about saving employees’ jobs, Best said. Instead, it focused on what makes the station unique in the market.

Maintaining a distinct identity from its former university owner has also been important, Best said, and was strengthened by its adoption of new call letters. Best said he regrets that he didn’t make the same decision when KUNC became independent. Community members still assume that the station has ties to the school.

KNKX now faces the “heavy responsibility” of a station rescued by its community, Best said.