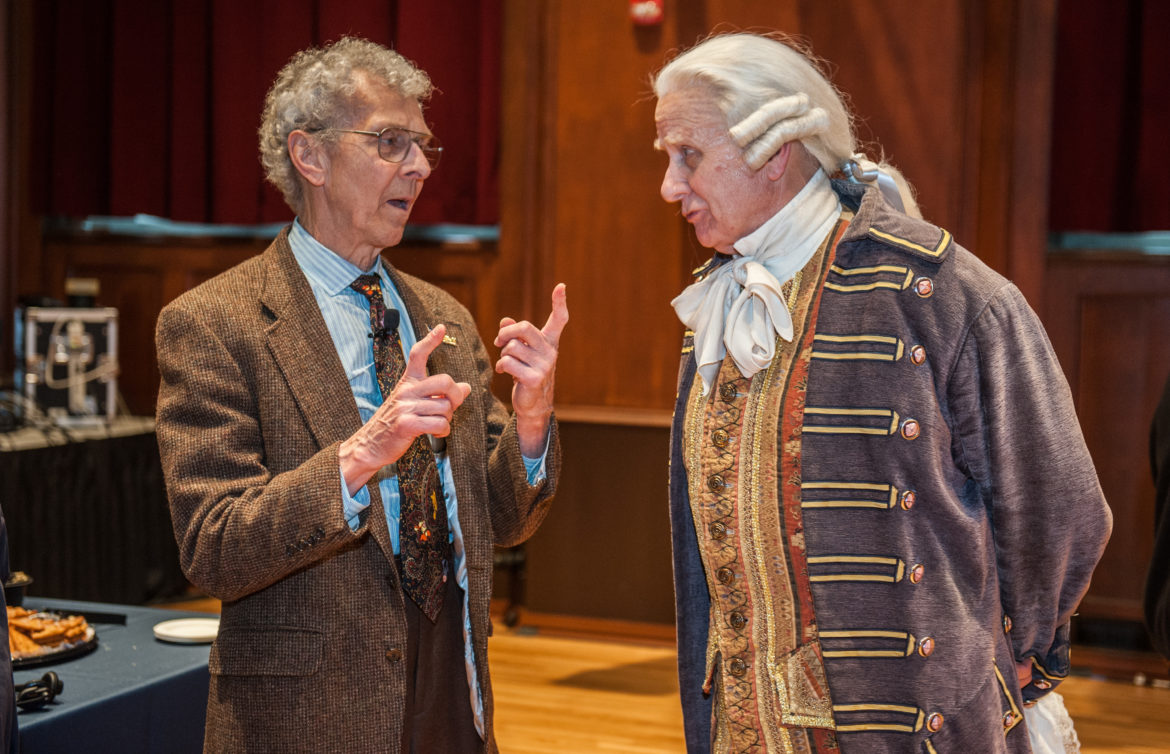 Chitester chats with actor Richard Henzel, who portrayed Scottish economist Adam Smith at a 2016 screening of Free to Choose Media’s "The Real Adam Smith" in Chicago.

Bob Chitester, whose libertarian-leaning Free To Choose Media grew from a 1980 public TV series with economist MilTon Friedman, will retire from the production company later this summer.

Chitester said he’s looking forward To a reduced role. “Not in a sense of cutting back on work,” he said, but rather being able To focus on particular documentaries and preserving his vision for content — a unique approach To ediTorial balance shared by few other public TV producers.

Chitester prefers that Free To Choose Media not be considered in political terms. “Differences of opinions tend to be characterized politically,” he said. “We are about the winning ideas of freedom.” Chitester defines those as “ideas that over time humans and tried and tested and they work.”

One offering, India Awakes, was Free To Choose’s most widely aired documentary within the past two years, according to TRAC Media Services, garnering 1,534 telecasts in 108 markets for 76 percent coverage. The 2015 documentary, presented by WTTW in Chicago, “explores an inherited British bureaucracy which created layers of rules and regulations,” according to a program description. “However, globalization and economic liberalization have created fluidity between classes — and greater ambition.” 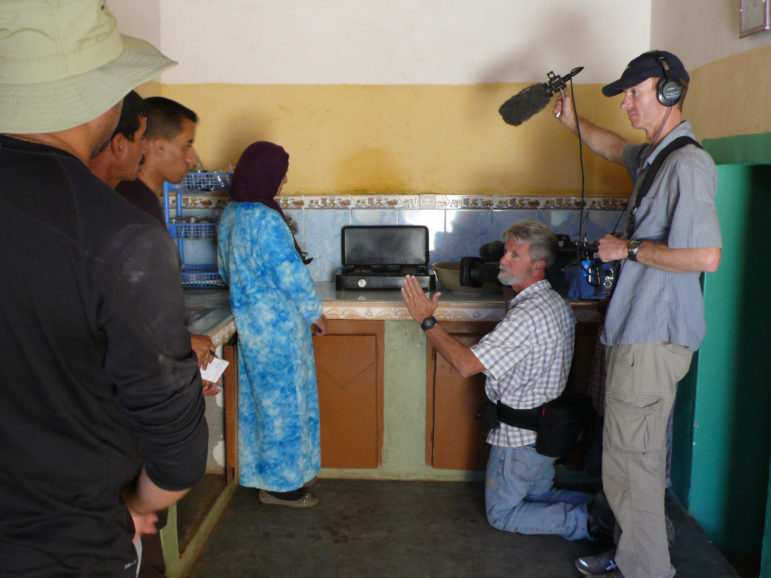 Crew members gather sound for Free To Choose’s Power To the People, a documentary that examined energy challenges, such as the hazards of cooking over open flames indoors.

Power to the People With Johan Norberg, another popular 2015 program presented by WTTW, features the CaTo Institute senior fellow exploring energy innovations. “The controversy over America’s promising new energy source in hydro-fracking is also examined, as is the folly of top-down government-imposed solutions,” the program description says. “… Although daunting, the energy challenge can be met, Norberg believes — especially if governments step back from top-down imposed solutions.”

Free To Choose’s approach to programming with a point of view troubles at least one public TV programmer. “Personally, I think their content has a point to make — that regulation stifles economic growth,” said the executive, who requested anonymity to speak frankly. He scheduled India Awakes but passed on other offerings. “I’m not saying I wouldn’t air programs that are outside of my point of view, but there doesn’t seem to be any real balance” in the shows, he said.

Another programmer and a general manager declined to comment on why they chose not to run Free To Choose programs.

Roots of ‘Free To Choose’

Chitester’s public broadcasting career dates to the early days of the system. He developed educational television at Buena Vista High School in Saginaw, Mich., and Edinboro State University in Pennsylvania. In 1966 he became the founding general manager of WQLN-TV and WQLN-FM in Erie, which he led until 1982.

But Chitester is best known for his longtime association with Milton Friedman. Their introduction through mutual friends decades ago led to Free To Choose, a 10-part series in which the Nobel-winning economist advocated for free-market economics. Chitester’s approach to that series helped form his philosophy about public media content. 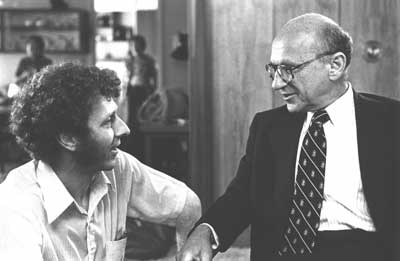 Chitester and Friedman developed the program as a counterpoint to The Age of Uncertainty, a 1977 public TV series by Harvard economist and liberal intellectual John Kenneth Galbraith.

Initially, Chitester recalled, CPB had indicated it would back the project with $500,000. Two Top PBS executives asked how Chitester would balance the program editorially.

“I told them, ‘I don’t intend to. This is a response to, and balance of, the 13 hours of John Kenneth Galbraith that you’ve already broadcast,’” he said.

After that chat, the CPB funding “never appeared,” Chitester said. He raised the money privately.

“I want people in public broadcasting to consider what is represented by that exchange,” he said. “I believe public TV hasn’t done an effective job assisting U.S. citizens in understanding issues when every program must have the balance within it.”

“No issue, no idea, no philosophical concept of any real import can be well explained to someone in less than an hour,” Chitester said. “If we constantly insist on someone telling the other side, we create a situation in which viewers benefit far less.”

He uses the example of political conversations on cable news channels. “There’s a spokesperson and somebody on a split screen yelling at them,” he said. “Why? To give the impression of balance.” But that approach doesn’t help anyone to better understand issues, he said.

As for Chitester’s attitude that Free To Choose balances other content on public television, “I don’t believe that,” the station programmer said. “That’s the general whitewash we always get, as ‘liberal public television.’ And it’s just not the case.”

‘It’s not about politics’

Since the original Free To Choose series, the production house has created more than 500 programs. Recent topics include an exploration of the role of the military in a free society, a critique of President Obama’s foreign policy, a look at the human cost of welfare and an overview of capitalism in Sweden.

The conservative-leaning content has attracted controversy at times. Turmoil and Triumph: The George Shultz Years, a flattering look at the former Republican Secretary of State, prompted “several hundred emails” to PBS Ombudsman Michael Getler, he wrote in July 2010.

“This series, for me, as a viewer and an ombudsman,” Getler wrote, “created at least the appearance of a conflict of interest; a portrait so glowing that it overwhelms whatever modestly critical elements are included, that does not easily fit the designation one usually associates with a documentary, and that is indeed funded in part by associates of the subject.” Funders included  the Stephen Bechtel Fund and Charles Schwab; Schultz served on the boards of both. Another funder, Peter G. Peterson, was a colleague of Schultz’s in the Nixon administration.

“Their connections to Schultz had nothing to do with any of the content of the series,” Chitester told Current, “and we had no communications with any of them except prior to production to ask for support.”

Chitester describes his current funding sources as “all over the ballpark. Very little if anything comes from corporations.” Most support comes from foundations, “primarily from wealthy individuals who are libertarian or conservative in perspective,” he said.

But Chitester added that “we don’t get money from individuals that we’d consider ideologically intensely driven.”

He said that “on two occasions over the last 30 years I returned checks, because the funders expected to be given a chance to review content.” A few others discontinued support because the content wasn’t “aggressively ideological” enough, Chitester said, adding that the production house is not “a work for hire company. I decide on projects and then seek funds.”

According to Chitester, the top three funders in the past year were the Diana Davis Spencer Foundation, which says it backs projects espousing “freedom and individual responsibility”; the DKT Liberty Project, “founded to promote individual liberty against encroachment by all levels of government”; and the L.E. Phillips Family Foundation, which supports other public media content from stations including Wisconsin Public Television and WYES in New Orleans.

“Our funders understand we are trying to engage people in a national Socratic discussion,” Chitester said. “It’s not about politics.” 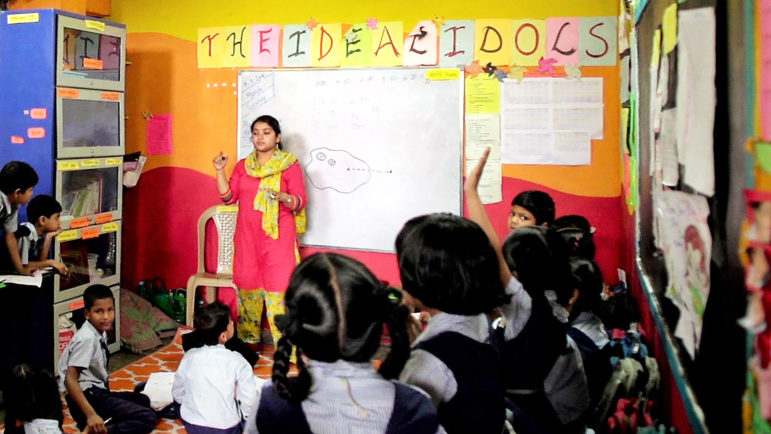 A teacher in India lectures in a classroom featured in School Inc.

Free To Choose documentaries focus on a range of issues. WNET is airing three this spring and summer: School Inc.: A Personal Journey with Andrew Coulson, which examines the lack of innovation in education reform in the U.S.; the foreign-policy examination Is America In Retreat?; and Work & Happiness: The Human Cost of Welfare, about life on public assistance.

Work & Happiness is “a mixture of economic and political analysis told through stories of a half-dozen accessible and interesting characters,” Segaller said. “It talks about the traps people get into on welfare. They spend so much time in bureaucratic offices to make sure they don’t lose their benefits, so it’s hard to interview for jobs. It’s clearly a reality for some people.”

WNET partnered with Free To Choose on School Inc.: A Personal Journey with Andrew Coulson. The late filmmaker and author was senior fellow of education policy at the Cato Institute’s Center for Educational Freedom. The station and Free To Choose helped finish the project after Coulson was diagnosed with terminal cancer. The series creator, writer and host, Coulson examined educational systems in the U.S., South Korea, Sweden, India and Europe, asking why those countries innovate in school reform when the U.S. does not. The film went out to the system as a PBS Plus offering in April.

“That should be the key approach to our efforts,” Chitester said — giving “inquiring minds” like Coulson, an expert in education reform, a chance to share their opinions on public TV, he said.

But finding a successor that shares that mindset apparently can be tricky. Chitester previously tried to step away from his post. Last September, Free To Choose announced his replacement: Joe Reinkemeyer, a filmmaker, attorney, entrepreneur and educator whose screenwriting credits include L.A. Law, Law & Order and Buffy the Vampire Slayer. But by the next month Reinkemeyer was gone. Free To Choose released a statement at the time that “after further consideration, both parties have decided not to proceed with this change of leadership.”

A Free To Choose spokesperson declined to discuss Reinkemeyer’s departure. Chitester remains focused on finding a replacement. He and his board are interviewing three candidates and plan to announce a successor next month for the Erie, Pa.–based production company.

“Go back and read the Carnegie Commission report,” Chitester said. “I have an original dog-eared copy. There’s nothing in there about minute-by-minute balance. It says, let’s have all views coming forward.”

If viewers disagree, “that’s stimulated thinking,” he said. “Public TV viewers have that intelligence. And a lot more would watch if they felt they were being respected — and they could get away from all that yelling.”