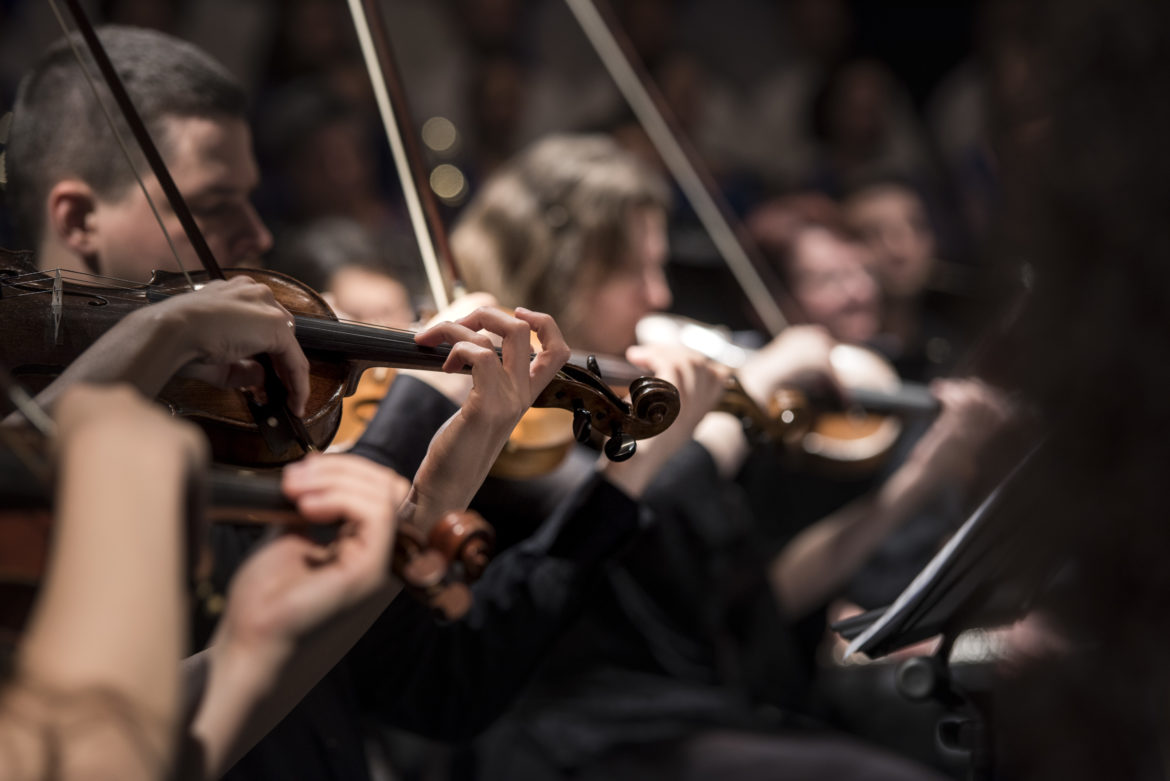 Over the years, classical music radio stations have often looked outward to understand their audiences and gauge demographics, music preferences and methods of consumption. A new survey, however, takes an inward look at the people behind the microphones and management desks of classical music stations across the country. Among other findings, it paints a picture of an aging workforce, spread across stations sometimes doubtful about the format’s future but anxious to beef up classical’s presence on digital platforms.

Classical Music Rising is releasing the study’s findings at a time when stations’ approaches to classical are changing, according to SRG co-CEO Tom Thomas. “We’re coming through a very significant pivot in classical music radio,” Thomas said. “The essential story is no longer the erosion of the number of hours that classical music is being presented. Now we’re in a resurgence period with the emergence of all-classical stations within organizations that had cut back on classical hours, buying frequencies and pursuing opportunities where they can.” As an example, Thomas pointed to WWNO in New Orleans, which recently launched an all-classical service on a new FM signal.

The results of CMR’s study show a workforce that is middle-aged and predominantly male and white, likely not a surprise to many in the industry. Yet the findings are nonetheless illuminating and offer an opportunity to chart a new path forward. 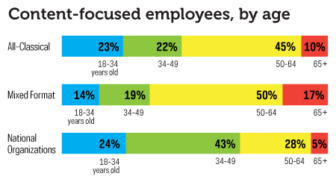 Although the ratio of men to women was slightly more equitable at the overall workforce of mixed-format stations, the disparity remained among those whose duties involved hosting, production and management. Only 10 program/content director positions are currently held by women, all at all-classical stations. 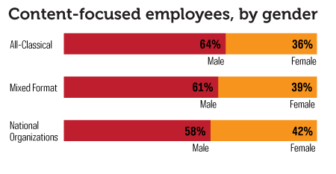 Wende Persons, managing director of Classical Music Rising, said the system’s classical staffers are “experienced and talented.” But she added, “We have many announcers and hosts approaching retirement age, no clear plan for replacing them, and substantial questions about who is going to be able to engage new and diverse audiences not only on-air but in fast-expanding digital spaces.”

Indeed, the age of on-air talent is a significant concern to many station leaders who participated in the survey, though they cited varying reasons. “Some of [our staff] are pretty old and our attrition has been directly related to some of our programmers dying,” writes a respondent from a mixed-format station. Another, also from a mixed-format station, said that “if one of them quits or retires, I’ll be very short-staffed.”

Still more responses reveal a fear that departing hosts at mixed-format stations would jeopardize the format’s survival on their airwaves. And station leaders cited other sources of consternation.

“Honestly, I worry more about whether the older announcers will retire gracefully than how to replace them,” wrote a respondent from an all-classical station. “They are still valuable but show signs of ‘wear.’ I don’t want to have to fire them, but they don’t seem to be thinking ahead.” Another said their aging classical staffers are “stuck in their ways, not mission-oriented, and resistant to research.”

This frustration about older staff is perhaps a byproduct of classical stations’ increasing desire to pour greater resources into digital initiatives. When asked which positions stations wanted to create in the next year, most responded with “host/announcer.” But the second–most-referenced position was “digital/web producer.”

Yet stations also expressed worries about not only how to train employees to use new technologies, but also how to pay for that training and the platforms themselves. More classical employees at mixed-format stations are feeling the pressure of limited resources than workers at all-classical stations, according to the survey. And many involved in management, marketing and web production for classical music at mixed-format stations must also focus on other content.

The report noted that “the top priority for all-classical stations is new positions related to adding new digital roles and/or increasing the digital skill-set of hosts and producers.” At mixed-format stations, top priorities centered more on adding on-air talent, with less of a concern for digital growth. Both formats also expressed a desire to improve efforts at community engagement.

But the working group concedes that many of these recommendations require resources beyond those currently available to many stations.

The group also recommended raising the profile of classical music within public media “so that it is regarded as an essential audience service and innovator alongside news and information.” This is probably the most ambitious recommendation and the one most open to interpretation. Given the perception of stagnation and seeming disregard for the format held by some station leaders, it may also be one of the hardest to implement and quantify. But it’s encouraging that Classical Music Rising exists at all and is taking stock of this small but important component of the media landscape.

Complete materials from the survey are available at SRG’s website.

Joe Goetz is music director at news/classical radio station WFIU in Bloomington, Ind. He has been a classical music broadcaster since 2005 and has worked at KCME in Colorado Springs, Colo.; KBAQ in Phoenix; and Vermont Public Radio. He also maintains the blog Scanning the Dial, offering opinions on the state of classical music radio.