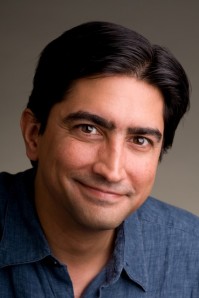 Arun Rath will join NPR in late September as host of Weekend All Things Considered, which is relocating to studios at NPR West in Culver City, Calif.

Rath currently covers national security and military justice for Frontline, where he has worked since 2005.

He wrote and produced three films for the investigative documentary series on PBS, including “Rules of Engagement,” looking into war crimes allegedly committed by U.S. Marines in Iraq. Rath also reports on music for the PBS series Sound Tracks.

Before joining Frontline, Rath worked at WNYC in New York as a producer for NPR’s On the Media and as a senior editor for Public Radio International’s Studio 360. He began his journalism career as an intern for NPR’s Talk of the Nation.

NPR plans to reinvent WATC in some ways when Rath signs on and the show moves to NPR West, a production center located outside of Los Angeles, according to NPR spokesperson Anna Christopher Bross. The show will take advantage of greater access to the city’s industries and will add to the network’s reporting on national and breaking news from the West Coast.

Former WATC host Guy Raz left the show in December to host NPR’s TED Radio Hour. Jacki Lyden has been filling in during the interim.

Dan Grech, news director for the reporting partnership between the Miami Herald and WLRN-FM, was dismissed July 8.

WLRN General Manager John Labonia told staffers and other pubcasters in an email that Grech “is no longer with WLRN Miami Herald News, effective immediately. A national search will be conducted to identify a replacement.”

On July 18, Labonia announced that Alicia Zuckerman, senior editor for enterprise reporting, would fill in as interim news director during the search for his successor. “Please be assured that the recent changes within the department will in no way have a negative impact on the direction, strategic plan or current operations of WLRN Miami Herald News,” he said in an email to staff.

Labonia declined comment to Current on Grech’s dismissal. Grech did not respond to phone and email requests for comment.

Grech joined the station as news director in February 2010. Previously, he spent a year as the Ferris Professor of Journalism at Princeton, where he taught “The New Age of Audio Journalism,” the university’s first audio-production course. From 2004–09, he covered Latin American economies and Hispanic business in America for American Public Media’s Marketplace.

At the station, Grech oversaw reporters and editors across all platforms for WLRN Miami Herald News, which began 10 years ago. In May, the partnership brought NPR into the collaboration to expand news coverage of South America.

Zuckerman started her public media career at New York’s WNYC, where she reported and produced for NPR’s On the Media and later worked in the local newsroom covering arts and other beats. Her reports have been picked up by NPR newsmagazines as well as major series distributed by Public Radio International such as The World, Studio 360 and This American Life. Zuckerman has worked with WLRN since 2008, and she recently won a 2013 national Edward R. Murrow Award for feature reporting.

WGVU in Grand Rapids, Mich., is hosting a fellow from The Mission Continues, a community-service organization that helps military veterans transition to civilian leadership roles.

Retired Navy Lt. Cmdr. Eddie Lee served from 1988 to 2009 in the supply corps, handling logistics, combat support and contracting. During his six- month fellowship at the Michigan station, he will coordinate events for the station’s Engage Veterans initiative, which culminates Sept. 21 with Military Appreciation Day. The station expects to draw up to 20,000 participants to licensee Grand Valley State University for the event, according to Timothy Eernisse, WGVU spokesperson. Lee will enlist community organizations and assist in marketing, social media, event planning, execution, post-event analysis, outcome reports and more.

“Our veterans thrive when organizations like WGVU step up and give veterans opportunities to meaningfully contribute here at home,” said Spencer Kympton, president of The Mission Continues. “In turn, the veterans provide the organizations with unique skills and leadership, developed through their military service.”

WGVU is the first public broadcasting station to participate in the community-service program, spokesperson Laura L’Esperance told Current. A second fellow is scheduled to serve at St. Louis Public Radio soon, she added.

The Arsenio Hall Show, premiering nationally Sept. 9 from CBS Television Distribution, has hired several former and current production staffers from the PBS talk show Tavis Smiley. Three key staffers left in unison in February and have taken similar jobs on the new CBS broadcast. Neal Kendall, who shared executive producer and writer credits for nine years with host Tavis Smiley, joins Hall’s show as e.p.; Luke Sader is a talent producer; and Stephanie Story is a coordinating producer. More recently, Christopher McDonald, a senior producer for Smiley, left to become Hall’s music producer, and Holly Crosby joined the new program as a coordinating producer. Jacoba Atlas, who launched production of Tavis Smiley during her tenure as PBS’s co-chief program executive, is now serving as the show’s e.p. “We have a great staff,” she told Current. “This is Tavis’s 10th year on PBS, and he plans 10 more. This turnover has allowed Tavis to bring in new people, which has worked out wonderfully.”

Masterpiece’s Erin Delaney is the 2013–14 Margret and Hans Rey/Curious George Producer, awarded annually to an outstanding WGBH producer. Delaney produces, handles creative direction and develops strategies for the iconic series; her credit appears on such shows as Downton Abbey, Sherlock, Foyle’s War, Wallander and The Complete Jane Austen. The Reys were authors of the Curious George children’s book series that was adapted into a popular PBS Kids show. The award enables a WGBH producer to focus on a topic that reflects the Reys’ interests, such as science, public affairs, arts, health and children’s programming. Delaney is the ninth employee of the Boston station to receive the Rey Producership since its inception in 2000.

Elana Gordon has joined WHYY’s Newsworks as health and science reporter for radio and the Web. She arrives at the Philadelphia station after nine years at KCUR-FM in Kansas City, Mo., where she covered health care for six years and earned recognition in 2012 as the city’s best reporter by alternative newspaper The Pitch. Gordon has also completed fellowships with NPR and the Knight Foundation and contributes content to NPR, Kaiser Health News and PRI’s The World. “It was gratifying to be able to find a reporter of Elana’s skills and depth of knowledge about health care to fill this role,” said Chris Satullo, v.p.  of WHYY news and civic dialogue.

Sam Hudzik took over as news director for New England Public Radio July 8. Hudzik spent the past year as one of 19 Knight-Wallace Fellows at the University of Michigan in Ann Arbor and previously spent five years as a political reporter for WBEZ-FM in Chicago, covering the election of Mayor Rahm Emanuel and the corruption trial of former Gov. Rod Blagojevich. Before WBEZ, Hudzik worked as an independent producer/reporter in Chicago for NPR newscasts and All Things Considered, American Public Media’s Marketplace and the BBC World Service. Hudzik “has had a variety of experiences covering news at the local, state and national levels, across issues and topics, and is an excellent editor,” said Helen Barrington, NEPR’s executive director for programming and content.

José Fajardo, former president of WMFE in Orlando, Fla., has accepted a position as executive v.p. of Orlando Inc., a regional chamber of commerce. After departing the station in 2012, Fajardo created Twelve Consulting. During his nearly 20 years in pubcasting, he served on the boards of NPR and the Association of Public Television Stations.

President Barack Obama on June 21 nominated Lori Gilbert, news director of commercial Elko Broadcasting Co. in Elko, Nev., to serve a second term on the CPB Board. She previously served from 2008–12, arriving as an appointee of the Bush administration. Gilbert is the president’s fifth nominee to fill vacancies on the corporation’s board.

Public Radio International appointed two directors to its board, Minneapolis-based philanthropist Blythe Brenden and businessman Ed Schneider, co-founder of Triton Container International Ltd., a marine cargo container company. “Ed’s business acumen and non- and for-profit board experience will guide PRI as we navigate through a rapidly changing media and technology environment,” said Alisa Miller, PRI president. “Blythe’s deep roots in Minneapolis and support of the issues of health/medicine, women and children, and the arts — all topics that PRI explores through its content — will enable us to strengthen our community presence.” Two directors on the 17-member board are departing: Lawrence Wilkinson, chair of San Francisco consultancy Heminge & Condell, who has met his term limit; and James Hale, a founding partner of FTV Capital in San Francisco, who resigned due to other commitments.

Jamie Parker, former v.p. of marketing and communications at WGBH, is now president of the Boston-based Greenough public relations agency founded by her husband, Phil Greenough. In addition to supervising the company’s operations, Parker will develop a new practice area serving mission-based nonprofit organizations. At WGBH she led the unit overseeing corporate communications, local and national promotion and marketing, branding and visual communications, audience research and advertising and on-air promotion. Previously she was s.v.p. of brand communications at Arnold Worldwide and president of Weber Shandwick Cambridge’s technology practice.