Live events draw an audience that isn’t typically served by public media and are the future of the industry, according to a report released Friday by the Association of Independents in Radio.

The report, “Break Form: Making Stories with and for The People,” contains lessons gleaned from Finding America, the latest iteration of Localore. The CPB-funded AIR project embedded independent producers at public media stations from November 2015 to July 2016 to take nontraditional approaches to storytelling in communities.

Among the report’s findings is that social platforms — such as church services, hot-dog wagons and food pantries — are as important as social media for the future of public media. As part of Finding America, AIR produced 41 live events in cities including Philadelphia; New Orleans; Kansas City, Mo.; Richmond, Va.; Harriman, Tenn.; and Tucson, Ariz. Producers also experimented with “live platforms,” such as bike rides and “story mailboxes” for collecting stories. 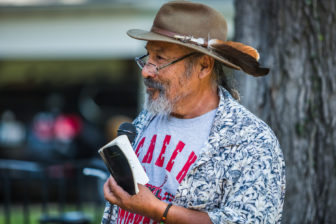 “These are the places we are building a new public media, but not places where public media is well known — or even recognized,” the study says.

An Edison Research study of six events staged in June 2016 found that attendees were more ethnically and socioeconomically diverse than typical public media consumers in their communities and among the general audience, which tends to be older, whiter and wealthier. Attendees were “highly representative” of the areas where the events were held and tended to live in close proximity to the event, the Edison study found.

The events were held in “unusual” community spaces, the study says, such as a roller skating rink in Baltimore, an elementary school in New Orleans and a drive-in theater in Watertown, N.Y.. They brought together people who aren’t usually in the same room — “public media’s traditional audience and community members who don’t tune into public media,” the study says. For example, “Precious Lives: Before the Gunshots,” a project focused on gun violence in inner-city Milwaukee, held live events featuring teenagers who shared personal stories about living with gun violence.

Public media can attract new audiences by bringing different groups together around a shared interest and using a wider lens when telling stories about people who are considered “marginalized,” according to the study. 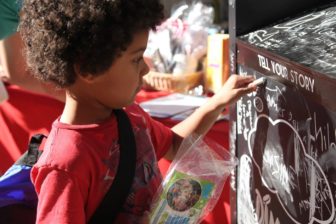 A child writes on a mailbox stationed at the Tucson Festival of Books by the Localore project Dímelo. (Photo: Sophia Paliza-Carre)

Online engagement isn’t a substitute for in-person engagement, according to the AIR study. It recommends that public media outlets partner with local artists to create physical engagement tools and consider design as a form of engagement. Frontier of Change, a Finding America project produced by KNBA in Anchorage, Alaska, partnered with local artists to create an interactive audio scavenger hunt that explored the city’s recent history and rewarded participants at each stop with limited-edition prints by the artists.

Engagement by design includes attention to colors and objects that reflect an understanding of the people in the community. Dímelo: Stories of the Southwest, a project in Arizona, created “story mailboxes,” receptacles for collecting stories that doubled as public art. The boxes drew more stories when they were redesigned to attract more attention and be kid-friendly.