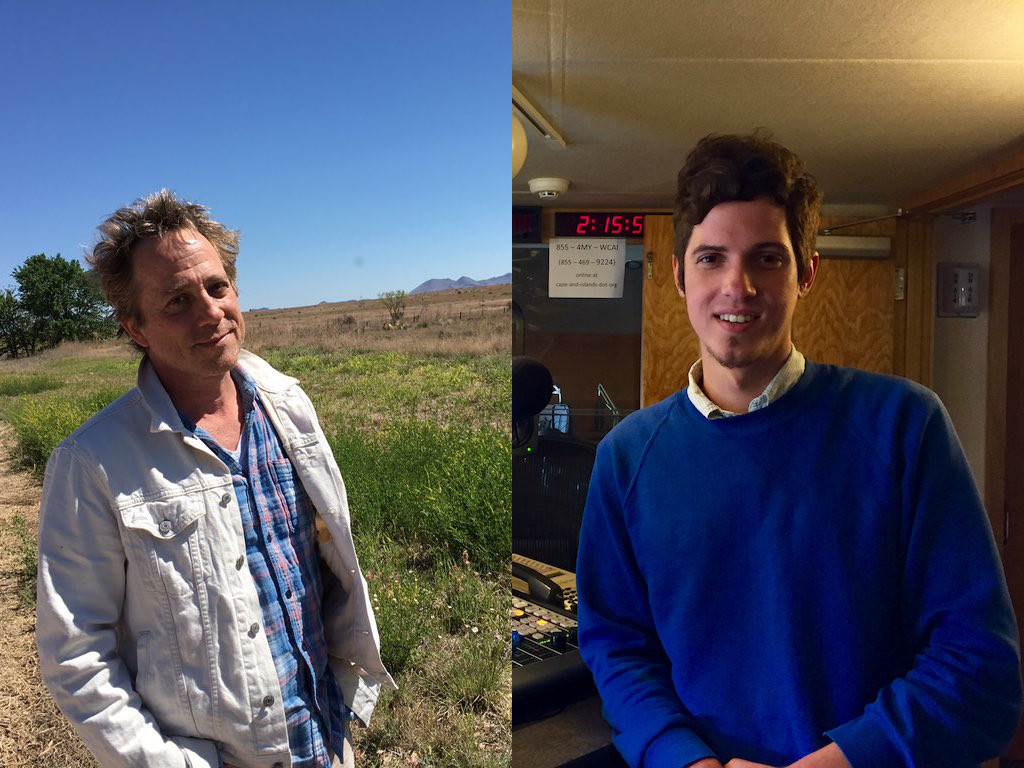 This spring, two small, like-minded public media organizations separated by thousands of miles are participating in a radio exchange, swapping on-air hosts. For three weeks, Steve Junker of WCAI is in Marfa, Texas, to host Morning Edition, while Travis Bubenik of Marfa Public Radio lives in Steve’s house in coastal Massachusetts to host All Things Considered. The two hosts share their thoughts here about how this public media experiment is affecting their routine, their stations, and their communities. (Portions of this post previously appeared on the websites of WCAI and Marfa Public Radio.)

So much of what a host does in a smoothly running show is dependent on muscle memory. Duck that fader, launch that spot, glance to the clock, glance to your copy, read, pot up — and you’re out at the post.

Working in an unfamiliar studio means that everything has been altered. The fader feels different, the clock isn’t in the same place, your copy is stuffed with unfamiliar town names, and — if you’re hosting a show you don’t normally host — the post seems unnatural.

There are bumps and hitches in hosting at a different station. (Reminder to self: Don’t announce the wrong call letters.) And you make the kind of mistakes you haven’t made in a long time. But it’s also thrilling.

That gee-whiz sense of wonder about making radio is restored. I’m sitting in the front window of a former gas station, broadcasting across tens of thousands of square miles to pickup trucks, ranch offices, and Border Patrol vehicles. Radio, I remember all over again, is a miraculous way to communicate.

In the weeks before launching this host exchange project, Travis Bubenik and I worked to communicate to our listeners what we were planning and how we hoped it would create fresh and interesting radio.

We broadcast introductory interviews with each other, we ran promos, and we talked about the project on air. We wanted to make sure listeners understood why an unfamiliar voice would be talking to them for three weeks. We also wanted listeners to know how they could participate in and follow the bigger story, getting to know their exchange community, from West Texas to the North Atlantic, to Marfa from Martha’s Vineyard.

As we get going, the challenge now is to keep it engaging and informative, helping listeners to learn about — and care about — another community.

We’re using social media, mainly Twitter, for a running conversation about the differences and similarities. And we’re producing pieces for broadcast. The goal is to produce an audio essay, with local sound, at the beginning of the week, each host preparing one for his home station. Then, at the end of the week, we record two-ways between the hosts, one for each station. One host interviews the other, trying to draw out impressions and moments of recognition.

We’re also producing sonics of “local sounds” to send home (cattle bellowing in West Texas, the drawbridge going up in Woods Hole). I’m also making a series of brief sonics in which desert-dwellers explain to me what I need to know about West Texas (“What’s essential music here for driving? Is it ever okay for me as a New Englander to wear cowboy boots? How do you deal with Border Patrol stops?”)

Marfa Public Radio’s General Manager Tom Michael joked that this host exchange is country mouse and country mouse. It would be a different project if the stations were of different sizes — for example, a big city station and a smaller rural station. But it may not have been as memorable an experience for listeners.

If this was strictly a professional exchange — one person for one person, newsroom to newsroom — it could still benefit the participants and the newsrooms. And I think it would have been simpler than what we’re trying to do: create a wider conversation between our communities.

Bubenik in the WCAI studios

When Tom Michael first approached me to ask if I wanted to swap jobs with another public radio host on Cape Cod for three weeks, my response was, “Uh, chyea dude!”

But my second response was more measured: “What will listeners get out of this?”

To be honest, that question made me nervous, and halfway into this thing, it still sorta does. Three weeks isn’t necessarily the longest time to pull real substance out of an experiment. But I’m feeling good about it. We’re delivering.

In the few dispatches Steve and I have each sent home, we’ve talked about how “distance” is all context and experience, we’ve pondered the similarities between our differently scaled tourist economies, and we’ve tried to figure out why the hell people choose to live in weird places like Marfa TX and Woods Hole MA. (Hint: those places are awesome.)

As long as we’re telling stories worth telling, we’re fulfilling our mission, and listeners seem to be digging it, based on the tidbits of feedback we’ve gotten so far.

Yes, our focus is on-air. But the institutional sharing of knowledge that’s happening behind the scenes is proving to be more valuable than I ever imagined.

WCAI and Marfa Public Radio are similarly sized stations, but really, Marfa’s the smaller and scrappier of the two. We’ve got six employees while WCAI, with the backing of WGBH in Boston, has 15 or more. To me, this old sea captain’s house I’m working out of here on the Cape is the Taj Mahal. They have a newer and nicer board, more soundproofing in the studios, and other technical advantages.

Having the chance to sail along on a more robust ship makes you realize the little things your station can do to sound more pro.

Those are some of my actual reactions to WCAI’s operation so far.

Still, there are upsides to being Marfa-scrappy.

For instance, I’m not down with NewsBoss — the copy-and-cuts–sharing software WCAI and other stations use. It’s old. Clunky. Looks weird. Takes a crazy amount of what I can only describe as “tech bureaucracy” to get a story to air.

In Marfa, I read my newscasts off Google docs. Then, between on-air breaks, I drop news cuts and stories into our automation system. I have a lot of freedom to move, add and drop stories throughout the show at will. It seems like NewsBoss bogs down that process. Or I’m just not that good at using it yet. Either way, I’m realizing I sorta like the freedom of being a more “manual” host at a lower-tech station. Pros and cons!

I’ve been thinking about whether this exchange is something other stations should do, or could do. Wondering whether it’ll start some trend. I’m sure many people in the industry are looking at this and thinking “Psh, we’d never have the time for this.”

But then I think about all the $$$$ that stations spend on conferences and training. This is basically the same thing. Stations talking to each other is always good. We’re not just starting an email thread. We’re actually stepping into each others’ shoes for an extended period of time. (Or cowboy boots, as I sincerely hope is the case for Steve.)

Imagine if energy reporters in North Dakota and West Texas switched jobs and connected the dots. Imagine if a South Texas border reporter visited a political rally in the Midwest surrounded by “Build The Wall!” chants. Imagine the productive conversations we can have in newsrooms across the country.

Yes, I could craft a pitch break around that.

This post was compiled by Tom Michael, g.m. of Marfa Public Radio.