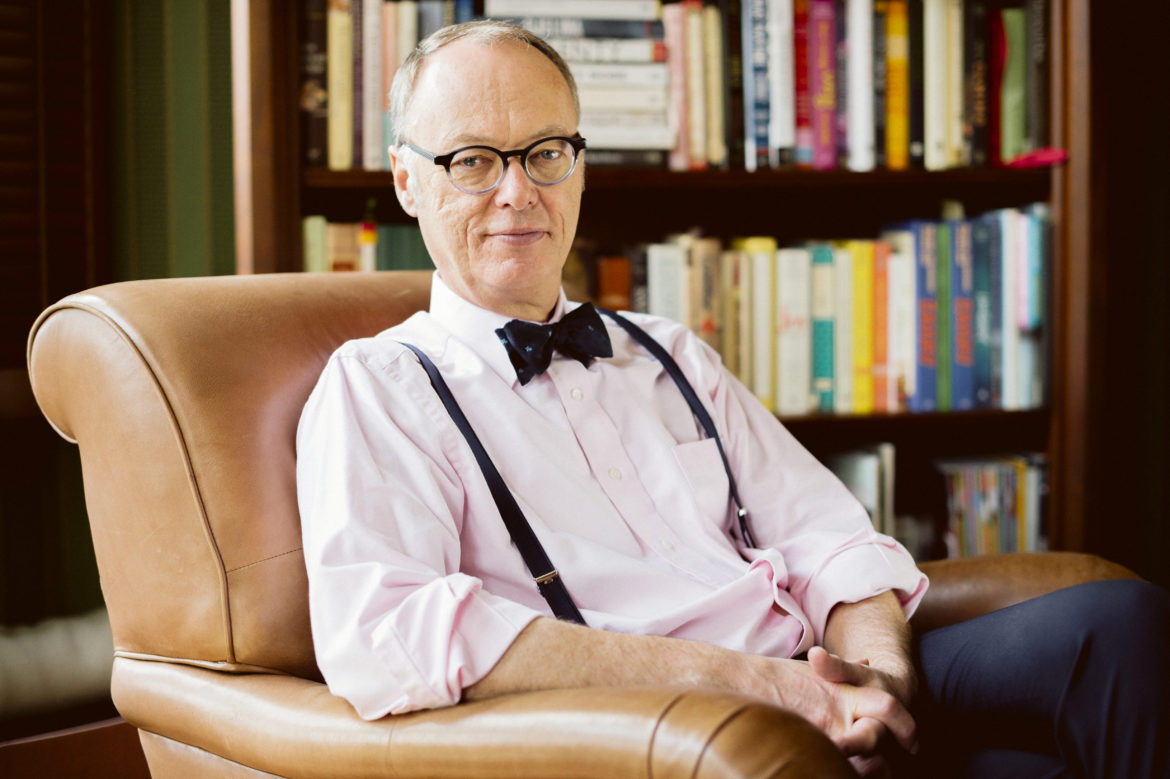 ATK’s lawsuit accuses former CEO Kimball of stealing confidential information and convincing the public “that his new venture is a revamped and enhanced version of America’s Test Kitchen.” ATK seeks damages as well as an injunction to prevent Kimball and his new company, CPK Media, from using “information, assets and opportunities” that ATK claims were stolen. Several of Kimball’s staffers who previously worked at ATK are also named in the complaint.

Kimball answered Dec. 1 with a countersuit denying the accusations and seeking damages. In addition, Kimball contends that ATK is defaming him with the charges, particularly through its website whywearesuingchristopherkimball.com, which invites visitors to “read how Chris Kimball plotted his exit from America’s Test Kitchen.” The site presents ATK’s side of the dispute and links to press coverage, documents and emails from Kimball cited in the complaint.

“ATK has exploited this litigation, using it as an excuse for its nationwide media campaign to defame Kimball by improperly imputing criminal conduct to him and otherwise impugning his character and integrity,” Kimball’s countersuit said. Each side is seeking a jury trial.

Kimball left ATK in November 2015 following a contract dispute. The program, which experiments with recipes, cookware and ingredients in a large test kitchen, named new co-hosts in March. ATK also produces cookbooks, newsletters, magazines and digital content from its headquarters in the Boston suburb of Brookline.

Kimball announced his new business venture, Milk Street, in June. The Boston-based Milk Street will offer a public TV show from a test kitchen as well as magazines, a newsletter, cookbooks and digital content.

Kimball appeared onstage at APT Fall Marketplace last month. “For 35 years I’ve been cooking food mostly of Northern Europe,” he told the crowd. “There are a lot of great recipes there. But that region had 13 spices instead of 88 in the Ottoman Empire. French recipes call for a sprig of thyme; go to Ukraine, and they use handfuls.”

“We want to travel the world, to be inspired by how other people cook, learn from them and bring those techniques back to our kitchen and try to adapt them to the home,” Kimball said. “Easier food with big, bold flavors.” 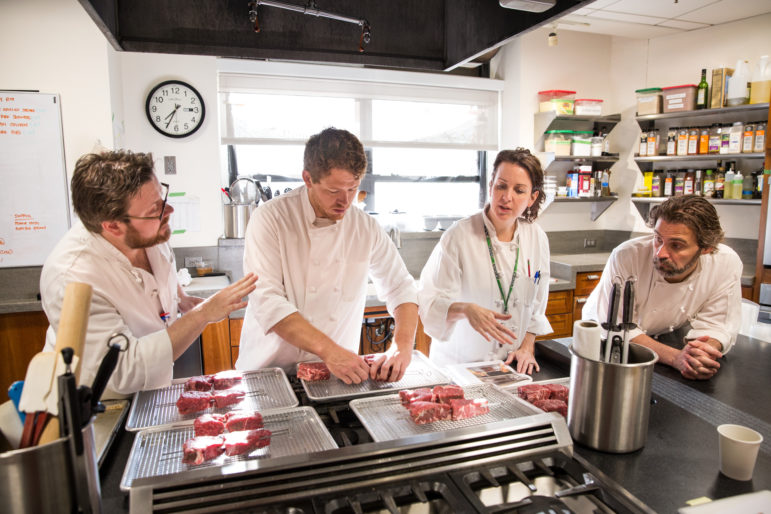 Several programmers at the meeting were pleased about the chance to carry both ATK and Milk Street. “For my schedule, it’s another great cooking show,” said Susie Hernandez, program director at KQED in San Francisco. “Our market loves those.”

“Viewers get twice as much of what they want,” said Steve Graziano of programming service P3 Public Media in Lincoln, Neb. He’s heard of several stations scheduling the two programs in a block.

ATK’s lawsuit seeks not only monetary damages but a permanent injunction. If one were granted, it wouldn’t stop Kimball from producing a show, according to media attorney John Crigler.

“The injunction isn’t framed in terms of program distribution but in terms of preventing misappropriation or unfair use of ATK assets,” said Crigler, whose firm, Garvey Schubert Barer, is not involved in either case. “If granted, such an injunction would presumably apply to past programs but leave open the possibility that new, non-infringing programs could be designed.”

Pubcasting caught in the middle

ATK and Kimball still have a business relationship; Kimball holds an 8.59 percent partnership interest in his former employer.

Kimball “made a handsome living as the public face and voice” of ATK since being hired by founder Eliot Wadsworth in 1990, according to ATK’s complaint. Kimball has since received more than $30 million in partnership distribution income, the complaint said. His salary and bonuses in 2015 totaled $1,081,231.

Kimball’s complaint suggests that ATK’s new management could endanger that financial success. The filing noted that since CEO David Nussbaum was hired in May 2015, profits fell from $22 million to $18 million and income distribution to partners plunged from $20 million to “only around $12 million.”

Kimball said in the document that under Nussbaum’s leadership, ATK’s profits “have significantly declined in 2016 and ATK intends to distribute significantly less this year to its partners.”

The sides also disagree over business relationships within public broadcasting.

WGBH in Boston was the presenting station for both ATK and its companion TV show, Cook’s Country. Kimball appears as host in repeat episodes of both.

ATK and Kimball still have a business relationship; Kimball holds an 8.59 percent partnership interest in his former employer.

ATK’s suit said Kimball “convinced” WGBH to present Milk Street, “knowing that WGBH could not effectively present both competing shows.” So ATK “was forced to change its presenting station” for 2017 to WETA. A spokesperson for WGBH declined comment.

As Kimball left ATK, he offered to produce ATK Radio through his new company, CPK Media, and assured ATK that his upcoming show would not compete. But by April 2016, according to ATK’s lawsuit, Kimball gave ATK notice that his company would cease production of ATK Radio Oct. 15. Milk Street Radio premiered Oct. 22.

Distributor PRX then opted to drop America’s Test Kitchen Radio, which it had distributed since its premiere in 2012, and instead carry Kimball’s new Milk Street Radio.

ATK’s lawsuit said PRX told ATK that “it would not market both shows.”

Kimball’s lawsuit presents a different scenario, citing a letter to PRX in which ATK  demanded that the radio distributor “not simultaneously promote and distribute ATK Radio and Milk Street Radio.” If PRX distributed both shows, the ATK letter stated, ATK “would hold PRX responsible for any resulting damage” such as station carriage falloff or inability to meet sponsorship obligations.

ATK will cease production of ATK Radio after this season. It announced in October that it would instead focus on expanding a collaboration with the public radio food show The Splendid Table in January 2017.

That collaboration “is the best way for America’s Test Kitchen to serve public radio audiences across the country, partnering with the No. 1 show in this space,” ATK spokesperson Deborah Fagone told Current in an email. She noted that Splendid Table has more than three times as many listeners as ATK Radio did.

ATK’s lawsuit also names Kimball’s producer Melissa Baldino, whom he married in 2013, as well as publicist Deborah Broide, both for “assisting and encouraging” Kimball’s actions. Each have denied wrongdoing through separate filings.

ATK’s complaint offers as evidence many emails that circulated among the three. At one point, after Broide emailed a media list to Kimball for his use for the new company, he replied: “Hopefully nothing will happen to you — seems like an episode of Mission Impossible!”

Correction: An earlier version of this post referred to Kimball’s new venture as Milk Street Kitchen, which was its initial name. It has since changed to Christopher Kimball’s Milk Street.