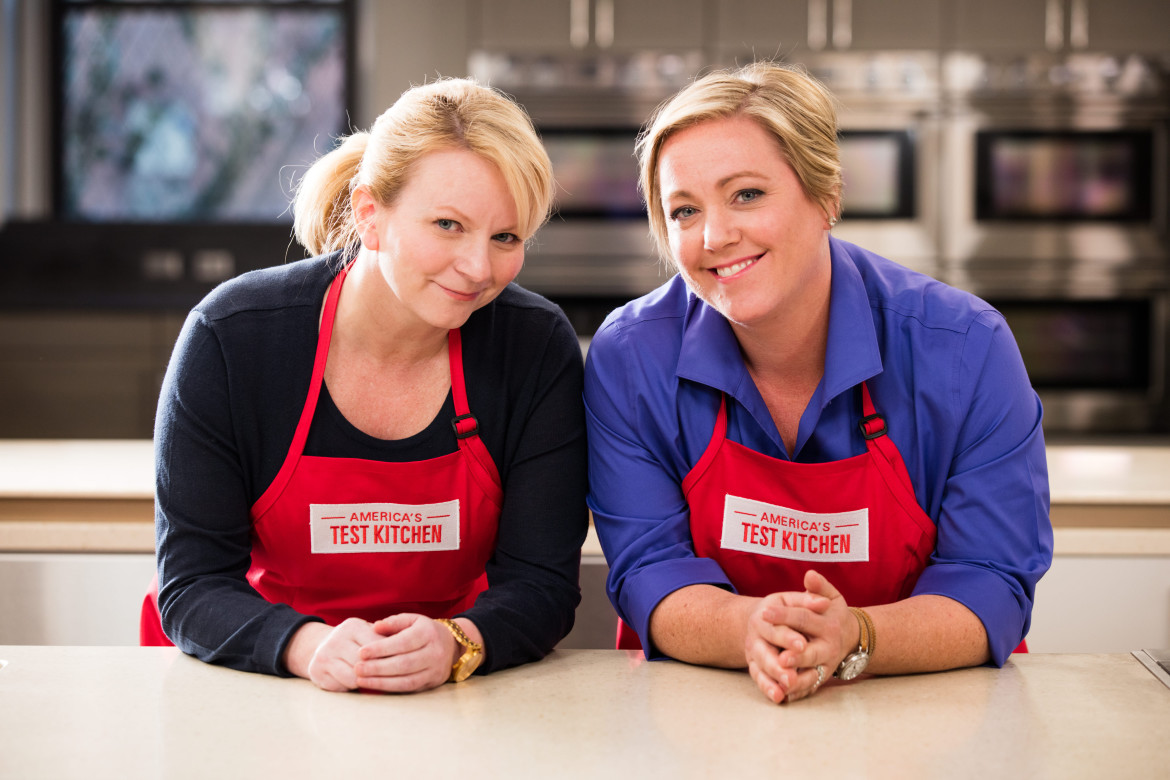 Focus groups of America’s Test Kitchen viewers in three cities made clear what they wanted to see: Two hosts having fun.

“We’ve been good friends a long, long time, so it’s not hard for us to get on a roll and start joking around,” Davison said in an interview. “Viewers for the screen tests loved it when we were on together.”

Focus group participants “felt like we were having fun together, and we were, and that we looked like we loved what we do — and we do!,” Lancaster said. “We both have our own style on camera, and will take different approaches to presenting the show.”

“Their new role leverages their incredibly rich knowledge about home cooking,” said ATK CEO David Nussbaum in the announcement, “and we hope deepens our audience’s attachment to these respected personalities.”

The two succeed Christopher Kimball, longtime face of the franchise, who departed in November over a contract dispute.

Davison and Lancaster are both original cast members of the show, which begins filming its 17th season in May. Davison is executive food editor for the company’s cookbook division and has worked at ATK since 1999. She met her husband, Ian, in the test kitchen 16 years ago. Lancaster, who arrived in 1998, is executive food editor for new media, television and radio, and also the lead instructor for the online cooking school.

“I think Chris taught us everything we know,” Davison said. “He was one of a kind and terrific at what he did.”

“No one rocks a bow tie like Chris,” Lancaster said.

“We’ve both been on the show since the very early episodes,” said Davison. “And now we have an updated look at what viewers like thanks to the focus groups.”

In December, ATK fans in Chicago, Boston and New York City watched screen tests of different concepts, including the show with a single host and with co-hosts. They were also quizzed on the program’s format of testing two recipes and discussing the science behind the food.

“They didn’t want that structure to change,” Davison said. But “what was interesting,” she noted, “was they wanted us to have more fun. We’re a pretty buttoned-down show; we can be goofy, but only sometimes. They wanted us to look like we were enjoying ourselves. Which we are! Just more so.”

Another idea for the update came from Mary Mullaney, who was hired as executive producer for television and video last month. She has developed projects for more than 20 networks, including A&E, HGTV, TLC and ABC.

Mullaney noted that most television programs have stylists. “So we thought, now with new hosts, it’s a good time to take a look at how everyone looks,” Davison said. Even the signature red aprons are “more tailored,” she said.

That’s a new experience. “That’s never been part of the equation before,” Davison said. “Stylists know color palettes, what looks good on camera, even to make my heels just a bit taller — things we never thought about before.”

Even with the updates, Lancaster said, “we will always continue to present an informative, in-depth and educational approach to our show.”

Episodes with Kimball as host continue to run through this year. New episodes with Davison and Lancaster co-hosting will start airing in January 2017.