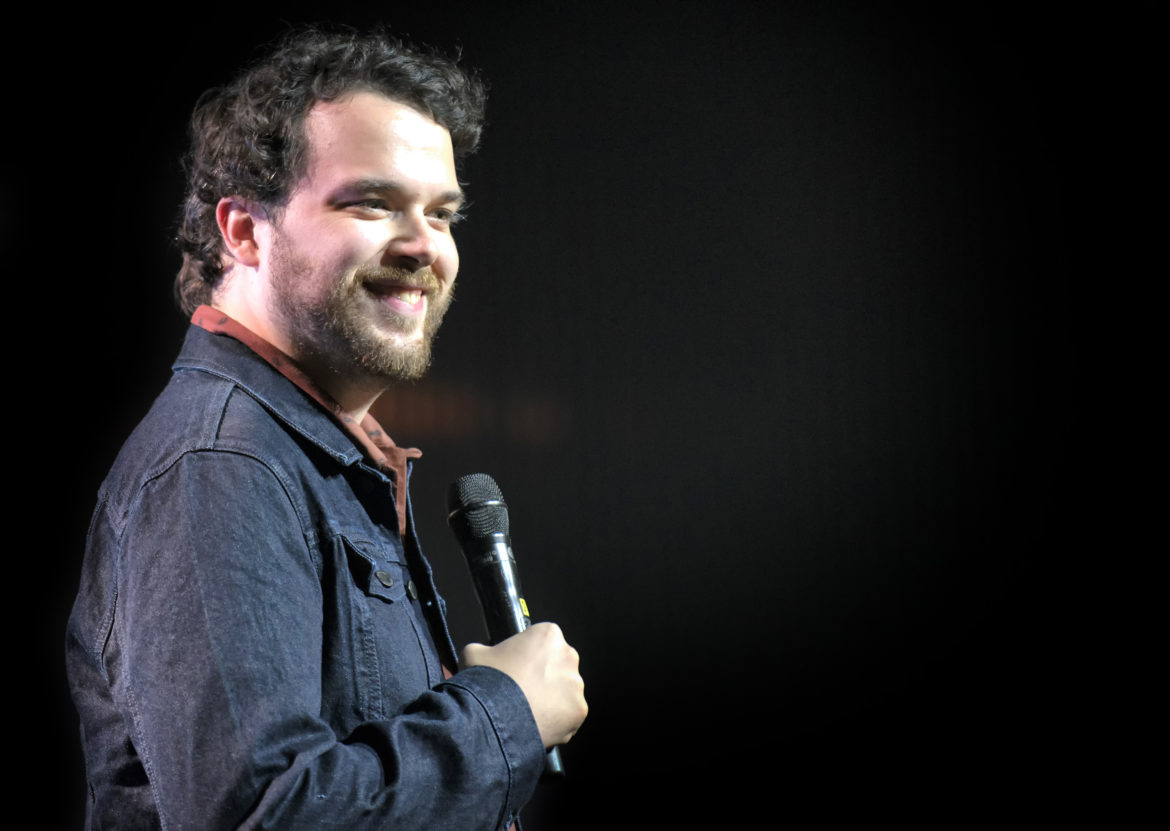 q, CBC Radio’s iconic arts and culture show with a substantial U.S. following, hopes to get its groove back as it unspools a new host and snappier format on Oct. 24.

Tom Power, 29, a prominent folk musician and radio personality credited for boosting ratings as host of CBC Radio 2 Morning, will take the reins of the cross-border property. q has been an arts and entertainment staple in Canada since it launched in 2007, but has struggled to regain its footing since the 2014 ouster of founding host Jian Ghomeshi. Through Public Radio International distribution, the series airs on 122 stations throughout the U.S., typically from 10–11 p.m. weeknights.

“I’m crazy nervous,” said Power, “but I never felt more prepared to do anything, ever.”

The CBC — and PRI — believe Power’s cheeky humor, soft-spoken charm, curiosity and especially his mastery of interviewing will stem q’s decline and move it forward.

“We are really happy about Tom Power,” said Kathy Merritt, PRI’s v.p. of content strategy and development. “He has a lot of radio experience and can come in and really lead q in a way that is positive, and move the show into a new place.”

q’s woes began two years ago, when its high-profile creator and host Ghomeshi was fired amid allegations of sexual assault and harassment. The show continued through a wave of negative publicity with substitute hosts and, eventually, an on-air audition process for a successor. After six months, CBC landed on Shad (Shadrach Kabango), an engaging and successful rap artist, who signed on in April 2015. But Shad lacked broadcast experience, and the audience noticed. Listeners called his intros flat, his interviews awkward.

During Shad’s first season in Canada, q’s ratings dipped 14 percent. Among PRI-affiliated U.S. stations, the show’s carriage has dropped by 39 percent from its peak in October 2014.

After 16 months with Shad as host, CBC took him off the air in August. It announced Power would host a revamped show; Canadian comic and broadcaster Candy Palmater took over as host in the interim.

For the past two months, Power has been holed up in the studio with new executive producer Jennifer Moroz and the q team, hashing out the concepts and contours of what he says will be a faster-paced q with shorter segments, broader appeal and more live music. Moroz said they’re “working to come up with a new sound for the show’s open.”

The old q isn’t being scrapped, just overhauled. “Audience research indicated change was necessary, but that there was a strong base from which to grow, in keeping q the brand,” said Susan Marjetti, the CBC’s executive director of radio and audio.

With tweaks to the format, the show will be less talky and re-emphasize music, which a majority of listeners polled said was the one thing they wanted more of, Marjetti said.

q’s oversight has moved from CBC Radio’s Talk department to Music, which is ramping up investment in live recording and will work closely with the show.

Power described q as an important touchstone for him as a young man. He grew up in St. John’s, Newfoundland, an island off the East Coast of Canada, and studied at Memorial University of Newfoundland. “There wasn’t much opportunity to hear about arts and entertainment. Listening to q could turn you on to things you might not have known about: how the country is changing, the incredible acts that are coming out of it. That’s what I’m interested in preserving. That you can listen to it anywhere in the country and feel connected.”

“I think a lot about Bob Dylan and his pants.”

Beyond asking him “to cut my hair and change my name,” he joked, the CBC gave him free reign to develop the new q.

Moroz said q is dropping its amorphous “culture” moniker as too general. “There are so many kinds of culture,” she said. “Like bacterial culture,” observed Power.

Interviews will be shorter. Power says his approach to them is to demystify celebrities and “talk to them as humans.”

“I think a lot about Bob Dylan and his pants,” he said. “I went to see Bob Dylan one time … and he was wearing sweatpants. Everyone is a person.” That realization guides his interviews.

Power never got to ask Bob Dylan about performing in sweatpants, but his strengths as an interviewer are evident in many conversations as guest-host. His subjects have been as diverse as comedian Chris Rock, actress Brooke Shields, singer-songwriter Ryan Adams, cartoonist Lynda Barry and UFC fighter Rhonda Rousey.

Power began his career programming folk music on college radio then became a news reporter and reader at a VOCM, a regional station in St. John’s. He moved to the CBC in 2008 as the host of folk music show Deep Roots. “Both of my listeners are big fans,” he joked. At 21, he became the youngest host to helm a national CBC radio program since Peter Jennings.

Power was named host of Radio 2 Morning in 2011. The show’s audience has grown by 141 percent since he started, reaching 700,000 Canadians a week, Marjetti said.

Like his predecessors on q, Power is a musical performer. He fronts the Dardanelles, a nationally acclaimed band that plays traditional Newfoundland music.

Power “has folk roots and East Coast perspective,” said Brian Fauteux, assistant professor of popular music and media studies at the University of Alberta. “A lot of listeners will appreciate that.”

“Much of what comes through [the CBC] is filtered through Toronto,” Fauteau said. “Someone who comes from one of the other regions is a good thing.”

Marjetti, who also grew up in Newfoundland, described its people as having a sassy, down-to-earth sense of humor that seems to have broad appeal. “We have several comedy shows that were born on the East Coast of Canada,” she said.

PRI’s Merritt expressed confidence that U.S. listeners will feel the draw as well. The CBC is “going to come out of the gate with a really strong program,” she said. PRI has just inked a new three-year distribution agreement with the broadcaster.

“We trust their editorial judgment,” Merritt said. “They know the radio business and the talent business.”

Acknowledging q’s detour with Shad as host, she said that decision “in so many ways, seemed the right choice at the time.”

“Everyone agreed he had great potential … but he didn’t achieve a kind of comfort in the host chair that you’d want to see,” Merritt said. “He never really found his groove as an interviewer. The CBC did what they had to do and made a difficult decision.”

The number of U.S. stations broadcasting q has declined to 122 stations, down from 197 at its high point under Ghomeshi, according to PRI.

“They were riding this big Jian personality wave. He was doing great, and then it was nothing but bad publicity and they didn’t have a succession plan in place,” said Hawk Mendenhall, director of content at KUT in Austin, Texas. He cancelled the show.

Lynn Clenendin, v.p. of programing for Oregon Public Broadcasting, yanked q off the system’s 16 stations — a major blow — shortly after Shad started. But the decision had more to do with the dynamics of OPB’s news-hungry audience than Shad as host.

“We were present with the news all day, except that one hour we took to stray into the arts, and it just didn’t seem to be working. … I wanted to support it, but it was too expensive for the [size of the] audience we had.”

Back when Ghomeshi was host, Clenendin asked about taking q for one night a week instead of five, but the proposal was nixed. She’s still interested in that option.

WUNC in Chapel Hill, N.C., stuck with Shad-hosted q. P.D. David Brower had been disappointed by the CBC’s decision to replace him. “He wasn’t a natural at the beginning, but I think he was getting better every week,” Brower said of Shad. “It’s a real shame that we are losing a person of color as a host of a weekday show. We have such trouble bringing diversity to our weekday programming.”

The CBC retained Shad and plans to showcase his talents in a different way, but details are still being worked out, Marjetti said.

As Power prepares to unveil the new q, he strives primarily to serve the Canadian broadcast public, but is convinced the show will attract a U.S. audience as well.

“We are building a great show that we think will have universal appeal,” he said. American listeners may have a hard time placing his accent, he said, but they won’t feel like the show isn’t for them, too.