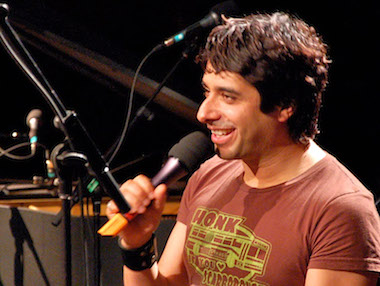 The Canadian Broadcasting Corp. and Public Radio International are assuring U.S. public radio stations that the CBC’s Q will continue after the shocking dismissal of the show’s founding host, who is embroiled in a burgeoning sex scandal.

Q was branded as Q With Jian Ghomeshi until the CBC fired the on-air talent who took the daily series to wide popularity in Canada. Allegations that Ghomeshi had violently abused and harassed women he dated or worked with have since swirled through Canadian media. The CBC dropped his name from the show’s title, and Q continues to air with substitute hosts.

With Ghomeshi behind the mic, Q built pubcasting audiences in Canada and the U.S. (Photo: Penmachine/WikiMedia Commons)

Public Radio International distributes the arts, music and culture show to 172 public radio stations in the U.S. “No one has said they’re going to drop the show,” said Melinda Ward, chief content officer. “People are curious and concerned about what’s going to happen, but everyone is in a wait-and-see mode at this point.” The CBC intends to choose a new host for the broadcast, and PRI will continue distributing it, although it is contacting stations to address questions and concerns.

Ghomeshi mounted an aggressive rebuttal and a $55 million (Canadian) lawsuit against the CBC seeking reinstatement to his job, but last week the show went on without him.

For the first broadcast following Ghomeshi’s forced departure, CBC’s Brent Bambury opened with a deep sigh, then said Q is more than just its host and will continue in the same vein.

“Today, we’re doing what we do as producers, as broadcasters and as people — we move forward,” Bambury said on the Oct. 27 edition. “I hope you’ll follow us.” Bambury also hosts the weekly CBC series Day 6, likewise distributed in the U.S. by PRI.

Chicago’s WBEZ was the first station in the U.S. to pick up Q. The show attracts a solid audience, according to Heidi Goldfein, p.d., who has no plans to drop the program.  “Like everyone else, we’re waiting to see who they name as the new host,” she said.

The scandal began to unfold Oct. 24 when the CBC placed Ghomeshi on indefinite leave amid what later emerged as allegations that he had physically and non-consensually assaulted multiple women.

In a 1,500-word post on Facebook Oct. 26, Ghomeshi said his former girlfriend had taken her allegations of abuse to a freelance reporter who was working on a story to publicize her claims. But by then, several women were already talking to Canadian press. Nine women, all but two anonymous, have come forward.

According to documents that accompanied his lawsuit, Ghomeshi had begun preparing for the revelations months earlier. He hired a prominent law firm, Dentons Canada LLP, and the public relations firm Navigator, which specializes in crisis response and “reputation recovery.” He also warned his CBC bosses of the brewing firestorm.

When he learned that the allegations against him were likely to be made public, Ghomeshi shared information about the relationship with CBC officials, according to his Facebook post. CBC executives agreed “information provided showed that there was consent,” he wrote. “They said they’re not concerned about the legal side.”

“But then they said that this type of sexual behavior was unbecoming of a prominent host on the CBC,” he continued. “They said that I was being dismissed for ‘the risk of the perception that may come from a story that could come out.’”

“To recap,” he added, “I am being fired in my prime from the show I love and built and threw myself into for years because of what I do in my private life.” Ghomeshi announced his intention to sue the CBC for monetary damages and reinstatement.

The woman whom Ghomeshi had been dating has not publicly responded to his description of their relationship.

In a media statement, the CBC said it was “saddened to announce its relationship with Jian Ghomeshi has come to an end. This decision was not made without serious deliberation and careful consideration. Jian has made an immense contribution to the CBC and we wish him well.” A spokesperson declined further comment to media.

The CBC’s code of conduct for employees stipulates that employees should act “at all times with integrity and in a manner that will bear the closest public scrutiny, an obligation that may not be fully satisfied by simply acting within the law.”

As allegations continued to mount, Navigator dropped Ghomeshi as a public relations client Thursday, as did his publicity firm Rock-it Promotions. On the same day, the CBC said it would retain an independent third-party company to investigate the allegations against Ghomeshi. The CBC reported Saturday that Toronto police are investigating complaints filed by three women.

Ghomeshi’s dismissal prompted a flood of coverage among Canadian media. Initially, the Toronto Star reported anonymous allegations by three women, who said Ghomeshi had violently assaulted them without consent, choking them and hitting them with a closed fist.

The paper also reported speaking with a fourth woman, a CBC employee who claimed Ghomeshi had harassed her at work. In another news account, the woman said she had reported the incident to her union representative but, after discussing her options for pursuing a grievance, declined to take it further.

The Star later reported the account of another alleged victim who went on the record. Actress Lucy DeCoutere, from the Canadian TV show Trailer Park Boys, said that in 2003 she and Ghomeshi were kissing when he slapped her head and choked her to near-unconsciousness without asking for permission. In the same Oct. 29 article, three other women, including another former CBC employee, also recounted physical abuse by Ghomeshi.

Though the bad press has not prompted U.S. stations to drop Q, at least one is reconsidering picking it up. Iowa Public Radio Executive Director Myrna Johnson said her station had been evaluating the show for its schedule but now is having second thoughts.

“We had been looking at the show and thought it sounded pretty cool,” she said. “But with all of this, I’m not so sure.”

The host claimed that he had been penalized for warning the CBC about the allegations of activities that he described as consensual. CBC officials wrongfully used that information against him, he alleged, when he was put on leave and subsequently fired.

Under Canadian law, union employees who are covered by a collective bargaining agreement cannot sue employers over dismissal issues. Precedent cases define the employment relationship as between the union member and the union, not the employer.

Legal experts speaking to the Canadian press downplayed the likelihood of Ghomeshi’s case prevailing in court. In a video interview with the Globe and Mail, Howard Levitt, a senior partner at employment and labor law firm Levitt & Grosman LLP, said the lawsuit was groundless due to the Canadian labor laws. The lawsuit and the CA$55 million in damages being sought were more of a strategic public relations move, he said.

“He’s not entitled to $1,” Levitt said. “It will be thrown out in five seconds.”