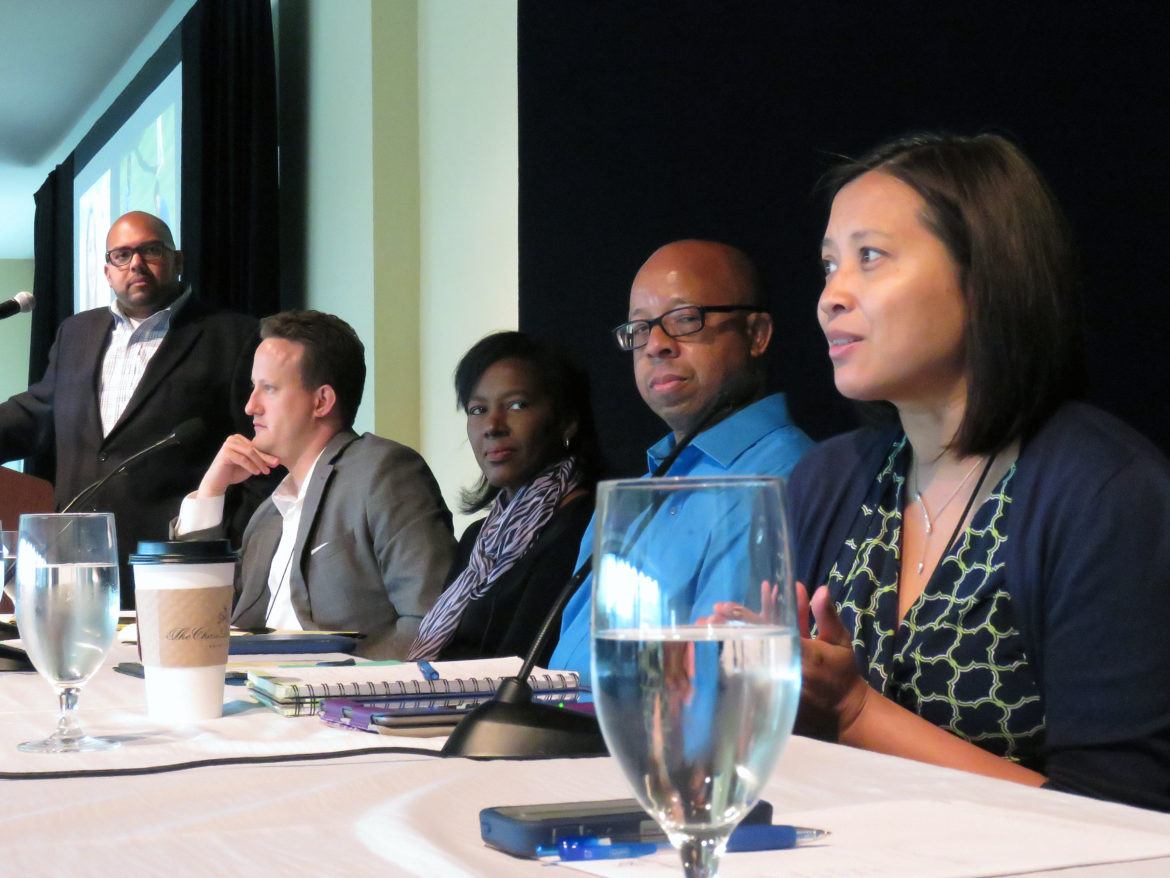 If the lack of diversity in media was ever merely a matter of inside baseball, that time has passed.

That was the message delivered by Andrew Ramsammy, director of content projects and initiatives at Public Radio International, as he took the podium Saturday at the Public Radio News Directors Inc. conference in St. Louis. He began his remarks by simply listing hashtags.

“#OscarsSoWhite, #TonysSoDiverse, #StarringJohnCho, #ILookLikeAnEngineer, #WeNeedDiverseBooks,” Ramsammy recited. He read other tags that, like those, have been rallying cries online over the last year for advocates of diversity in media.

He eventually pivoted to examples that hit closer to home for his audience of public radio journalists, managers and executives: “#PubRadioVoice, #VocalFry, #IAmLakshmiSingh, #SoundsLikeAmerica.”

“Clearly the issue of diversity is no longer an inside thing,” Ramsammy said. “As we’ve seen, the public has keenly become aware about diversity, both inside and outside of media. And they know when it’s lacking and when it thrives.”

Himself a broadcaster of color, Ramsammy has been outspoken about public media’s disproportionately white audience and workforce, in part through his status as a 2016 fellow with the WGBH-led Next Generation Leadership program. The program seeks to develop a diverse bench of programming executives for public media.

(Ramsammy later announced at the event that he is leaving PRI due to the expiration of grants supporting his work, and he is forming a new consultancy, UnitedPublic Strategies, to advance diversity in public media.)

At the PRNDI panel discussion on diversity where he served as moderator, Ramsammy reminded the audience that diversity is not a new imperative for public media but one that Congress identified in the 1967 Public Broadcasting Act, which states “it is in the public interest to encourage the development of programming that involves creative risks and that addresses the needs of unserved and underserved audiences, particularly children and minorities.”

With that as his point of departure, Ramsammy led a discussion with five panelists who have all helped diversify public media workforces at various levels. Here are seven of their takeaway lessons.

1. Project the image that you want to see in your staff

“Our marketing messages all have images of people who look and sound like America,” said Doug Mitchell, founder and project director of NPR’s Next Generation Radio.

Mitchell organizes boot camps around the country designed to attract and prepare the next generation of public media journalists, with a special emphasis on diversity. He must find recruits for each event he stages, and he often finds them through social media, where he said he works to project an image that will attract the people he’s most looking for.

“Every tweet has someone who looks different from the other, and that means we attract people who are interested in what we do because they look at [those images] and they say, ‘They want people who look like me,’” Mitchell said.

Others looking to attract diverse candidates must be similarly intentional at every step of the hiring process, he said.

Ramsammy said he often hears from hiring managers that they can’t find qualified candidates of color. “Can we call bullshit on that?” he asked.

“Yes,” Mitchell replied, with the audience applauding (at Ramsammy’s urging).

Karen Henderson, Morning Edition host at WRKF in Baton Rouge, La., pointed out that she is the only person of color on the air at her station, which serves a majority-minority city. “If we don’t have [candidates of color], let’s go get them. Let’s raise them.”

“We’ve got to do better than just put ads in Current,” Eby said he realized recently, “but really deliberately seek out people that had been either recommended by others or were somewhere within our network.”

Prior to the August 2014 police shooting of Michael Brown — which led to the St. Louis suburb of Ferguson where the incident took place becoming a national metonym for the increasingly antagonistic relationship between police and people of color — St. Louis Public Radio’s newsroom was only seven percent people of color, Eby said.

“Today we’re at 27 percent,” he said, in large measure due to his staff making an extra effort to seek out and individually recruit diverse candidates.

Now, “we have an Asian-American, we have [a] Hispanic, and we have two African-American women in our newsroom,” Simpson said. While the openings for those current staff members became available through “natural attrition,” he said, ideastream was deliberate about seeking diverse candidates to fill those positions.

3. Prioritize diversity within the newsroom in particular

When news managers make a new push for diverse hiring, Simpson said, they might encounter a human resource officer who says, “Well, if you look at our organizational chart across the entire organization, we’re actually doing pretty good, in terms of diversity.”

That’s good, but not good enough, Simpson said. The news and content departments in particular must have diverse staffs in order to create content that will serve diverse people.

“What’s the public-facing aspect of your organization? It’s the news department, in many, many situations,” he said.

St. Louis Public Radio’s aggressive yet sensitive coverage of the Michael Brown shooting and its aftermath was itself a recruiting tool for the station, Eby said.

“I think the fact that we were very focused on content that addressed these issues attracted people [of color] to want to come to St. Louis and work for us,” he said.

Hidalgo’s work has focused on the victims of violence in the St. Louis region, who are overwhelmingly people of color. The result of her efforts has been a dramatic uptick in the number of black and brown faces appearing on her station’s online platforms, Eby said.

“How many of you are actually paying your interns?” Ramsammy asked the audience. Only a few hands went up.

“I think we need to pay our interns,” he said, alluding to an often-made argument that unpaid internships effectively exclude anyone not privileged enough to work for free from taking a crucial first step on the career ladder.

“There are many, many institutions and donors that will support that effort,” he said.

Mitchell agreed that pipelines for diverse media talent are attractive to funders, pointing to the Next Generation Radio boot camp he has done for several years running at the University of Nevada, Reno. The program is supported by an individual donor who recently decided to endow the program in perpetuity.

“If you go to somebody and put their name on it, like a building, they’ll pay for it,” Mitchell said.

Kris Vera-Phillips, senior news producer at KPBS in San Diego, said her station is in the planning stages of establishing a diversity council of staff members — a move that staff demanded in contract negotiations since voting to be represented by the SAG-AFTRA union.

The council is being drawn from the newsroom and other departments across the station, she said, and about a third of the members are people who have only started working there in the last year (which includes her).

“We do have a shared vision, in terms of not just hiring diverse candidates, but also increasing diversity in our programming and trying to get away from being the station that is the Downton Abbey station,” Vera-Phillips said.

St. Louis Public Radio has formed a diversity council as well in recent months. To dramatically increase the station’s newsroom diversity, as it has done in recent years, “it was like, ‘Oh, high five, we did this,’” Eby said, but now the station has to examine its workplace culture to make sure that it will retain its new journalists of color.

Listen to the complete audio of the panel: