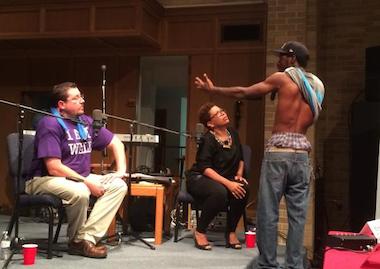 The aftermath of the shooting of Michael Brown in Ferguson, Mo., proved to be a critical test for the newsroom of St. Louis Public Radio, whose expansion through a merger with a local news nonprofit provided a larger staff for covering the chaotic fallout.

St. Louis Public Radio sent all of its 30-plus journalists to cover the protests and skirmishes in Ferguson, taking advantage of its expanded resources to deliver both breaking news and more nuanced pieces that took a broader look at the issues involved. It augmented on-the-ground coverage with multimedia components, including video and social media updates, while using its local programs to engage its audience in discussions about the events.

A participant in a public forum about racial tensions in Ferguson, Mo., shows Ferguson Mayor James Knowles III a wound that he said came from a rubber bullet, fired at him during rioting. The forum was hosted by NPR’s Michel Martin, at center. (Photo: Jason Rosenbaum, St. Louis Public Radio)

The protests and clashes between police and the public occurred daily and nightly for nearly two weeks, tapering off only as Brown’s funeral neared. “It has been extremely challenging for the staff,” said Tim Eby, g.m. of St. Louis Public Radio. “Pretty much everyone in the newsroom had been working for more than 10 days straight. And because much of the activity happened at night, we’d become a 24-hour newsroom.”

Coverage also included a live blog of breaking events that monitored social media, an infographic breaking down Ferguson’s demographics, and explainer pieces, including one about the workings of grand juries.

The extensive coverage paid off, drawing above-average traffic to the station’s website during the first 10 days of coverage — 300,000 unique visitors to the site from all over the country. One on-air show was live-streamed by 2,000 people, also higher than normal.

The merged newsroom covering the events grew from the December 2013 union of St. Louis Public Radio and the St. Louis Beacon, a nonprofit news website. The merger combined the Beacon’s 18 full-time staffers with the radio station’s 36 full-time and 11 part-time workers. Rather than competing for breaking news, the journalists were able to use their enlarged ranks to cover events in Ferguson from multiple angles.

“If this had happened last year, we would have been overwhelmed by the second day,” Eby said. “Now, having the capacity to do this has been huge for us and allowed us to bring out more stories beyond what was just happening on the streets.”

One such story came from reporter Durrie Bouscaren, the station’s science reporter, who was in her first week on the job when Brown was shot. Bouscaren and reporter Stephanie Lecci pulled nighttime reporting duty on Sunday, Aug. 16, a week after Brown was killed. The pair arrived at the mile-long stretch of road where most clashes occurred to find protesters at one end and police at the other.

Bouscaren remembered that wafts of tear gas punctuated the tense atmosphere. As she and Lecci split up to look for stories, they began fearing for their safety, noticing that while they were dressed in everyday clothes, other reporters and photographers covering the scene wore bulletproof vests and riot helmets.

Then gunfire broke out among the protesters. Lecci and Bouscaren spoke with their editor by phone and decided to leave the scene. They eventually found themselves on a largely deserted street about a block away. Looking for refuge, they saw a house with its lights on and knocked on the door.

To their surprise, a woman answered the door and let them in. Irma Moore, her husband and their five children were hunkered down, watching the events a block away play out on the local news.

That night Bouscaren interviewed Moore for a story about the family and how the mayhem was affecting them. Moore described tear gas seeping through her walls and her family’s fears of having their home broken into. Such stories are central to public radio’s mission, Bouscaren said.

“I feel like sometimes that’s forgotten, but it’s really important to talk about the people who live here,” Bouscaren said. “We’re local public radio and we’re supposed to be the voice of the public, and we should be out there talking to them.”

A forum for tough questioning

“It’s been a transformational experience for us,” Freivogel said. “Going through something this intense and feeling like your co-workers have your back has been a bonding experience for everyone.”

With the worst of the clashes over, Eby and Freivogel said they plan to continue covering legal developments and to find stories about the impact of the strife on the community. To facilitate a conversation, St. Louis Public Radio brought in Michel Martin, former host of NPR’s Tell Me More, for a public discussion Aug. 28.

According to St. Louis Public Radio, nearly 200 people attended the event, held at a church in Ferguson. Panelists including Ferguson Mayor James Knowles III and former St. Louis Police Chief Dan Isom fielded questions, often critical, from the crowd. One audience member showed a wound from a rubber bullet inflicted during the rioting.

“The most important thing we’ve tried to keep in mind is that through all of this, this story is about the people of Ferguson,” Freivogel said. “This has been just the beginning of the story, really. There’s still a lot to follow up on.”