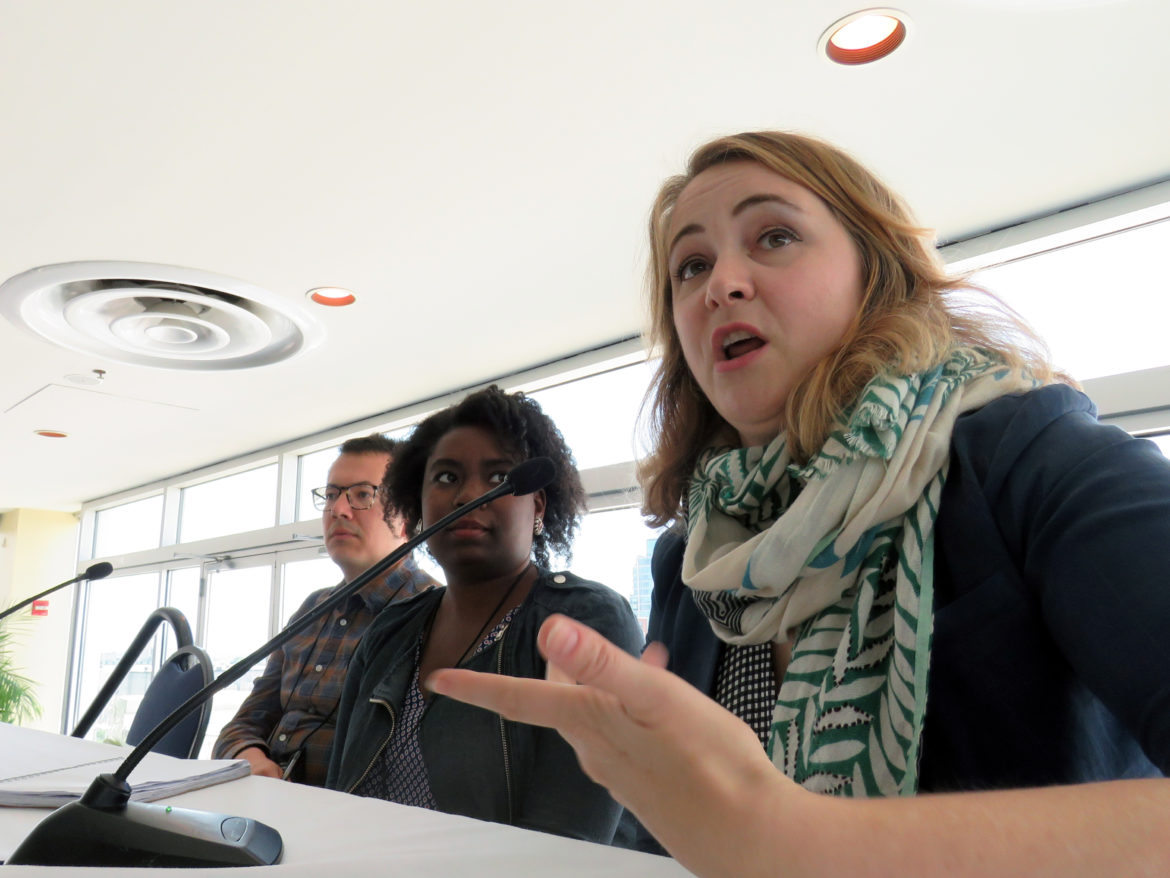 As high-quality offerings increasingly crowd the podcast market, how does a new entrant distinguish itself? Kelly McEvers, host of NPR’s latest hit podcast, Embedded, says one way of getting attention for a new show is to, well, be NPR.

“At Embedded, we had this, like, huge powerful thing behind us, which was the brand. You know, that works a lot of the time. It was called NPR,” she said.

McEvers’ frank acknowledgement of her NPR privilege — if I dare call it that — came during a panel discussion about podcasting I moderated Friday at the Public Radio News Directors Inc. conference in St. Louis.

“I was lucky in that no one came to me and was like, ‘You really need to think about building an audience.’ It was just like, ‘Go make your thing,’” said McEvers, who also co-hosts NPR’s All Things Considered and thus has limited time to think about marketing and market differentiation.

Nonetheless, three distinct themes about how to define, pursue and serve a podcast audience emerged from the discussion among McEvers and her fellow panelists.

Brand association doesn’t always work, even for those lucky enough to have it.

When KCRW and McSweeney’s first came together to create a podcast in conjunction with the latter’s literary magazine, The Believer, the idea was just to get the people who subscribed to the magazine to download the podcast, said Andrew Leland.

The resulting show, which Leland hosts and produces, debuted in 2013.

“The name The Organist came from this idea of, like, we’re an organ of the magazine,” he said. “But quickly it became clear that I would talk to people who had, for example, heard of The Organist but had never heard of The Believer magazine.”

Leland’s background was in magazine editing, and he was surprised by the profound differences in medium between print and audio, he said. Leland and his colleagues quickly stopped trying to “radio-ize” magazine content and instead embraced an association with The Believer that was a bit more abstract.

That alternative approach is distinct enough to unify The Organist across the incredibly wide range of material that the program features — essays, fiction, journalism, interviews, reported pieces and more.

In the show’s September 2015 episode, “Orson on Wonderland,” Robert Kesinger, a one-time personal assistant to Orson Welles, tells the story of the legendary auteur’s somewhat pathetic twilight years in Los Angeles. Format-wise, it’s an interview with the questions removed and sound inserted.

Leland imagines his audience as “a listener who has a kind of omnivorous approach to culture,” he said, to whom The Organist’s particular “sensibility” or “sense of voice” appeals. The show — and, by extension, its audience — is not defined by a topic or format, but by an aesthetic.

2. Start with a specific story

NPR’s Planet Money launched in 2008 to cover a specific, immediate news story of broad, intense interest: the 2008 financial crisis. The show’s creators kept walking down the road that led from that door — taking their initial audience with them — and now they have a program that can most generally be described as informal, irreverent explanatory journalism about economics.

Likewise, St. Louis Public Radio’s We Live Here debuted in February 2015 to cover issues underlying the August 2014 police shooting of Michael Brown and ensuing civil unrest in the St. Louis suburb of Ferguson. With that as a starting point, the show has since evolved to cover issues of “race, class, power and poverty” in cities nationwide, said co-host Kameel Stanley.

The broadening of We Live Here’s mandate was, in part, a natural reaction to its audience metrics; only 20 percent of the show’s listeners are in St. Louis, Stanley said. Evidently, many people from beyond the city found the podcast because they were interested in Ferguson. Now, the podcast is following those listeners home to their cities.

An episode from two weeks ago, about the national shortage of Section 8 housing, includes a story from St. Louis, one from San Francisco and one from my city of Macon, Ga. — the latter two being filed by outside contributors.

While the show has transcended its origins in covering a specific story, it remains that when a story breaks that connects with issues in We Live Here’s wheelhouse, downloads spike, Stanley said.

3. Find a new spin on a proven formula

According to its tagline, Embedded is a show in which McEvers “takes a story from the news and goes deep.” At first blush, that would seem to describe NPR journalism generally, for which depth has always been one of the main value propositions.

“We’re doing a really good job of covering the news every day on NPR and on our stations, but there’s still like this nagging thing where you’re just like, ‘Man, I just don’t understand how that works.’ That’s what we do on Embedded,” McEvers said.

More specifically, Embedded consists of relatively long-form NPR-style pieces that are reported from the field — as opposed to from the studio — and are generally reported by journalists who have spent significant time with their subjects.

The show’s June 2 episode was reported by Rebecca Hersher, who spent three months on an Above the Fray fellowship reporting on the sky-high rate of youth suicides in Greenland. As McEvers narrated in the program, Hersher “lived with the people she was reporting on. She ate with them, went to church with them, and spent long weeks inside, trapped by winter storms.”

Pieces reported via such a process are particularly suited to first-person storytelling, McEvers said, which itself is particularly suited to the more personal medium of podcasting as opposed to radio. There’s also a slight gonzo element to the journalism — McEvers intimately observed drug users preparing and injecting an opioid solution in the debut episode.

While a relatively undifferentiated public radio audience may find Embedded because it has NPR’s name on it, McEvers initially envisioned her target audience as being “some intersection of, like, the typical NPR listener and the person who watches Vice,” she said.

McEvers isn’t sure if such a person actually exists, but as the show is now 11 episodes into its run and continues to hover in the upper regions of the iTunes charts, there is certainly some group of people to whom this take on the NPR formula offers a particular appeal.

Listen to the full audio from the panel: