We Live Here: On a national scale, the spotlight on Ferguson, Mo., has dimmed following the shooting of Michael Brown last year and the ensuing protests. But St. Louis Public Radio continues to explore the issues that arose with We Live Here, a podcast that explores racial issues in the St. Louis region.

“As a newsroom, St. Louis Public Radio was very much aware that, even though the day-to-day news cycle isn’t all about #Ferguson anymore, the issue was far from settled, the story far from complete,” Shula Neuman, editor at St. Louis Public Radio, wrote in a post introducing the project. “We felt we were in a unique position to poke at the issues in a way that few other media outlets can do.”

The station conceived of the podcast as a “multi-faceted, multimedia project” and is planning accompanying events including concerts, art shows and live broadcasts.

“We didn’t want to just tell another story about the inequalities that exist in our region,” Neuman said. “We wanted to tear into the issues, break apart the theory from the reality, demonstrate how the systemic problems that plague our region play out in real people’s lives.”

The first episode will be posted Monday. New episodes of 15 to 45 minutes in length will be released every other week, Neuman said in an email. The podcasts will occasionally be used as part of St. Louis Public Radio’s show St. Louis on the Air, she said.

St. Louis Public Radio opted to produce We Live Here as a podcast to take advantage of the format’s less formal approach, Neuman said. “Because we are attempting to peel away at very tough issues — and because we want listeners to feel like they are learning along with us — we thought it made sense to let our hosts talk to listeners in a less scripted manner,” she said. 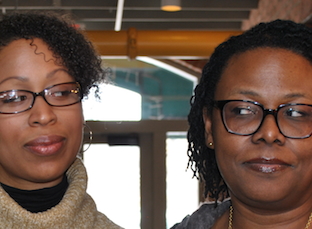 Let’s Review: Two Michigan Radio employees are spending nights and weekends developing a new podcast that they hope will eventually catch the attention of their station. Let’s Review is hosted by Jenn White, Michigan Radio’s All Things Considered host, and Kim Springer, the station’s social media producer, and focuses on race, identity and pop culture, with their first episode looking at race and movies.

The show is not yet a Michigan Radio production, but the hosts are hoping it will eventually catch on at the station. “Michigan Radio, like most stations, is interested in expanding and diversifying its audience, so we thought our interests in identity and current events might help make this happen,” Springer said in an email.

While Michigan Radio makes its on-air programming available as podcasts, the two hosts are the first to produce a podcast-only program, according to Springer. Though the station is interested in producing more podcasts, its tight budget is keeping it from staging any full-scale productions, she said.

Recommended episode: How race is used in 21st century movies . . . so far