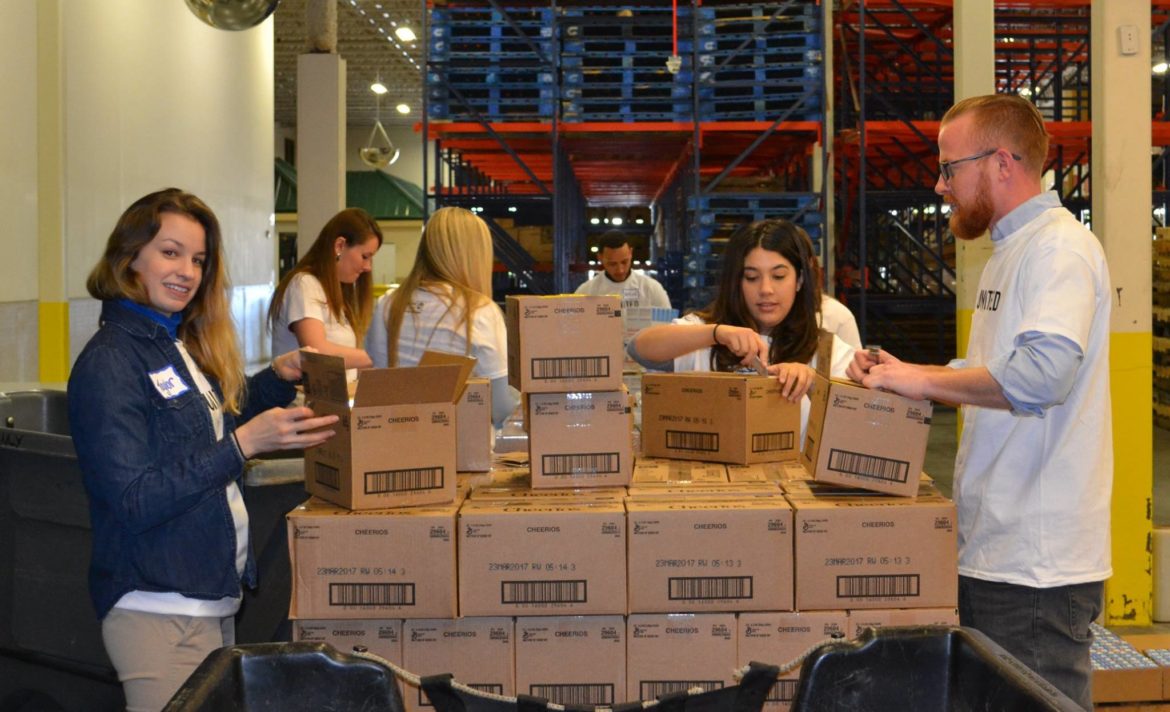 Summer tends to be a slow season for fundraising, but Rhode Island Public Radio is gearing up for a daylong campaign that will raise money for the station while supporting a local food bank.

For every dollar donated to RIPR, a local foundation will make an equal contribution up to $10,000 to the Rhode Island Community Food Bank. The arrangement allows the station to keep the funds it raises while the food bank fills its shelves.

“People just get it,” said Jed Thorpe, RIPR membership manager. “It’s an easy ask. People get that the food bank is important. It’s a really easy way for people to justify making a donation to the station. I mean, who doesn’t support the food bank?”

RIPR’s use of matching or challenge grants as donor incentives is similar to cause-based marketing, or partnerships between  for-profit companies and nonprofits that yield mutual benefits. In the case of RIPR, two nonprofits are sharing the proceeds. Experts say that the donor giving to the food bank, whether a foundation or a corporation, also benefits from sponsorship messaging and other rewards.

Food-bank partnerships have been successful for many public stations, but experts say they can have mixed results. That could be due to how they’re implemented or inconsistencies in how the paired donations are promoted on-air. Others point to the importance of aligning the brand with the cause.

Everyone’s a winner in Rhode Island

RIPR’s fifth food-bank fundraiser is slated for July 26. That morning, station members will receive an email alerting them to the drive. Prerecorded spots will air throughout the day.

RIPR will begin pitching at 7 a.m. and continue until it reaches its $10,000 goal, which typically occurs sometime before 10 a.m., Thorpe said. During that time, the station’s Morning Edition host will interview food bank CEO Andrew Schiff.

“We look at it as an opportunity to educate people about the food bank and what their needs are,” Thorpe said.

For the food bank, the effort boosts donations during a typically dismal season for its own fundraising.

“We’ll typically see a big spike in donations around Thanksgiving and Christmas, we fall off a little cliff after January 1st, and we’re way down into the valley by the summer for food and funds,” Schiff said.

So Schiff reminds listeners that food insecurity is a year-round problem and tends to spike during the summer, when children are out of school and missing out on free and reduced-price breakfasts and lunches.

The food bank serves 60,000 Rhode Islanders every month, or about 6 percent of residents in a state of a million people, Schiff said.

Since the first food-bank fundraiser in 2011, some donors have told Schiff that they wait for the RIPR summer partnership to donate. While the Rhode Island Foundation matches the $10,000 donated to the station with a donation to the food bank, last year an anonymous donor offered his own match of $5,000, and the station raised more than $16,000.

The station’s partnership with non-corporate partners increases its likelihood of success, said Sarah M. Stanley, an assistant professor of marketing at the Missouri University of Science and Technology in Rolla who has written about pairing brands with social causes.

“A corporate partner is a little more risky just because that tends to increase consumer skepticism,” Stanley said. “But with [public] media partnering with nonprofits, I don’t see a big downside. I see a mutually beneficial relationship.”

Authenticity and aligning the brand with the social cause are critical to cause-related marketing efforts, said Peter Magnusson, associate professor of marketing at the Culverhouse College of Commerce at the University of Alabama in Tuscaloosa. Magnusson, who’s also written about cause marketing, said organizations should choose partnerships that are authentic to their identity and core mission. Otherwise, an effort may come across as disingenuous.

For news organizations, it can be tricky to toe the line between fundraising and news. What if RIPR had to report on shenanigans at the food bank? “We maintain our news objectivity,” Thorpe said, adding that the station pushed out carefully worded pitches and the newsroom isn’t involved with the food bank. “We really see as part of our role highlighting and lifting up other organizations in the state that are doing good work.”

In a 2012 study that surveyed 100 stations representing more than 1.4 million donors, Greater Public found that 38 percent of stations had partnered with other nonprofits during fund drives. Food banks and hunger-relief services were among the top partnership categories.

Of those stations, 45 percent said that nonprofit partnerships were important to the success of their drives.

“In theory, there’s all upside to it, and I think some stations have experienced that upside, but the results seem to be somewhat mixed on a case-by-case basis,” said Jay Clayton, individual giving advisor for Greater Public.

A number of variables can affect donations, such as the donation levels pushed by stations, how often such partnerships are implemented, and the length  of the promotion. “There’s definitely, if nothing else, an intangible good feeling that you’re helping two organizations that you care about by making a donation to your public radio station,” Clayton said.

In March, a partnership between WAMU in Washington, D.C., and the Capitol Area Food Bank raised $1.4 million and was among the station’s strongest campaigns, said Becky Chinn, a partner with LKA Fundraising and Communications and interim membership director at WAMU.

Listeners tune in because they care about the community, “and this allows them through that donation to make an even bigger impact,” Chinn said.

This year, 10,000 people donated to the campaign, and 44 percent chose to donate a meal package or to defer a thank-you gift and contribute an equivalent amount to the food bank.

The campaign also encouraged donors to become sustainers by offering sustaining supporters both a thank-you gift and a match of meal packs donated to the food bank. The gifts provided 76,895 meals, Chinn said.

This year, strategic messaging about the station and its programs and services was front and center, with discussion of the food bank accompanying it, Chinn said.

Chinn said station-nonprofit partnerships are rare in December, because every organization is out for itself at that time of year. “You’re hyper-focused on your mission and your cause and making sure that you get your piece of the year-end giving pie,” Chinn said.

A backpack with some of the goods children take home over the weekend through the feeding program.

But WFDD in Winston-Salem, N.C., has had success partnering with its local food bank in an end-of-year fundraiser held since 2008. A donation of any amount to WFDD yields a gift of a backpack filled with food to a child in need, which the food bank says costs $5. Funds for the backpacks are provided by the station’s corporate partner.

The campaign kicks off just before Thanksgiving with pre-produced promotional spots and special spots for Giving Tuesday, the day of service and generosity observed on the Tuesday after Thanksgiving. The spots increase in frequency right up until WFDD airs two days of pitching during the second week of December. The campaign garners some major gifts of $1,000 or more, said Molly Davis, assistant g.m.

But the campaign breaks some typical fundraising practices by not setting a minimum pledge or announcing dollar goals. “We want this to be a campaign where absolutely every person feels like they can participate,” Davis said.

Davis said the initiative works across the station’s wide listening area of 32 counties in North Carolina and Virginia because its nonprofit partner, Second Harvest Food Bank of Northwest NC, shares a similarly large service area. Ralph Lauren, which has a distribution center in Greensboro, N.C., became the corporate partner in 2010.

Despite the shared benefits for participating nonprofits, corporations are often the biggest winners because they can deduct their donations from taxes while receiving free advertising, said Kathleen S. Kelly, a professor in the department of public relations in the College of Journalism and Communications at the University of Florida who has studied philanthropy.

A 15-second underwriting spot on WFDD ranges from $30 to $100 depending on placement, Davis said. At $5 a backpack, the 800 backpacks provided by Ralph Lauren cost the company $4,000. Ralph Lauren was mentioned at least once per break and in pre-drive promos.

Using Lauren’s name wasn’t intended to promote the company but to make clear to donors that WFDD wasn’t giving away their gifts, Davis said. “Donors of public radio want to know you’re good stewards of their dollars,” she said.

Correction: An earlier version of this post incorrectly described the size of WFDD’s listening area. It covers 32 counties.