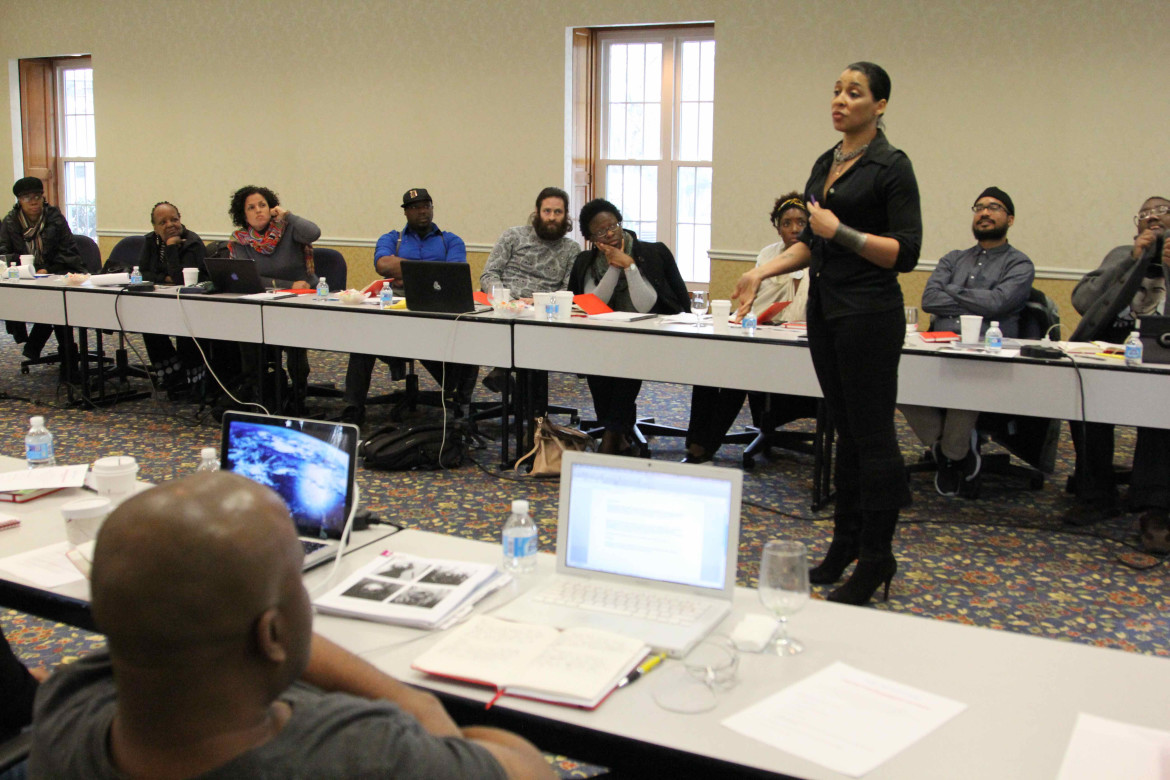 K. Neycha Herford, an identity and personal narrative expert, speaks to participants at the NBPC incubator in Harlem.

An initiative to help media creators of color break into public broadcasting is also helping those artists realize the importance of their voices.

The 360 Incubator and Fund from the National Black Programming Consortium is now taking applications for its second year of fellows, who receive mentorship, training and networking opportunities through NBPC and other public and commercial media professionals.

At the NBPC incubator in Harlem, participants hone pitches and learn to tailor their presentations to different audiences; they build toward Pitch Black, where a panel of media professionals picks winners. They can also embed within stations to better understand the public broadcasting system. Last year’s four winners continue to develop their projects and pitches, using grants from $50,000 to $150,000 from CPB.

The media makers have discovered the challenges of filmmaking in Africa, tackled the unpredictability of launching a reality show, learned how tough funding a dramatic series can be, and realized that going through the incubator “is a grind, but the payoff is great,” as one said.

The major lesson for NBPC was that “independent producers really do need this support,” said Kay Shaw, director of programs and acquisitions. “Most of the time, we give them money and hope for the best. But we’ve realized that an immersive, intensive, hands-on atmosphere really shapes those projects much more quickly.”

This 10-episode “urban fantasy” is a short-form web series about a young girl attempting to cope with her mother’s experiences with mental illness. Creator Damon Colquhoun, who has studied acting, screenwriting and photography, said that in his Harlem neighborhood, “all these brownstones have a living room, then a long hallway and a bedroom door. I thought about what it would be like to be a child with a parent in that bedroom, just losing it behind the closed door.” Mental illness runs in his own family; he’s also been diagnosed with nonspecific anxiety and obsessive-compulsive disorder.

A makeup artist works on the set of Pixie Dust.

Grant from incubator: Colquhoun received $50,000 from NBPC to produce the first two Pixie Dust episodes, each five to six minutes. He realizes that producing his project is an uphill battle. The MacArthur Foundation was initially interested in Pixie Dust, “so I went in and started my pitch. She stopped me and said, ‘Oh, this is fictional? I’m sorry, we don’t fund that.’ She had gotten so caught up in what the project had to offer that she missed that point.”

Biggest takeaway: “I was able to transition from a creative to a professional creative,” Colquhoun said. “I also learned that my authentic voice and my vision mattered to industry insiders, who wanted to hear from me.” He also found feedback from WNET executives valuable during his time embedded there.

Status of project: Rough cuts of two episodes are complete, with post-production and visual effects work scheduled for later this month. Colquhoun hopes to pitch to CPB for more funds.

How about a future in public media? “I’m at the point where commercial folks in Hollywood are starting to contact me,” Colquhoun said. “They saw my work through the incubator and are really into the project.” However, “I would prefer to continuously have projects in the public TV realm. I’d love to work with bigger budgets — that’s commercial. But I have a number of specific projects I’d love to make happen on public TV,” he said, such as an Octavia Butler miniseries.

The broadcast documentary series started as an online series in 2012. Co-creator Nosarieme Garrick, who arrived in the U.S. at age 14 after living in Nigeria, “saw how little people here knew about the African continent. I also felt that manifested in myself, not feeling that the continent had much to offer.”

Moses Gichanga, one of the subjects of My Africa Is, makes drones to track wildlife poachers.

She began writing for AfriPOP!, an African cultural magazine, “and I was inspired by so many of the stories.” As a film student, “I thought that visually it would be so amazing” to do a project on Africa. “The cities are so energetic and chaotic.”

In addition to writing and filmmaking, Garrick is also an entrepreneur. In 2010 she founded Vote or Quench, a nonprofit to educate young Nigerians about the importance of voting.

Grant from incubator: $100,000, which enabled Garrick and an Africa-based crew to film in Nairobi in July. “We had an amazing local producer. The tech positions, like audio, were tougher to find people for. But it still turned out beautifully.”

Biggest takeaway: “We were at the incubator space every day, late into the night, working and collaborating with other fellows and just getting out of our own heads,” Garrick said. Sometimes these projects are so personal, the focus is so internal,” that just interacting with others is helpful, she said. Garrick also got to work closely with Chris Hastings, executive producer at the World channel, where the series premiered Feb. 15.

How about a future in public media? Garrick doesn’t see public and commercial TV as mutually exclusive. “People are watching television differently,” she said. “It’s hard to say, ‘Everyone watch this show at noon on a Wednesday’; it’s easier to say, ‘This is available on Netflix.’ So I wouldn’t want to lock myself into just public TV. Our project has lived online, and our audience is global. We definitely want to broadcast on public TV, but also internationally.”

Street Cred is a reality TV show in which 12 Detroit high-school students learn production skills and compete to work as interns on a virtual-reality film. Kids also go through an empowerment workshop to learn how to engage people around important civic issues through film.

“It’s a new model to make content,” said co-creator Sultan Sharrief. “Beyond making a film, it’s a huge opportunity for communities and youth.”

Sharrief has directed several films, including Bilal’s Stand, a coming-of-age story of a Muslim teen in Detroit that premiered at Sundance in 2010.

Biggest takeaway: Sharrief called the incubator “impactful.” While he’s always strongly believed in his work, “I don’t always take care of myself,” he said, and often puts projects before his own financial stability. For several years he’s funded a youth-empowerment program through his work as co-artistic director of the Cinetopia International Film Festival in Detroit and a visiting lecturer at University of Michigan. “That’s just not sustainable,” he said. “The incubator acknowledges your importance as an artistic professional.”

Status of project: Preproduction is underway, with full production beginning in May.

How about a future in public media? “That’s the hope,” said Sharrief, who created the show with Oren Goldenberg. “Our pilot is for a 12-episode series. If all goes well, we hope it’s ordered to full season. And that could lead to other opportunities.”

This documentary web series seeks to reframe and celebrate black fatherhood. Garland McLaurin co-produced and directed the Peabody-winning public TV documentary 180 Days: A Year Inside an American School. After that aired, he was pondering fatherhood when he heard about the incubator.

“For a moment in time, I was going to be a father,” McLaurin said. “That didn’t happen, unfortunately. But that got me thinking about parenting and fatherhood, especially with other friends having kids.”

The engaged couple Chris Inniss and Shelton Stroman are among the subjects of Pops.

In addition to 180 Days, McLaurin’s other public TV projects including working on the three-part  veterans’ series Coming Back with Wes Moore that aired on PBS in 2014.

Grant from incubator: $50,000, which McLaurin used to hire an associate producer, work with an editor and travel to film two of the three stories. “It allowed me to set up an infrastructure and get the ball rolling.” He got additional funding from the Independent Television Service.

Biggest takeaway: McLaurin was embedded at WNET, “so I got a good feel for how a station engine runs, all the different components there, and what it takes to get a project off the ground,” he said.

Status of project: McLaurin, who’s working on the project with Jason Samuels, is editing the pilot for delivery in April.

How about a future in public media? “I also went through Producers Academy,” McLaurin said. “I’ve worked on other PBS projects that are working their way through the pipeline. I love public TV and its mission.” He’d also encourage other filmmakers to give the incubator a try. “They’ll have really good experience,” he said. “It’s a grind, but the payoff is great.”