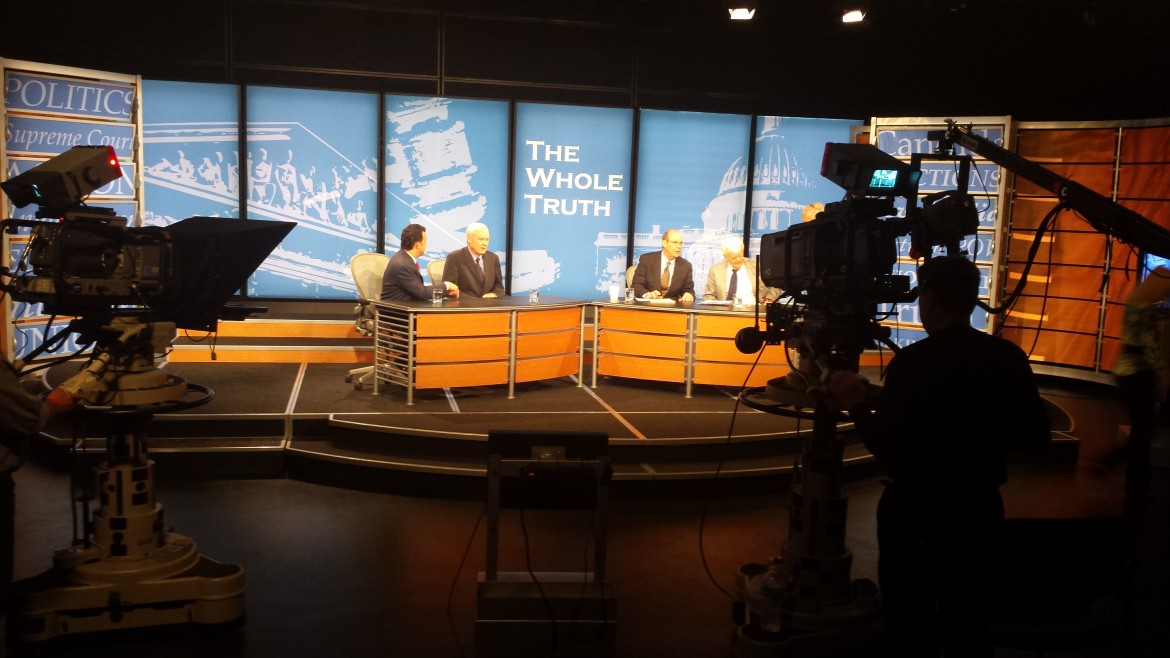 From left: John Avlon, Chris Matthews, host David Eisenhower and Al Hunt discuss the state of political media in the pilot episode of The Whole Truth. (Photo: The Whole Truth)

John Avlon, Chris Matthews, host David Eisenhower and Al Hunt discuss the state of political media during filming of the pilot episode of The Whole Truth. (Photo: The Whole Truth)

The Whole Truth, a 30-minute talk show, will premiere nationwide in April. An initial batch of seven episodes will address issues such as U.S. campaign finance laws, partisan gridlock in Washington and income inequality. Its objective is to foster deeper discussion and less partisan bickering than other cable talk shows might showcase.

The Whole Truth is the first TV series produced by the World Affairs Council of Philadelphia, a nonprofit educational and public affairs organization. It’s partnering with American Public Television on the show.

“So much on television about political issues and public policy issues is highly partisan,” said Craig Snyder, WAC Philadelphia’s c.e.o. and president. “We think there’s an important role for a show like this, which brings people with different points of view together for civil, thoughtful discussion.”

Eisenhower is director of the Institute for Public Service at the University of Pennsylvania and has written two books, including Eisenhower at War, an examination of his grandfather’s years in World War II that was a finalist for the Pulitzer Prize in history. He had previously spoken at the WAC and signed on to the show last March.

Eisenhower said he is intrigued by the possibility of learning from experts and aims to approach the show’s subjects from areas of common ground.

“This is a search for truth,” Eisenhower said. “My editorial point of view on this show is to extract stipulations and to elicit opinions and judgments that actually move the ball in public dialogue somehow.”

Maryland Public Television produced a pilot for a previous iteration of The Whole Truth in 2012, featuring former Sen. Arlen Specter. The MPT pilot examined the Supreme Court’s controversial Citizens United ruling, but the program was shelved when Specter became ill. Snyder, Specter’s former chief of staff, took the idea with him to the World Affairs Council.

A model for The Whole Truth is PBS’s Fred Friendly Seminars, which explored issues “deeply, thoughtfully and civilly,” Snyder said. He said he believes that there is a hunger for such shows. “… [W]hat I hear over and over is people are turned off by what they see on other shows,” he said.

Each episode opens with an overview of an issue and closes with Eisenhower delivering his take. In between, viewers see 20 minutes of discussion of the subject among Eisenhower and several guests.

Panelists were polite, measured and frequently in agreement. They all believed, for example, that smart satire mixing politics and entertainment is good for informing Americans, and that it’s time for nonpartisan media to start “playing offense” against partisan media, though they offered few ideas about how it should do so.

Eisenhower said he found much more agreement than he initially expected by avoiding controversial news topics in favor of more fundamental issues. For instance, “instead of asking for their opinions of the Ferguson coverage and dividing the audience at the outset, I approached it from a more basic level,” Eisenhower said. “The approach was how well their profession of journalism is doing its job.”

While the show is still ironing out some technical hiccups noticeable in the pilot episode, including some startling jump cuts and sudden zooms, Snyder said he expects a “consistent up curve” as his team continues to develop its television production capacity.

So far, 78 stations have expressed interest in The Whole Truth. A second batch of episodes is planned for later this year or early 2017.