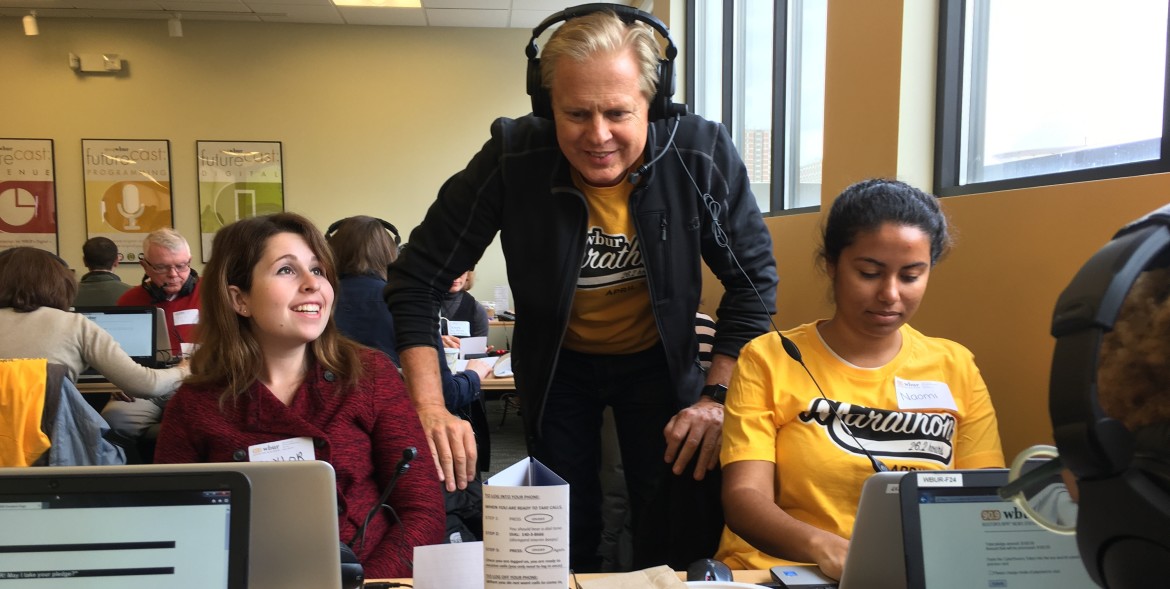 Executives at Boston’s WBUR were on edge after deciding to set a $1 million goal for their spring fundraiser while allowing just 26.2 hours of on-air pitching.

“We were scared out of our minds,” said Charles Kravetz, g.m. “We thought that we could as easily fall on our faces as succeed.”

The station created a marathon theme for the campaign, adding a new twist to the one-day fund drive model used by other pubradio stations. By tying the length of the April 7-8 drive to the Boston Marathon, they gave the fundraising team slightly longer than one day and three consecutive drive times to hit the goal.

“We went into that morning feeling a little stressed,” Kravetz said.

By 9 a.m., the final hour of that morning’s drive, the station was nearly there: The campaign was $172,000 short of its goal. With 11 minutes to go, the gap was down to $54,000. (One staffer captured the dramatic final hour on the new Facebook Live platform, attracting more than 2,200 viewers.)

When WBUR surpassed the goal, it set a historic record. “We were raising [money] at the rate of close to $3,000 a minute,” Kravetz said. “I don’t know, maybe some other station has done that. We’ve never done that, I can tell you that.”

In the end, the campaign raised $1,005,027 in 8,923 donations, according to Mike Steffon, WBUR’s director of membership and campaign strategy. About $260,000 of those contributions came in during a 16-day pre-campaign that introduced the idea of a Boston fundraising marathon, told listeners when it would take place and asked for their support.

WBUR’s marathon campaign succeeded amidst a wave of experimentation with shortened fundraisers by public radio stations large and small.

Fundraising consultant John Sutton described the trend as a “pledge-drive shortening renaissance.” A “couple of dozen” stations are experimenting with shorter drives, possibly “an all-time high,” he said.

As more stations build their sustaining-member programs, Sutton observed, the monthly income generated from those donations relieves stations from having to raise as much money on-air.

Two years ago, WBUR raised $1.2 million during a six-day fundraiser, slightly more than its new 26.2-hour record. The station began to “aggressively” promote sustaining memberships four years ago, according to Steffon. As a portion of total membership revenue, sustaining donations grew from 12 percent in fiscal 2012 to about 32 percent this year.

“The growth in this program means we are less dependent on on-air fundraising,” Steffon said.

Sutton points to other possible explanations, such as stations’ growing capacity to raise funds on digital platforms; better listening data that has shown how much fund drives disrupt listenership; and fear that on-air campaigns will drive listeners to other audio content.

“We got a lot of feedback from people admitting, for the first time, that they were actually tuning in to hear the fundraising pitches.”

Stations are using two main models to shorten drives, and plenty are “trying creative ways to knock a few days off their drives,” Sutton said.

NCPR has been able to raise enough funding during its pre-drive to cancel the on-air campaign, Sutton said.

Another approach preserves the on-air drive but limits it to a day. With this format, a station tries to raise its usual pledge drive goal within a 12-hour span covering Morning Edition and All Things Considered. This model also includes raising money by soliciting contributions before the on-air drive.

WSKG in Binghamton, N.Y., was one of the pioneers of this model. The station first experimented with a one-day drive in 2008 after the membership manager noticed that most gifts came in during the first and last days of on-air pledge, said Brian Sickora, WSKG president.

“It wasn’t like we did a lot of regression analysis and statistical analysis to figure it out,” Sickora said. “… It really was just a hunch.”

The station has since mixed one-day drives with longer drives. But this fiscal year, which started last fall, WSKG went all in on one-day drives, holding one in the fall and another this spring. In both drives, the station exceeded its goal of $100,000.

“People love it,” Sickora said. “People are super-excited when we’re on air because everyone [at the station is] fired up. You bring your A game, because tomorrow it’s over.”

John Davidow, WBUR’s executive editor of new media, and station staffers gather for a kickoff rally before the fund drive.

WBUR’s take on the one-day drive

Though one-day drives have been around for years, WBUR’s latest take on the concept offers new insight into what makes for a successful short drive.

Station executives believe the drive’s success stemmed from its “marathon” theme and 26.2-hour length, references to the annual Boston Marathon, held about a week after the drive. The concept gave the station a “strong hook” to a community event that a lot of people prepare for, Kravetz said.

Steffon said the marathon theme resonated with the community. “People rallied behind the idea,” he said. He pointed to a tweet from a parent who said her son actually wanted to hear the pledge drive.

I'm #teamWBUR because my 7 yr old just requested that I turn on the pledge drive on his bedroom radio.

The theme also allowed the station to play with marathon themes and metaphors that allowed for compelling radio, according to Jay Clayton, a fundraising consultant who worked on the campaign. Clayton knows the market: He was WBUR’s director of marketing and membership from 1986–2002.

For example, radio and podcast host Luke Burbank, a panelist on Wait Wait … Don’t Tell Me!, reported on the fund drive as if it were an actual marathon. Staffers even received cups of water, as if they were runners trying to stay hydrated.

“He would report from … the phone bank, the hallway where people were handing out cups of coffee to the staff and volunteers to keep them energized through the marathon,” Clayton said. Those spots “gave people the feel of a real marathon playing out on the radio. It gave them something to pay attention to and get engaged in and ultimately get involved in with their financial support.”

These elements and the shorter campaign provided more drama for listeners and staff, Kravetz said. “We got a lot of feedback from people admitting, for the first time, that they were actually tuning in to hear the fundraising pitches,” he said.

A 16-day pre-campaign also helped get the message out before on-air pledging began. WBUR promoted the campaign with on-air spots, direct mail and postcards at events. It also encouraged use of the hashtag #teamWBUR, according to Kristen Holgerson, marketing and promotions director. Donors who gave prior to the on-air campaign got a T-shirt and were asked to tweet a picture with the shirt and hashtag.

WBUR continued to take advantage of digital platforms as it moved into the on-air campaign. It used a new digital-fundraising platform, Kimbia, to aggregate discussion of the drive across social media and help people follow progress toward its fundraising goal.

“In addition to the hashtag campaign, we were all over Snapchat and the live feed on Facebook and Twitter,” Holgerson said. “It really created a very visceral community. … That last hour was when people went online, they were like ‘I’ve got to see this.’”

WBUR’s take on the one-day drive was a “simple and brilliant twist,” Sutton said.

The station “found a way to reinvigorate the playbook,” he added. “… They said, ‘Let’s redefine what a day is,’ and dressed it up” in a way that got listeners to buy into the campaign, he said.

It also didn’t hurt that the additional 2.2 hours allowed WBUR to squeeze in two Morning Edition broadcasts with the on-air drive.

“A big part of the significance of this … is that it’s the first time that a station this big has raised a goal this big in such a short amount of time,” Clayton added.

A history of shorter drives

WBUR has been experimenting with shorter on-air drives for decades. In 1997 it succeeded with a “Power Hour,” in which it tried to raise a day’s worth of money in an hour. Sutton devised the idea and worked with Clayton to implement it.

Station leaders chose their best fundraising hour, which was Car Talk with hosts Tom and Ray Magliozzi. “It worked phenomenally well,” Clayton said. The station raised $74,000 in an hour.

WBUR has continued to experiment with different approaches. In 2008 it held 44 days of on-air fundraising, but since 2011 it has limited drives to half that length. “This year we anticipate the total number of days will be less, due to the success we had in the spring,” Steffon said.

Its fundraisers have adopted slogans such as “More programming, less fundraising” and “All the money in half the time” to try to raise more money off-air, mainly through direct mail.

“I do feel very strongly that public radio stations have to find new paradigms for fundraising,” Kravetz said. “We can’t keep interrupting the news for days at a time. There’s more and more options for people to go elsewhere.”

The one-day campaign is “not going to eliminate every fundraiser,” Kravetz said, but he’s certain WBUR will use the tactic again.

Even as more stations experiment with less on-air fundraising, Clayton cautions that they should consider possible drawbacks.

“This isn’t necessarily something that every station should do,” he said, “although it can be an incredibly great thing for stations that are in a position to do it.”

“You’re not necessarily having to do longer drives to educate listeners and spend all that time that a longer drive does effectively to increase the number of givers and educate people about the importance of giving,” Clayton said.

On-air pledging can help keep donors in the loop. WSKG’s Sickora found that when the station moved to one-day drives, a major donor didn’t renew her pledge. She missed hearing the pledge drive, which would have reminded her to give.

For WSKG, the adoption of one-day drives has meant sacrificing some revenues the station would expect to raise with a longer campaign.

WSKG has offset the dip in on-air fundraising by focusing on sustaining members — who make up about 30 percent of its membership. Its major giving program has also grown from $40,000 to nearly $400,000 a year, according to Sickora.

Despite these challenges, Sickora believes that more stations both large and small should consider shorter drives. He hopes WBUR’s successful campaign “proved to the skeptics that any station of any size can do this,” he said.

Larger stations might be less willing to take the risk because of the money at stake if they fail, but “it’s the same at the small stations,” Sickora said. “… The scale’s just different.”