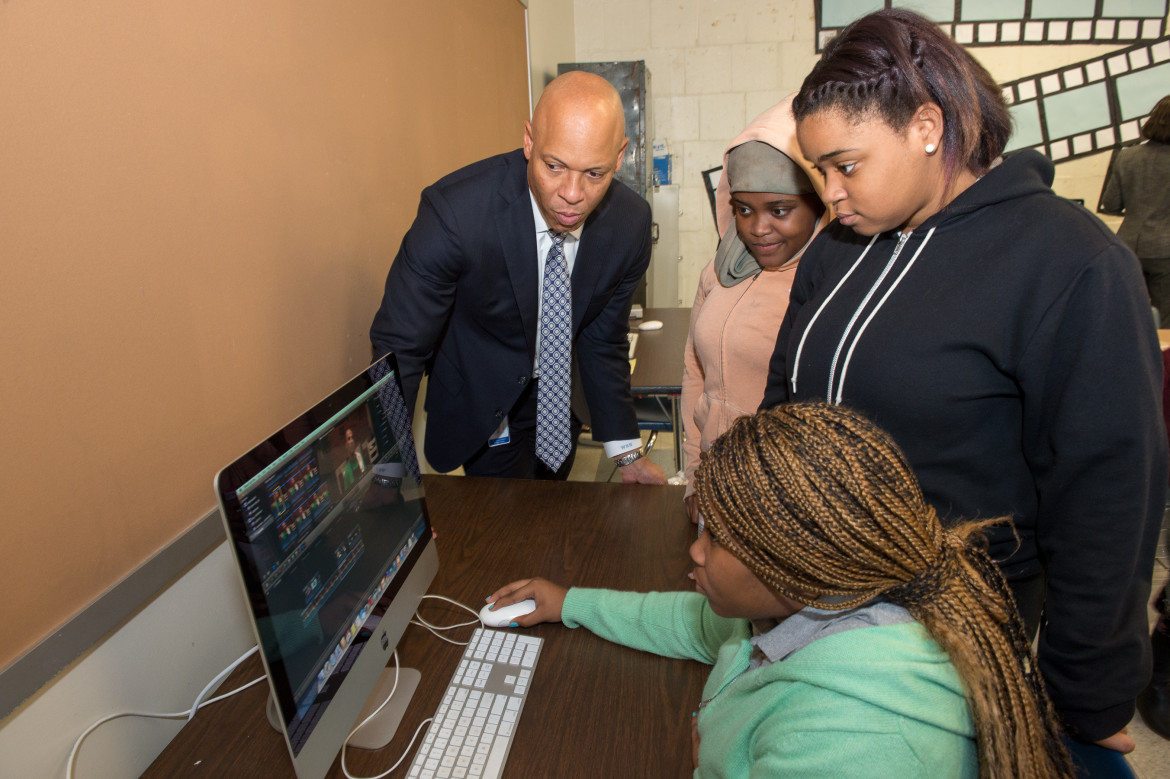 School Superintendent Dr. Hite with students at an editing station in the media lab. Photo courtesy of WHYY.

A $751,000 grant will help Philadelphia’s WHYY expand a media production program within its city’s school system, extending support for a pilot program that was found to improve media literacy, writing and listening skills.

WHYY staff will provide equipment and training to 27 local schools over the next three years. Their work builds on the joint licensee’s Dorrance H. Hamilton Public Media Commons, a documentary and editing course. Offered for more than 10 years at WHYY’s headquarters, the course reached capacity at 1,000 students, adults and educators a year, according to William Marrazzo, president and CEO of WHYY.

Noticing the appetite for digital skills and storytelling, WHYY decided to expand the program in the form of after-school media labs, Marrazzo said. A two-year pilot of 18-week courses at eight schools provided a documentary filmmaking program for students and a digital training program for teachers.

The William Penn Foundation funded the pilot program and gave the grant for the latest expansion of the classes. Five schools received cameras, software and training this school year, with 10 more schools participating in 2016–17 and 12 more the following year. More schools applied to participate than could be accommodated by the grant.

Students in a pilot program at Bodine High School for International Affairs named their club the Bodine Marketing Club and produced a six-minute documentary about immigration with the help of WHYY. The piece was narrated by a Haitian immigrant in the program.

Bodine was among the pilot schools that received Apple computers, cameras and professional editing software from WHYY. Three teachers and nine students went through the full program, according to Aaron Greberman, who teaches computer science, personal finance and IB business management at Bodine and oversees clubs at the school.

“It was nice to see the students working hard on something they enjoy,” Greberman said.

Kathryn May, a literature teacher at Parkway Northwest High School for Peace and Social Justice, used the program’s equipment with her 12th-grade classes to make campaign ads for Macduff and Macbeth. The project stemmed from the class’s analysis of Philadelphia political ads and a reading of Macbeth, May said.

“I think it engaged them in a way that doesn’t happen if you’re just going along reading the text,” May said.

The classes hosted a movie screening, complete with popcorn, May said. She could see that the students were excited about having produced professional-level work, she said.

Students in the pilot programs were imaginative and curious, had stories to tell and were comfortable in the media labs, Marrazzo said. WHYY plans to use student contributions on its program Anthology, which has highlighted some of the best student work from the Media Commons and media lab programs in the past, said Craig Santoro, director of media instruction at WHYY.

While gaining digital skills is important, social skills, including community engagement and self-esteem, are a higher priority of the program, Marrazzo said.

Research for Better Schools, an independent evaluator, found that media labs helped students care more about school by putting them in a hands-on learning environment that most other classes don’t offer.

The biggest complaint from students and teachers was that they needed more time to work on the projects, according to Research for Better Schools. The next round of media labs will be ongoing.

When the pilot program at Bodine ended, the equipment left the school with WHYY. “Once they took that back, we struggled a bit,” Greberman said. The Bodine club is now  using Greberman’s personal laptop and older digital cameras that the school already owned.

The school can’t afford to buy more equipment, according to Principal Karen Thomas. “We’re literally in starvation mode,” she said. Facing chronic shortfalls, Philadelphia has been shutting down schools and laying off teachers in recent years, according to a 2014 NPR report.

Despite the equipment hurdle, the Bodine Marketing Club is now producing a promotional video for the school. “When you combine the pleasure of creating something and meeting a need, it’s great progress,” Greberman said.

Access to technology is a “huge” problem at a lot of Philadelphia schools, May said. Classrooms can produce videos with the technology students own, such as smartphones, but the quality pales in comparison to what can be done with the professional equipment that WHYY provides.

The new phase of the WHYY labs will give schools some relief, however. The equipment schools receive over the next three years will stay with them after teachers are trained, Santoro said.

WHYY also determined they would be able to return some equipment to schools from the pilot, a WHYY spokesperson said via email. Parkway will be receiving two cameras and two editing stations.

Marrazzo said he likes to think of WHYY’s TV and radio programming as a launch pad for ideas, and digital learning is a part of that effort. Teachers trained through the media lab program will help facilitate digital learning by staying with the school and sharing knowledge with future students, Santoro said.

Santoro acknowledged that the program is now serving just a portion of the schools that wanted to participate. “But there’s lots of room for growth,” he said.