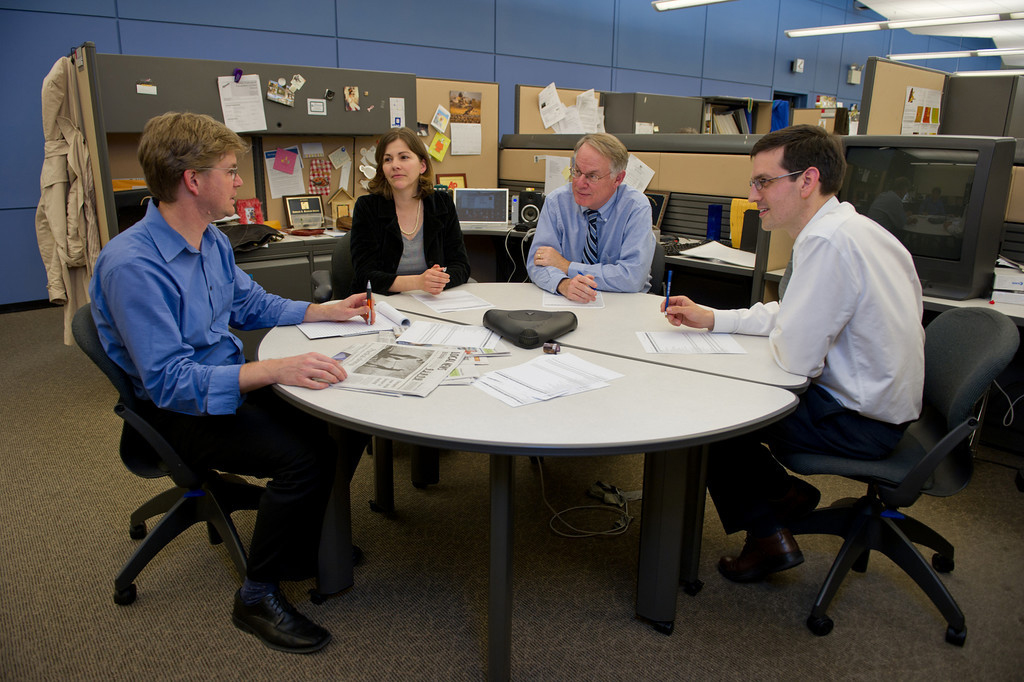 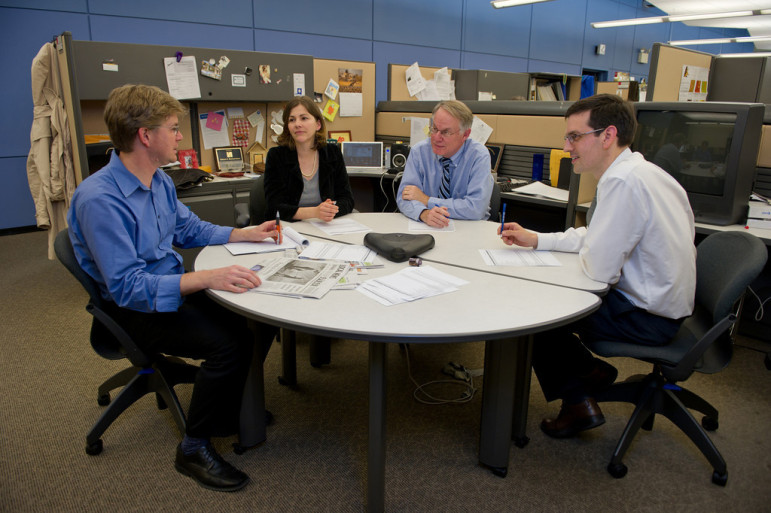 In a 2012 photo, Satullo, third from left, meets with staffers at WHYY. (Photo: WHYY)

Employees at WHYY in Philadelphia say they are shocked and concerned about the future of the station’s newsroom after learning last week that Vice President of News Chris Satullo would be leaving the station.

“Not having Chris blows a hole right in the heart of the news operation at WHYY,” said a WHYY employee, who asked that their identity not be revealed for fear of losing their job. “It’s an understatement that staffers are discouraged.”

All three employees who spoke with Current said they didn’t know why Satullo left the station or whether it was his decision. When reached for comment, Satullo declined to discuss details of the move. A station spokesperson declined further comment, adding only that “we appreciate everything that Chris has done to build our news operation at WHYY.”

In a memo, WHYY President Bill Marrazzo listed Satullo’s accomplishments at the station and said that Satullo “has decided to move on from WHYY to other activities.” The station announced Wednesday that John Mussoni will take over as interim v.p. for news & civic dialogue starting Sept. 14, as the station begins a search to fill the position on a permanent basis. Mussoni has been managing editor of WHYY’s Delaware news operations since 2009.

According to Philadelphia Magazine, Satullo told staffers after the news of his departure was announced, “Please trust me when I say I simply cannot answer many of your questions right now.” He added that he did not know what his next job would be.

One employee said that Marrazzo addressed the newsroom in a morning meeting Friday and emphasized that Satullo had resigned. But employees question the likelihood of Satullo leaving willingly.

“He was in the middle of all these projects,” one employee said, citing preparation for the Pope’s visit to the city; The Pulse, a WHYY show about health, science and innovation with ambitions of national syndication; and the acquisition of PlanPhilly, a local urban planning website.

The employees independently speculated that Satullo disagreed with the station’s upper management about allocation of the newsroom’s resources. Satullo often pushed for additional resources for the newsroom but ran into resistance from management, an employee said.

“There’s no other reason he would leave right now,” another employee said. “He’s got 20 balls in the air, and he loves this place.”

Former employees who worked with Satullo said they were surprised by the move, considering Satullo’s accomplishments at the station.

Zack Seward, an innovations reporter for WHYY from 2012 to 2014, said that he thought of Satullo as a mentor and someone who brought credibility to the station’s journalism.

“My understanding is that he really turned that place around,” said Seward, now editor-in-chief of Technical.ly, a website that focuses on technology.

“It’s a huge loss for WHYY,” Seward added. “Seeing his leadership in the newsroom and how he fostered a news culture [and] knowing that he’s not going to be a part of that is a bummer for public radio in Philadelphia.”

Going forward, employees said they’re concerned about who will the lead the station with innovative ideas.

“He had a big vision,” a WHYY employee said. “He was a journalist, but he had good management skills. He could take ideas and make them happen. That will be sorely missed when he leaves WHYY.”

Employees said they were also concerned about the fate of The Pulse, which WHYY has been angling to take national. “He was the show’s biggest proponent and has been beefing up resources to make it a national program,” an employee said.

WHYY has received $300,000 from the Robert Wood Johnson Foundation within the past two years for The Pulse. According to the foundation, WHYY has planned to “offer Pulse content to the NPR news network and other partner stations.” Satullo was a project director on both grants.

“Having Chris leave is a major blow for that show,” said Seward, who was part of The Pulse’s founding team. “He helped shape the vision.”

“He did a lot to secure the financial footing of The Pulse . . . That show itself pulled in serious funders,” he added. “He was able to get people on board who previously hadn’t supported public media.”

Other former employees who have worked with Satullo and listeners of the station reached out to him and commented about the move on social media.

Really sad to hear @chrissatullo is leaving @whyy. He was a great boss, and is a great guy. http://t.co/kl9Qd6RGCZ

.@chrissatullo is one of my favorite people in Philly media. Sad to see him leave WHYY but excited to see what he does next.

Thanks for everything, @chrissatullo! Your support and guidance mean the world to me.

And Satullo’s daughter, Sara Satullo, tweeted at her father, “I couldn’t be prouder of you.” She declined to comment further.

I couldn’t be prouder of you @chrissatullo Chris Satullo Out at WHYY | News | Philadelphia Magazine http://t.co/QcyuM6XyfK via @phillymag

A Facebook group, “Journalists for Satullo,” was started after the news that Satullo would be leaving. “Day in and day out Chris gave everything he had to make Philly journalism better,” a post said. “He made a difference.”

Day in and day out Chris gave everything he had to make Philly journalism better. He made a difference. From the halls…

Posted by Journalists for Satullo on Thursday, September 3, 2015

WHYY executives have said that they are committed to carrying on projects started by Satullo.

“I want to emphasize that all of the current news projects — coverage of the Pope visit, national distribution of The Pulse, Keystone Crossroads, State Impact — as well as the high quality of daily journalism, will be moving forward,” said Art Ellis, v.p. of communications and member relations, in a statement to Current. “We have a dedicated team of reporters and producers who will continue to maintain our high standards.”

That message was also communicated to staff, according to an employee.

But “the big worry is that Chris was the guy who brought in the money, and he was able to bring in the money,” the employee said. “Nobody at WHYY has been able to do that in the past.”

Molly de Aguiar, director of media grants at the Geraldine R. Dodge Foundation, said on Twitter that Satullo was the reason the foundation started funding NewsWorks. The Foundation awarded the station $50,000 in 2014 for reporting on New Jersey.

I've been stewing this wknd over Chris Satullo's departure from WHYY. Philanthropy is especially tricky when innovative leaders leave an org

@GRDodgeMedia So disappointing to see innovative leaders get pushed out.

Reached by email, Aguiar declined to comment further on Satullo’s departure and added, “I have zero knowledge of what actually happened.”

Rob Bole, former v.p. of digital media strategy at CPB, also endorsed Satullo’s importance as a fundraiser in a post on Satullo’s Facebook page. “I was the grant officer at the Corporation for Public Broadcasting that funded NewsWorks,” Bole wrote. “I would have not recommended that investment (a substantial one) without Chris’s involvement or leadership. He was essential to our confidence in editorial and audience development success of this new venture.”

This article has been revised to clarify de Aguiar’s remarks on Twitter and to include a statement that WHYY provided after publication.