Brick City Live, New Brunswick Today and NJTV News are the latest newsrooms to adopt the audience-driven platform, and many others are in “various phases of running use of Hearken up the chains at their organizations,” said Hearken co-founder and CEO Jennifer Brandel. 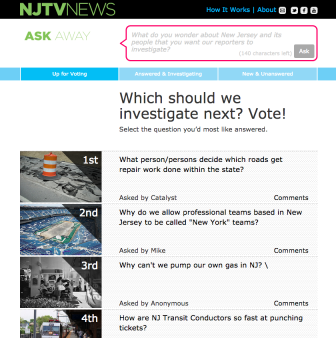 The New Jersey news sites will look for opportunities to collaborate on covering stories that bubble up through Hearken, Stearns said. “So Brick City Live and NJTV might co-report a Newark story for TV and online,” he wrote in an email. “Or NJTV might report a story and then New Brunswick Today could translate it into Spanish.” The collaboration is being coordinated by the Center for Cooperative Media at Montclair State University, where the organizations share studio space, offices and access to training and support, according to Stearns.

Brandel modeled Hearken after Curious City, which she launched at WBEZ in Chicago with support from the Association of Independents in Radio’s Localore initiative. Curious City continues at WBEZ, while Hearken has since independently branched off to establish its own funders, media partners and team of developers.

“We’re still very much in the early adopter phase, and we’re in the early days of our platform,” she said. “Got a lot of features on our roadmap but what we have is working well and we’re onboarding more newsrooms and open to whoever is interested.”

Hearken works by allowing the public to submit questions or vote on other questions via a website. The newsroom maintains control over the platform, its back-end bells and whistles and the questions people submit.

The newsroom then selects the most popular question and assigns a reporter to answer it with original reporting.

Of the 26 queries submitted to NJTV News’ “Ask Away,” for example, questions range from “How many NJ Transit buses are there on the road on any given day?” to “Why can’t we pump our own gas in NJ?”

“This is a great way to bring the public further into public television,” NJTV General Manager John Servidio said in an announcement of the launch. “We are dedicated to statewide news coverage, and the NJTV News Ask Away feature will help us further extend our news reach with items of local interest.”

A few years after launching Curious City at WBEZ, Brandel left the station at the end of last year to pursue scaling up the model and the technology. Her relationship with AIR led her to the New Enterprise Fund for StoryMakers and other foundations.

Brandel used the startup accelerator program Matter to further experiment with the technology earlier this year. Hearken is a full custom platform built on Ruby on Rails by its CTO and co-founder Corey Haines, Brandel said.

Although at least four foundations have funded the project, Hearken is not free. The cost to newsrooms is based on a sliding scale determined by factors including the size of the newsroom, the website’s monthly traffic, and whether the newsroom is for-profit or nonprofit.

“With this project, we are creating a foundation for experimenting with new forms of community participation and collaboration in local journalism,” said Molly de Aguiar, Geraldine R. Dodge Foundation Media Program Director. “At the end of the day we think involving the public more deeply in reporting — getting them involved in the process before a single word is written — is critical to fostering more connected communities as well as building a more financially stable future for local news.”