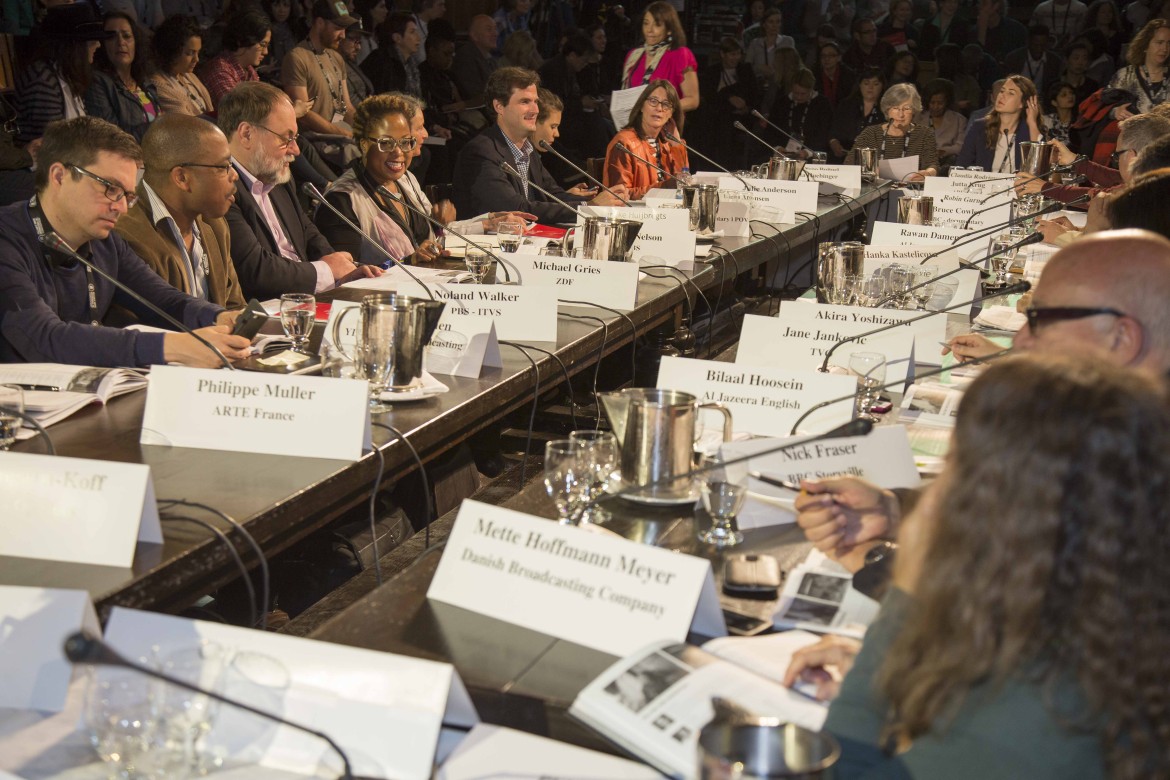 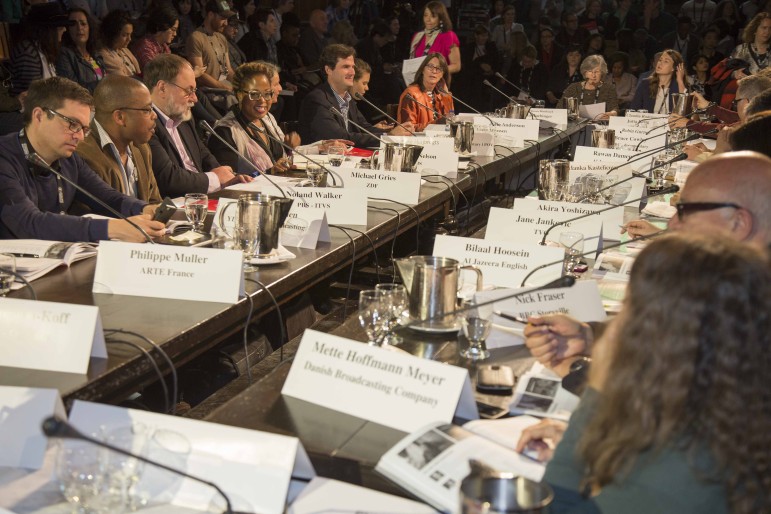 TORONTO — There’s a pronounced sense of the past inside the Great Hall of Toronto’s landmark Hart House. Gothic Revival architecture. Soaring stained glass windows. During the annual Hot Docs Forum, however, the atmosphere can feel more like the Roman Colosseum.

Every year aspiring documentary makers come to Hot Docs to pitch new work, much of it destined for public TV channels around the world. The result is the Circus Maximus of the nonfiction film world: thumbs up or thumbs down, from commissioning editors whose support can mean (financial) life or death.

Like several film-festival counterparts around the world — the MeetMarket in Sheffield, England, for instance, or the social issue–oriented Good Pitch, which just took place in Chicago — the Hot Docs Forum connects filmmakers with financing. The routine hasn’t changed much in 16 years, but the faces have.

“I see a lot of nouveau people here,” said veteran forum moderator Axel Arnö of Sweden’s SVT, addressing several hundred spectators and a dozen or so seated around the room’s centerpiece table. He noted the new faces throughout. “We hope you’re nouveau riche because we need your cash.”

Commissioning editors from some 20 media organizations, including Arte, Canal+, CNN, PBS, Al Jazeera, New York Times Op-Docs and MSNBC, were crammed around the table. The supplicants can range from first-time producer-directors to Frederick Wiseman, the dean of American documentarians, who pitched his 40th film, In Jackson Heights, at this year’s forum.

Filmmakers who pitch their projects get immediate feedback, some of it helpful, some of it brutal. Documentaries that have been vetted through the forum to go onto acclaim include An Honest Liar, Let the Fire Burn, Oscar nominees Finding Vivian Maier and How to Survive a Plague, and the upcoming Best of Enemies, which won the documentary competition at this year’s Sundance Film Festival.

First up at this year’s Hot Docs: Big Sonia, the story of 89-year-old Holocaust survivor Sonia Warshawski, who for 35 years has run a combination tailor shop and salon in what is now a dying Kansas City shopping mall. After a few introductory remarks by would-be filmmakers Leah Warshawski (Sonia’s granddaughter) and Todd Soliday, a clip was shown that included testimonials from family members, scenes from the mall and, in one close-up, the tattoo Sonia wears on her forearm.

But there was no footage of Sonia, a strange omission given that she’s the film’s title character. The filmmakers reassured the judges that they do indeed have footage in which the elder Warshawski “finally lets down her guard and reveals her humanity.”

Around the table, the response leaned toward the positive. “I’m very interested in it,” said POV’s Chris White. “It’s a Midwestern story. She’s the type of woman we all want to meet. It’s also a uniquely American story because of the dying mall. It’s possibly a good match for POV.”

Two Canadian public broadcasters, Naomi Boxer of TVO and Murray Battle of The Knowledge Network, also gave thumbs up to the project. Michael Gries of Germany’s ZDF, said, “We never have enough of these stories,” and Guy Lavie of Israel’s YesDocu said, “I’m looking for non-Holocaust films for Holocaust Day in Israel” to considerable laughter, since Sonia Warshawski’s background goes unmentioned in the clip.

But the omissions bothered Mette Hoffmann Meyer of the Danish Broadcasting Corp. “I did not find the trailer so informative,” she said, noting that the only interviews were with family.

“We have other footage,” said the filmmaker Warshawski, “but we’ve been so busy.” There was a collective intake of breath: What in the world could have been more important than their footage and their pitch?

Next up was Thief’s Bazaar, portraits of underprivileged Indians in the economically accelerating city of Mumbai. It certainly looked beautiful. “Incredible footage,” said Kristin Feeley, of the Sundance Institute’s documentary program. White said he had questions but was interested in seeing more. Others seemed interested in seeing less. 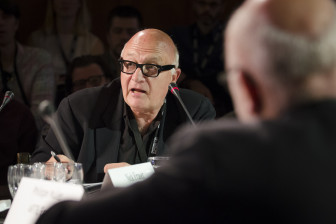 “I have a lot of questions,” said Nick Fraser of the BBC’s Storyville. “Your trailer is overly cinematic; much of it is staged. India is, along with China, going through the fastest process of development in the world, so why focus on people we’ve seen many times before? It’s facile, fake. You could easily have gained access to India’s elite. Half of them are here,” he concluded, to laughs.

The filmmakers made a valiant effort to rebound but never quite recovered.

Throughout the forum’s first morning, April 29 (it’s a two-day affair), projects got varying degrees of support. Olancho, for instance, is to be a study of pop musicians whom drug lords pay to write songs about them. This film focuses on Honduras, “the most murderous country” in the world, according to Honduran filmmaker Esther Anino.

Noland Walker, the senior content director/co-curator of Independent Lens, was enthused. “It’s definitely good for us,” he said. “I want to talk about how we can make that happen.”

Fraser was less ecstatic. “I’m not sure what the story is,” he said, adding, “It’s hard to get audiences for stories about Latin America.”

One project that generated support up and down the table was Playing God, which focuses on Kenneth Feinberg, the “pay czar” selected by the U.S. government to oversee victim compensation following the 9/11 terrorist attacks; more recently he has dealt with BP’s payout to fishermen victimized by the Gulf oil spill. Everyone at the table expressed interest in the film, including Marie Nelson, v.p. of news and public affairs for PBS. Even the reliably acerbic Fraser was enthused.

“We definitely want it; it’s a great project,” he said. “But your trailer is flat and boring. It’s like a public broadcasting program.” Up in the stands, spectators laughed despite themselves.

“This is a performance,” said outgoing POV executive producer Simon Kilmurry, who was observing from the audience. Most of the serious discussion about film commissioning was going on offstage, he observed, and much of the public comment at the forum, other than Fraser’s, was pretty innocuous. “I don’t want to crush anyone’s dreams in public,” said Kilmurry, referring to his past times on the panel, “so I’ve been a bit anodyne myself in the past.”

That offstage process was no big secret. In fact, it was behind Walker’s support for Olancho.

“I met those Olancho guys in Montana at the Big Sky Festival in a small forum,” he said. “I met with them, talked with them, and right now they’re a quantum leap beyond where they were then. The story may not be solid yet, but their footage communicates a lot. They’re young filmmakers, but open and able to learn and grow at a very fast rate.

“When I saw them in the pitch book,” he said referring to the forum program, “I thought, ‘It seems a little soon for them.’ But when I saw them pitch, I said, ‘Wow, they’ve been taking notes and paying attention.’ They really know how to shoot and they are on their way, potentially, to articulating a very complex story.”

Asked about the Big Sonia pitch, White said it rang a lot of bells. “I don’t think it’s a Holocaust film,” he said, “and I do feel we need to get to know her better. But I found her vibrant and energetic and a hopeful example of how to live your life and age gracefully. She has faced challenges most of us can’t imagine. We look for those kinds of stories.”

Sometimes, the reactions defy expectations: A Better Man, to be directed by Attiya Khan and Lawrence Jackman, will have at its core Khan’s conversations with her ex-boyfriend of 20 years earlier, whom she claims abused her daily throughout their two-year relationship. She wants to know why. He seems ready to cooperate.

The commissioning editors all sparked to the concept. “The subject matter certainly appeals,” said PBS’s Nelson.

A film called The New Missionaries, about a sex-oriented religious cult in Africa which runs a rehabilitative clinic for victims of female genital mutilation, won few fans despite its pedigree (director Yoav Shamir is a well-established Israeli documentarian). New Sensation, about the birth and influence of MTV, didn’t win outright acclaim either, though there was some support.

But it’s easy to see why fear is a factor at the forum. Sara Nodjoumi, who aims to produce a film called When God Sleeps about an Iranian musician placed under a fatwa, had worried that she would be at a disadvantage because her pitch was scheduled for the second day of the forum. Having seen the first day, she changed her mind.

“I’m super-thankful I have another day,” she said. “I’m thankful to be able to see what works and doesn’t work.” She felt newly confident.