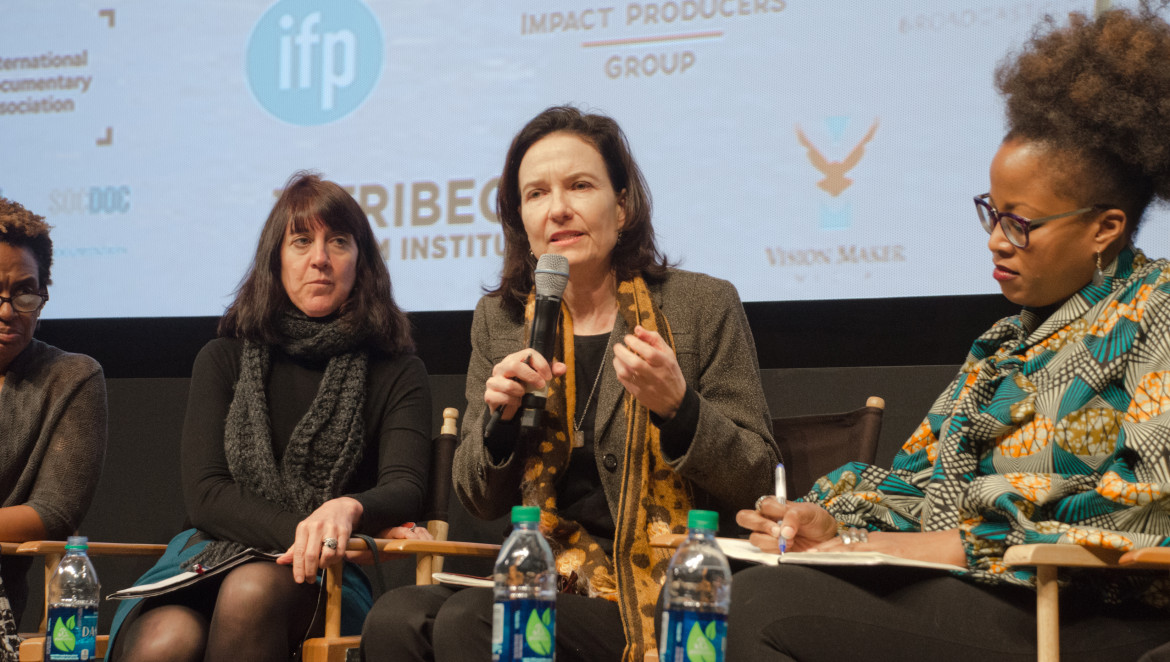 Sally Jo Fifer, president of the Independent Television Service, speaks to attendees at a New York stop in a listening tour about the place of independent documentaries on public TV. (Photo: Andrew Popper) 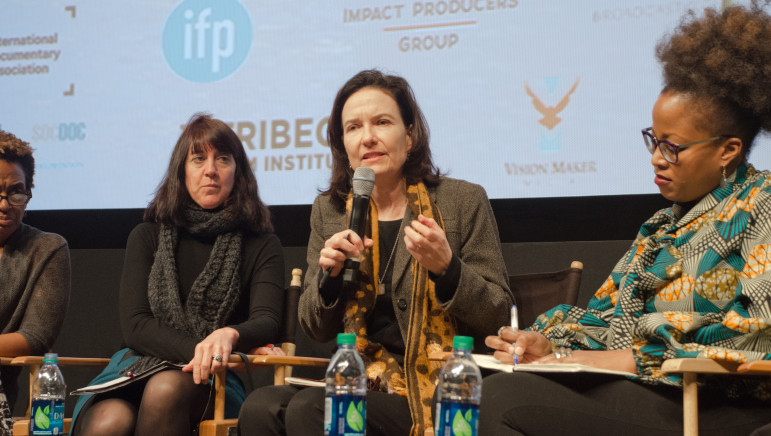 Sally Jo Fifer, president of the Independent Television Service, speaks to attendees at a New York City stop in a listening tour about the place of independent documentaries on public TV. (Photo: Andrew Popper)

NEW YORK — Any benefits from the town-hall-style “listening tour” that stopped here Monday courtesy of PBS and several other public media organizations were strictly therapeutic.

Independent filmmakers, one after another, vented their outrage and frustration with what they see as neglect and abuse committed by public broadcasting’s most prestigious TV outlet, New York’s WNET.

Meanwhile, representatives of WNET and PBS sat on stage at the SVA Theatre in Manhattan, looking as if they were both listening intently and wondering whether anyone present was listening to them.

PBS originally planned the listening tour to get feedback from local affiliates, donors and content contributors.  But the tour has been co-opted by the contretemps surrounding WNET, which announced in December that it would move documentary showcases Independent Lens and POV from 10 p.m. Mondays on Thirteen, its New York signal, to the same time slot on its smaller Long Island station, WLIW/21.

It would air reruns of the doc showcases Sundays at 11 p.m. on Thirteen. The Monday prime-time slot on Thirteen would feature reruns of WNET’s in-house arts programming.

Filmmakers protested the proposed change, and WNET agreed to postpone the move for four months. Attendees at the Monday event, many of them filmmakers, explained why a second-tier slot on Thirteen amounted to more than just a readjustment of the station’s menu of offerings.

“When we have a film on PBS, we have to raise the money for that film,” said longtime doc producer Cal Skaggs. “Where you put them impacts how we can raise that money.” 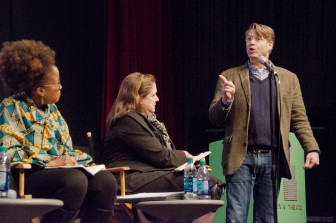 “This is a symptom,” said director and POV veteran Whitney Dow. Dow took a swipe at what he called PBS’s “branding issue,” pointing to PBS’s website, which plays up ratings monster Downton Abbey rather than the original content available on POV and Independent Lens.

Doc producer Abigail Disney, touching on another sensitive issue, voiced an accusation echoed by several other speakers — that New York City’s prime public TV outlet is not representing the city’s diverse public. “There’s a one-percenter problem reflected on the board of WNET,” she said to applause.

“We have to be clear about our unwavering opposition to moving Independent Lens and POV,” said filmmaker Stanley Nelson, whose upcoming film The Black Panthers: Vanguard of a Revolution will be part of PBS’s fledgling effort to support theatrical releases of films on its broadcast schedule.

But Disney complimented WNET VP of Programming Stephen Segaller “for being willing to sit here for two hours and have his ass kicked.” Segaller, who almost looked as if he appreciated the comment, reiterated details of WNET’s “experiment.”

In an interview with Current, Segaller said that “WNET is founded on arts programming. More people donate money to us, both at the board and foundation level, as well as the individual level, for arts programming than anything else. And to see it delivering smaller audiences and getting less attention and marginalized on Friday night is of great concern to us institutionally.”

“Those are the two things we were trying to address,” he said. “We wanted to give Independent Lens and POV a second play at Sunday at 11 when our audience is typically as large or larger than the audience they’re getting at 10 o’clock on Monday.” Moving the programs’ first run to WLIW at PBS’s Monday-night feed time puts them before an audience that “is as large or larger than the 10 o’clock audience on channel Thirteen.”

In both of those cases, he said, the lead-in to Independent Lens and POV would be the Masterpiece franchise, including the hit Downton Abbey, which gets a second run Monday nights on WLIW. “We have the evidence [that] the audience watching those two time periods are larger in aggregate than the audience at channel Thirteen on Monday night,” he said. “We’re not certain, but you only find out one way.”

But among most filmmakers who gathered at the forum, aggregate audience did not seem to be a primary concern. Part of the problem for indie filmmakers in New York is publicity: Will the most coveted outlet, the New York Times, cover a film that’s not on Thirteen at the time of the PBS national feed? The most dreaded words for indies trying to promote their work, said filmmaker Amber Edwards, are “Check local listings.”

PBS, POV, the Independent Television Service and a consortium of filmmakers, the Indie Caucus, presented the listening tour event. Representatives from all organizations sat on stage along with media consultant and public broadcasting vet Mikel Ellcesssor, acting as moderator. About 600 people RSVP’d, according to organizers.

Attendees who RSVP’d to the event were sent a survey, and Ellcessor issued guidelines before the dialogue got started. “We’re in agreement that this work matters, so we’re going to start with that as our understanding,” he said.

PBS news VP Marie Nelson acknowledged, as several in the audience had said, that a “golden age of documentaries” is underway, with many of the best airing on POV and Independent Lens. But filmmakers heard little encouragement that PBS would standardize national scheduling of their documentaries through common carriage.

Under PBS’s business model, local stations pay dues and have autonomy in what they program. “We work for them,” said Beth Hoppe, PBS’s chief programming executive and general manager.

Local programmers essentially think, “You will wrest my schedule out of my cold dead fingers,” Ellcessor said.

The listening tour launched last month in San Francisco and travels to Chicago next month. Judging by Monday’s conversation, a resolution is not at hand.

“It’s very difficult to be up there on stage, trying to maintain relationships while still saying something harsh,” said ITVS President Sally Jo Fifer. Still, she said, she’s optimistic.

“It went about as expected,” said PBS’s Hoppe. The network’s efforts to bolster independent films, including the hiring of Nelson, have “gotten a little bit overshadowed” by WNET’s proposed schedule change, she said. “And that’s too bad.”

A meeting before the forum Monday with about 20 participants was “a little more of a conversation, and I think we are making progress,” Hoppe said. “I totally respect and feel for the filmmakers and their concerns, which are valid, but I’m also really looking toward a more forward-thinking conversation.”

Correction: An earlier version of this article mischaracterized a statement by filmmaker Amber Edwards. Edwards was referring to the difference between a documentary being designated for common carriage and airing outside of common carriage, not the different time slots on WNET’s Thirteen.
ShareTweet EmailPrint More