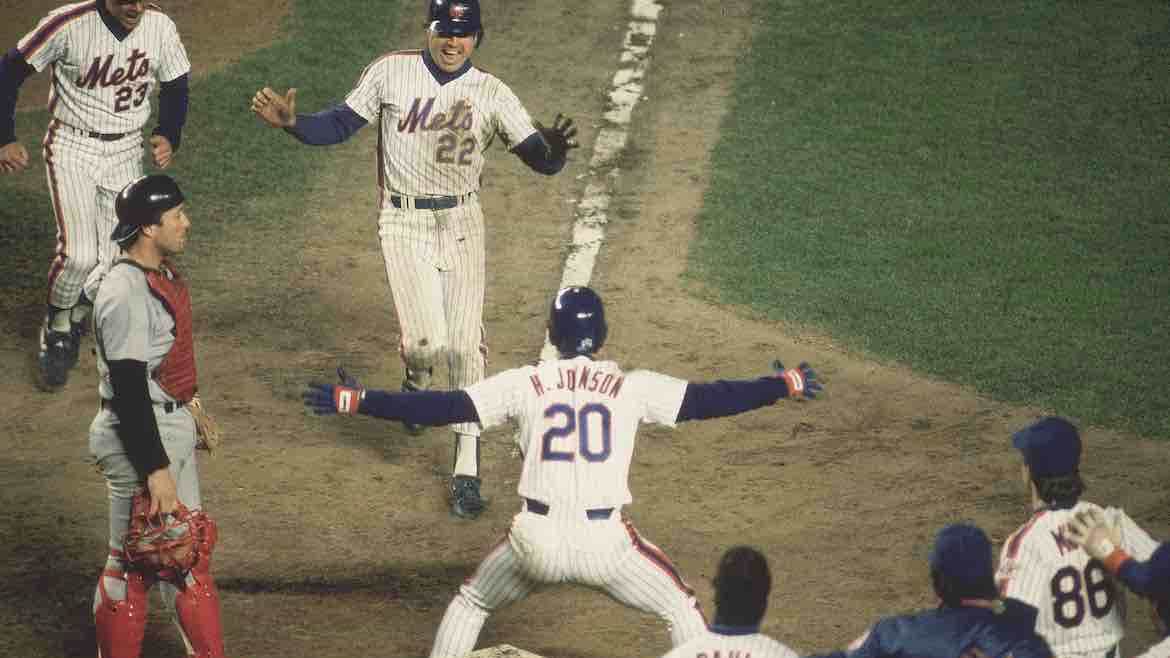 The New York Mets' Ray Knight scores the game-winning run during Game 6 of the 1986 World Series against the Boston Red Sox.

There are a lot of paths to a career making documentaries. Film school is one. Having personal resources that allow you to hire an experienced team of pros — or having unique access to a great story — can set you on your way. Or starting as an intern for an established filmmaker and working your way up the ladder. And then there’s making your first film because you just want to.

Watching the sixth game of the 1986 World Series in ESPN’s Once Upon a Time in Queens, a 30 for 30 series about the New York Mets that year, I suddenly remembered how important that weekend was for my career.

I wasn’t far along any of those paths back then, but I had big ambitions. The day before that game I had a chance meeting with Henry Hampton, the groundbreaking producer of PBS’ landmark Eyes on the Prize civil rights series. It changed my life as a documentary filmmaker.

I’d just finished a second micro-budget film about the 1985 New Orleans mayoral election, one of the first big city races where both leading contenders were African American. Somehow, I’d convinced myself that PBS’ Frontline series, up at WGBH in Boston, was interested in the film. It would be my big break. In retrospect, while it was an OK effort, there was no way it would fit anywhere within Frontline’s format.

I flew up to Boston on Friday, Oct. 24, and arrived at WGBH for my triumphant meeting, even though I hadn’t been invited. A woman from the Frontline office came out and met me in the lobby. She couldn’t say “No, thank you” quickly enough.

So there I was — the rest of a day ahead of me, with nothing to do or to show for the flight. Then I remembered a short supportive letter about my New Orleans film that I’d received from a Boston producer who was making a series about the civil rights movement. He and I had similar interests in African American politics. His name was Henry Hampton.

My professional skills were not very evolved back then, and I decided to go and meet Henry uninvited. I called a friend who was a student at the New England Conservatory of Music and asked him to give me a ride to the address I had for Blackside Inc., Henry’s production company in Boston’s South End.

My friend, a jazz pianist and a white kid from the Jersey suburbs, was into an Afrocentric period. He pulled up in his car wearing an African patterned shirt, cap and Kente cloth sash over his shoulder.

We parked outside Blackside’s headquarters, climbed the narrow stairs and walked into Henry’s cluttered office. When we introduced ourselves, he kept staring at my friend. But in no time, the three of us were talking music, jazz, politics and history. Somehow, with the first Eyes series nearing completion, Henry had some time to chat. We talked for a long while.

I remember Jim Devinney — a producer on both of the Eyes series, who recently passed away — popping his head into the office. He needed some time with Henry. It was finally time for us to go.

As I got up, Henry looked at me and asked, “Don’t you have a Ph.D. from Harvard?” He said he thought Eyes on the Prize, which would debut on PBS months later, would be a success and there’d be a sequel. I could be an advisor on it, which would involve a couple of free plane trips to Boston.

It sounded like a good offer. But I thought for a second and, out of somewhere, said, “I’d rather help make the films.” Henry looked at me for a few moments and then said, “What an interesting idea.”

‘And then it happened’

A lot has been written by Henry Hampton and his legacy. He was much more than a filmmaker. He was a visionary.

Henry’s dream was to make a history of the civil rights movement that would focus on the people who had made up that movement — mostly regular folks who’d risked their lives, endured beatings and jail time, and experienced the triumphs and tragedies firsthand. It would truly be a people’s history.

As Henry later said, he wanted to get away from the usual depictions of Black Americans as “poor, downtrodden and brutalized primitives.” He wanted to show that “it was the strength of Blacks that made the civil rights movement happen, with support from some whites.” It would be their story.

Producing a documentary series about the civil rights movement in this country would seem to be the most logical of projects for public television. But back in the late 1970s, that logic was only clear to Henry. It took him 10 years of fundraising and false starts to raise the money he needed for that first Eyes series. A charismatic man who was always the center of any gathering, he never despaired. He never took rejection personally, he said. Someday, sometime, the people who were not willing to help now might do so later, and they’d probably forget their earlier rejection. And he was right.

I remember the date of my first meeting with Henry — Oct. 24, 1986 — because the very next night, the Boston Red Sox were in New York, with a 3-2 lead in their series against the Mets. This game is the pivotal high point in the ESPN film, and I remember exactly where I was when I watched it.

I’d gone to a friend’s house in Somerville, just outside of Boston, to watch the game in a living room packed with Sox fans. I think I was the only Mets fan. In the 10th inning, the Mets, trailing by two runs with no one on base, were down to their last out.

For the Mets team of Dwight Gooden, Darryl Strawberry, Keith Hernandez, Gary Carter and Mookie Wilson — winners of 108 games that season — this wasn’t supposed to be the way it ended. But the Sox hadn’t won the World Series since 1917, when Babe Ruth was on the pitching mound. I sat in a corner, accepting that this end was justification for the Red Sox’s long years of futility.

And then it happened. A hit, another hit, another hit, a wild pitch — and finally a slow roller through first baseman Bill Buckner’s legs. The living room went totally silent, then people began to just get up and leave. I heard someone crying outside. The Mets took Game 7 a couple of nights later.

Henry and I kept in touch and, a year later, he called me at my parent’s house, where my Dad was slowly dying of Lou Gehrig’s disease. Henry made me an offer to join the sequel Eyes on the Prize II series as a producer. I accepted and moved back to Boston, where I helped make two of the films with veteran filmmaker Jacqueline Shearer.

When Henry called, I was unemployed and living in New Orleans with no money for another film, no prospects at all. Everything changed after that.

If I hadn’t had delusions about Frontline that had been turned down so quickly, if I hadn’t thought it was a good idea just to drive over to Blackside, and if Henry hadn’t been in his office and willing to take time to talk, I wouldn’t be writing this today.

Henry had an amazing ability to see what people who didn’t have direct experience in making documentary films might be able to accomplish. His commitment to hiring African Americans to make films — especially people who had not had opportunities to produce before — was central to his vision. He convinced inexperienced filmmakers, including me, that we could turn one of the most important moments in American history into sensitive, complex, emotionally compelling narratives and introduce a national audience to a cast of characters — grassroots activists, firebrands, plain folk and iconic civil rights leaders — most of whom they’d never heard of, some they really only knew as symbols.

These many years since Henry passed away, his legacy lives on in the many filmmakers who worked on his documentaries. Search online for people who got their big breaks from Henry, and you’ll find their films, books and the universities where they’re in leadership roles. Eyes alumni include filmmakers like Sam Pollard, Callie Crossley and Orlando Bagwell, among many others.  Even more filmmakers got their starts on Henry’s subsequent films on subjects like the Great Depression and the Great Society.

Since working on Eyes, I’ve been lucky to make films about American politics for three decades, but the doors that opened for me were only because of my association with Henry’s masterpiece. And after many years helping to run the University of Texas’ film program, I look at our student population that mirrors our state’s Latino-plurality population and hope that we’re doing our part to help fulfill Henry’s dream to make the film world as diverse and open as it should be.

I last saw Henry at the PBS national meeting in Miami 23 years ago. We were in a hotel hallway, talking with my longtime collaborators Louis Alvarez and Andy Kolker, whose work Henry loved. We joked about future film ideas until Henry had to go off to give a keynote speech.

I remember him moving down the hallway slowly. As a teenager Henry had contracted polio; he relearned how to walk by wearing heavy leg braces, which he used for much longer than I’d known him. I noticed that his walk had grown more labored, the result of chemotherapy for lung cancer. Henry was tired and looked a lot older than when I’d first met him, but when he smiled, the light in him still shone.

Henry was ever the optimist — in his life, in his films, in the country that he truly loved, for what it was and for what it could be. And for what people of good will can accomplish, if given the opportunity.

Paul Stekler’s films about American politics include George Wallace: Settin’ the Woods on Fire, an American Experience documentary that won a special jury prize at the Sundance Film Festival; Vote for Me: Politics in America, a 1996 PBS series; and two films, co-produced with Jacqueline Shearer, in the Eyes on the Prize II series. He’s now working on Politicos, a partly retrospective film about American politics, with longtime collaborators Louis Alvarez and Andrew Kolker.

One thought on “How serendipity, the 1986 World Series and believing in possibilities changed my filmmaking career”