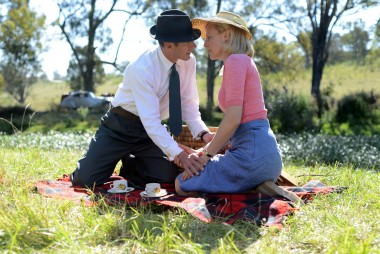 A Place to Call Home, a top vote-getter among American Public Television offerings, centers on enigmatic nurse Sarah Adams (Marta Dusseldorp) as she returns to her native Australia after two decades in Europe and becomes involved in the lives of the Blighs, a wealthy ranching family. (Photo: APT)

Programmers have pored through American Public Television’s latest content offerings, and cult favorite Mystery Science Theater 3000 will be coming to public TV for the first time.

APT showcased 75 program offerings in November 2014 during its annual Fall Marketplace in San Diego. Attendees, including more than 200 programmers and other station executives, got a first look at new trailers from longtime favorites (Rick Steves’ travelogues) as well as first-time previews.

For the first time, this Marketplace featured online voting. Participants had six weeks to choose what they would most likely schedule for local viewers. After they voted, APT contracted with producers for the programs that generated the most interest.

Viewers go behind the scenes for Doc Martin’s Portwenn and hear an interview with star Martin Clunes. (Photo: APT)

In Syndication Service offerings — dramas, comedies, documentaries, film packages and other specials — Doc Martin’s Portwenn, a new hourlong behind-the-scenes special, was a top vote-getter, according to APT spokesperson Jamie Haines. In addition to interviews with cast members of the quirky British drama, viewers can see rehearsal and filming sequences contrasted with the finished scenes.

While created as a pledge event, the show “really is a new program in the Doc Martin franchise,” Haines said. “For markets where the series has been picked up, it provides another opportunity to deliver more aspects of what engages the viewers.”

Other popular programs included A Place to Call Home, a 13-part series set in 1953 in rough and rural Australia — sort of an updated Outback Downton Abbey. The romantic drama from the Seven Network in Australia debuted there in April 2013 and went on to win the 2014 TV Drama & Mini Series Award from the Australian Cinematographers Society. Following World War II, Sarah Adams, an Aussie nurse with a mysterious past, returns after years abroad and becomes involved in the lives of the Blighs, a wealthy ranching family with secrets of its own.

Longtime favorites still pulling in votes after multiple years on the air include the ninth season of Midsomer Murders (along with an associated pledge package), from All3Media Group for ITV, and the fifth season of Vera, a detective series starring Oscar nominee Brenda Blethyn, from ITV Studios.

Programmers get four episodes of MST3K, as fans call Mystery Science Theater 3000, in what APT hopes will become The Best of MST3K on PTV. Broadcasters also have digital rights for streaming online. The episodes, which run from 94-97 minutes, will be edited to 88 minutes to conform to public TV schedules. Los Angeles distributor Shout! Factory holds the TV rights.

Stand-alones include A Wing and a Prayer, about a former U.S. Air Transport Command flight engineer’s audacious plan to arm Jews trapped in Palestine after the United Nations partitioned the region in in 1947; and Queen of Swing, a documentary 15 years in the making telling the story of jazz-age trailblazer Norma Miller, now 95, who pioneered the acrobatic Lindy Hop dance.