KUT Public Radio in Austin, Texas, is spearheading an ambitious project bringing together public radio stations across the state to tell local, national and international stories from a Texan perspective.

Texas Standard is a new daily hourlong newsmagazine produced by KUT in collaboration with KERA in Dallas, Houston Public Media and Texas Public Radio in San Antonio. News organizations such as the nonprofit Texas Tribune website and Texas Monthly magazine are also participating. 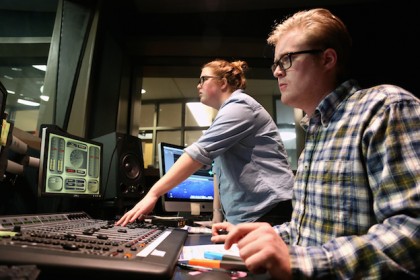 But when Texas Standard debuts statewide March 2 — Texas Independence Day — Texans will for the first time have a daily public radio news program dedicated to covering stories that matter to Texans, Brown said.

“There’s a genuine hunger here in Texas — and not just in Austin but all around Texas — for a program that prioritizes the stories in a way that is consistent with the way that we see the world,” said Brown.

“We see Texas Standard as a collaboration among stations within Texas, as a Texas platform for stories that are coming out of communities all over Texas but have impact on residents beyond the community in which the story is taking place,” said Stewart Vanderwilt, KUT g.m. “It’ll serve that role for our state similar to how Morning Edition serves that role for the country.”

But Texas Standard isn’t limited to covering news happening within the Texas border. A Jan. 9 broadcast of the show on KUT’s all-news station featured updates on the hostage crisis in Paris along with Texas-focused stories on the state’s high rate of deaths from child abuse and neglect, and a lawmaker interested in reducing the punishment for marijuana possession. Listeners also heard about topics trending on social media throughout the state.

Thirteen years in the making

Vanderwilt conceived the idea of a signature show for KUT as far back as 2002, when the station first created a news division. “When I got here, one of the very first things that [Vanderwilt] said was, ‘We’re going to have a program,’” recalled Emily Donahue, news director and Texas Standard e.p. “This is the program, 13 or 14 years later.”

But KUT only recently found room for a new newsmagazine on its airwaves. In 2012, it acquired a second FM frequency that allowed it to split its news and music formats across two stations.

Starting last fall, KUT began posting demos of Texas Standard on SoundCloud, and in January the show debuted on KUT as a weekly production. Next month the show ramps up to daily production on KUT, prepping for statewide launch in March. 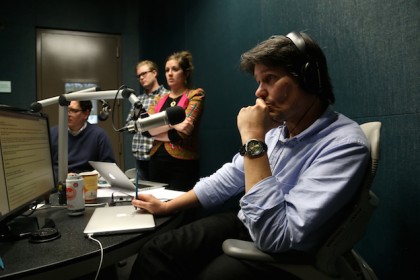 “We started slowly because we wanted to test capacity both editorially, with the very small staff we started with, but also technically,” Donahue said.

“We’re using the time that we’re broadcasting locally to try out signature segments and try out whole parts of the show and see if they work,” she said. “When we hit statewide, we will be a polished, well-oiled machine.”

Though KUT is taking the lead on producing Texas Standard, collaborations with other public radio stations and media outlets in the state will be key to its success. Vanderwilt described coverage of the recent Ebola incident in Dallas as an example of how that could work.

“We would pull in material from KERA, and they would be the go-to source for that material,” he said. “Then Texas Standard would be the way to share that reporting across the state. What [audiences] would hear on Texas Standard may be deeper and have more direct connections to Texas than the material that’s going to end up on Morning Edition. They’re complementary but also distinctive.”

Rick Holter, VP of news at KERA, said that he’s excited about the show because it will give his station’s journalism a broader statewide platform. “This state is so big and so diverse and such a rich well of journalism and stories that something like this makes perfect sense,” he said.

Details of the collaborative process are still a work in progress, Holter said. However, a point person at KERA will be in “daily or sometimes hourly contact” with the Texas Standard team.

But the show’s wide geographic reach could also complicate production. “One of the interesting challenges of the show is going to be how do you knit this all together in a way that makes sense but also doesn’t feel contrived,” Holter said. “The issues of concern for people in El Paso are pretty different from the issues of concern to people in Tyler or Commerce or somewhere in East Texas.”

Though KUT is paying for the production of Texas Standard, collaborating stations will make significant contributions of other kinds, according to Vanderwilt. In addition to providing content, they will share studios, making it easy to book guests on the show without needing them to travel to Austin or resort to a phone line.

The stations’ willingness to carry the show also plays a major part in its success, Vanderwilt said. “Their carriage is what makes it possible to seek and place a statewide sponsorship into the show,” a goal for the program, he said. “The network sponsorship is what will support the show, and so their carriage … is a critical investment.”

KUT expects to spend $700,000 on Texas Standard this fiscal year as it adds staff and upgrades production facilities. “The challenges of putting on a one-hour daily are well known to anyone who has put on a one-hour daily,” Donahue said. “We’re aware that we are trying to produce a national-caliber show with what is essentially a local station budget.”

Brown and Donahue were the first staff members to join Texas Standard, starting in June 2013. Donahue had served as news director of KUT’s news station, and Brown was working on Texas Music Matters, which aired on both KUT and KUTX. Since then, the show has added two staff members from KUT News, two from KUTX and three new hires for production jobs.

“You’re not going to do a daily show with two people, so we built up that staff to the level that we feel is adequate for launch, but probably over time will grow,” Vanderwilt said. “We just don’t know . . . if that growth will take place here or, as the collaboration develops, if that growth may take place with our station partners across the state. . . . We’ll know more about that in a year.” 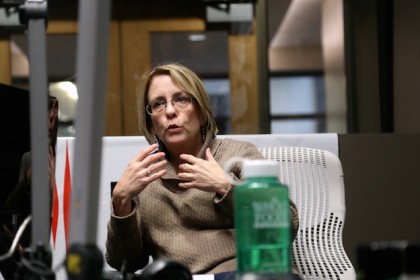 KUT is also building a studio dedicated to Texas Standard. In addition to drawing on existing funds, the station has received grants, and it aims to attract corporate sponsors and seek additional grants for areas of coverage.

Looking to the future, Donahue would like to see collaboration with stations in bordering states. “What I’d like it to be is such a good show, and of such interest, that stations along the border want to carry it, in New Orleans or other states,” she said. “But that’s well down the road. That’s not our priority — our priority is Texas audiences.”

Brown’s vision is even bigger.

“That agenda was largely driven by white dudes in New York and Washington, no doubt,” he said. “But we were all kind of on the same page, and it created this sense of shared, not community, but something kind of close to it: a sense of identity.”

Listen to the show’s Jan. 23 episode:

Correction: An earlier version of this story referred to KUT 90.5 as KUT News. KUT News is the station’s news department.