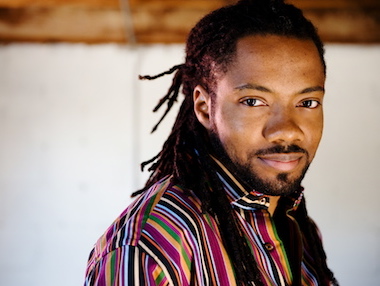 Al Letson, the performance artist and playwright behind public radio’s State of the Re:Union, begins 2014 with a new production partner, renewed funding and ambitions to take his show into weekly production.

The series, which has delivered 40 episodes since its 2010 debut, was created and launched through the Public Radio Talent Quest, a CPB-backed initiative that in 2008 provided funding and support for new talents to create their own series.

Letson and Olkowski’s teamwork in reporting on the racial dynamics of a small Ohio town resulted in the award-winning “As Black As We Wish to Be.” (Photo: Lloyd Cederstrand)

Though SOTRU has struggled to build audience and sustainable revenues, it has garnered acclaim, particularly for standout pieces such as “The Hospital Always Wins,” produced by staff producer Laura Starecheski. The Nieman Foundation at Harvard recently cited it as among the best narrative journalism stories of 2013. “As Black as We Wish to Be,” a 2012 story by Lu Olkowski, won several prestigious journalism prizes last year, including a national Edward R. Murrow Award from the Radio Television Digital News Association. It had been cited in Nieman’s inaugural best-of list for 2012.

After working as an independent producer to launch SOTRU into national distribution, Letson forged a partnership with WJCT in Jacksonville, Fla., last fall. The dual licensee pubcaster is absorbing SOTRU’s production and taking on responsibility for the program’s fundraising.

The recognition and administrative support come at a key moment for Letson, one of the two Talent Questers whose program continues to air in national distribution. Snap Judgment, a weekly show featuring Glynn Washington, is going strong, airing on 280 stations as an NPR-produced and distributed show. The Promised Land, which featured host Majora Carter interviewing community activists, produced 16 episodes and won a Peabody Award, but its CPB funding ended in 2011.

Like Carter’s show, which was distributed through American Public Media, SOTRU has been produced as a series of occasional specials. Letson hopes to step it up to weekly production, but nothing firm is planned.

Letson knew little about producing radio when CPB announced that his proposed show would be developed for broadcast. He stumbled onto the contest while searching online for the latest American Idol results. He had no journalism background, nor had he ever produced a radio story. But that didn’t stop Letson, who had already won acclaim as a slam poet performing on national, regional and local stages, including HBO’s Def Poetry Jam. His solo show, Summer in Sanctuary, opened Off-Broadway in 2011. He later adapted it as a SOTRU special for American Graduate, the CPB initiative responding to high dropout rates among high-school students.

Not long ago, Letson listened to the audio piece that he submitted for the Talent Quest. “It was horrible,” he said. “The show has evolved a lot since the first season; I didn’t know what I was doing in the first episode.”

Public Radio Exchange helped Letson navigate the R&D and production process and now co-distributes SOTRU with NPR. PRX also paired the budding show host with producer Taki Telonidis, who remains involved as a content and story editor. “Taki listened to my idea and taught me how to turn it into radio,” Letson said.

Letson conceived of SOTRU as a series of in-depth, compelling stories exploring communities and how they are connected. The idea derived from his nine years of working as a flight attendant.

“He wanted to focus on how individuals worked together to solve problems,” said John Barth, PRX managing director. Initially Letson’s stories centered on geographical communities, such as an early episode about “a town in Kansas that got wiped out by a tornado,” Barth said. Letson reported on how townspeople came together to rebuild their community, yet were divided by conflicting visions.

Midway through SOTRU’s fourth season, Letson has expanded the concept of community.

“A year or two ago, I realized ‘community’ doesn’t have to be just geography,” Letson said. “This season we have a story about one person’s journey through mental illness. I’m always looking for a way to do the show that we haven’t done before.”

Barth points to an episode on a community of “people deeply involved in comics and anime” and “great work” that Letson has done in reporting on military veterans.

While SOTRU appears to be going strong, the broadcast carriage has declined since its national debut, said Israel Smith, NPR’s director of programming. Preliminary carriage data collected by NPR last fall confirmed broadcast on 163 stations. NPR offers the series free of charge to local stations, so cost was not a factor.

In terms of national carriage, “the all-time high was in the early going of the show,” Smith said. “Hot off the heels of the Talent Quest, it was somewhere around 250.” He attributes the carriage decline to SOTRU’s seasonal production output, which makes it difficult to secure regular timeslots on local stations.

SOTRU’s success, and that of other Talent Quest shows, lies in the emergence of public radio’s weekend storytelling block, featuring Letson among other fresh young talent, Smith said.

Both Snap Judgment and SOTRU have changed the way pubradio stations program their weekends, Smith said. “There’s a whole new focus on storytelling and personal narratives that connect with listeners. Stations now talk about their storytelling blocks.”

“The language I use is the ‘new modern weekend sound,’” Smith says. “Having two new significant shows coming out of the Talent Quest made that happen.”

SOTRU’s six-member staff produces 10 to 12 episodes per season, each an hour long but generally broken into four or five stories organized around a theme. For most shows, the team spends two or three months researching the theme and then a week or so in the field producing pieces.

Letson departed from that formula for two of SOTRU’s most acclaimed pieces, including Starecheski’s “The Hospital Always Wins,” the hourlong piece the Nieman Foundation cited as one of the best 2013 narrative audio stories. Starecheski spent 10 years reporting it as a personal project, profiling an inmate who is struggling to be released from a mental institution. Letson pushed her to put it on the air.

Earlier, Letson teamed up with independent producer Olkowski for “As Black as We Wish to Be,” about white-skinned individuals living in southern Ohio who self-identify as African-American. Their collaborative reporting method was so successful that Letson would like to work this way more often.

Olkowski stumbled on the story of East Jackson, Ohio, a small town in Appalachia whose population has mixed racially for over a century. Residents trace their combined ancestry to Africa, Ireland, Germany and Native American tribes; they now have white skin, yet some still self-identify as African American. Olkowski traveled to Ohio several times to explore the racial relations and tensions that affect the community, interviewing more than two dozen people.

“People got really comfortable with her in a way that we couldn’t have done,” Letson said, referring to SOTRU’s typical production process.

Olkowski reported the story over the course of a year and used material from 13 of her 26 recorded interviews to produce the hourlong program. “Thank God for grant funding and being nimble and super cheap,” she said. “I went back five times, and Al came on my last trip, when we kind of knew what the stories were, to get his own handle on the story.

“The great thing I see about SOTRU is this crazy willingness to try new things and really collaborate with people,” Olkowski said.

As Letson looks to the future, he wants to work with more independent producers and expand into weekly production. For now, he’s exploring the benefits of working with his new partner, WJCT.

Letson reached out to the pubcasting station in his hometown as he sought a new home and a funding renewal for SOTRU.

CPB encouraged him to seek a station partner with ambitions to produce a national program, according to Bruce Theriault, senior v.p. for radio. “Al brought in WJCT. The top leadership there started saying they wanted to get more involved in the community. They started thinking how they could bring Al in.”

Karen Feagins, WJCT program and news director, recognized the opportunity to work with Letson. “Al is a treasure,” she said. “Anyone who has heard one of his programs or seen him in person knows that he has it — whatever ‘it’ is — that makes people want to listen to every word he says. He’s so full of ideas.”

She also wanted to ensure that Jacksonville didn’t lose Letson.

“He had offers from other stations,” she said. “That would have kept SOTRU going, but he really is a pillar of our arts community in Jacksonville. He’s a well-known playwright. For WJCT, it was really important to keep that asset in Jacksonville.”

With support from Feagins and WJCT content and operations chief Anthony Padgett, Letson secured a two-year, $600,000 CPB grant backing the new production partnership. During the first year, WJCT received $400,000 to support SOTRU; the remaining $200,000 covers the following year. Then WJCT and Letson must secure funds from elsewhere to sustain the show.

Since providing its first grant backing research and development of SOTRU, CPB has awarded SOTRU a total of $2.3 million to the show, believing that Letson will succeed in establishing it as a public radio mainstay.

“At some point with CPB money, you have to let whatever is going to happen, happen,” said Theriault. “The resources aren’t there for us to adopt a program. Then you don’t have money for new things.”

Being absorbed into WJCT has been a relief to Letson, freeing him up to focus on new content and eliminating the continuous pressures of scrounging for money.

Previously, Letson and Brie Burge, who doubles as Letson’s part-time business manager and associate producer, were constantly fundraising. “Me and my business partner were going out and hustling,” said Letson. “We got support from individuals and family foundations. We actually did a successful Kickstarter campaign. Everything we needed to fill the gaps we raised on our own.”

But now, with WJCT providing back-end support to SOTRU, Letson is stepping up his profile as a homegrown pubradio talent. Each weekend he hosts Freestyle: A Mixtape With Al Letson, an original broadcast combining storytelling, podcasts and other public radio content, Feagins said.

“We consider it a best-of-public-radio show.”