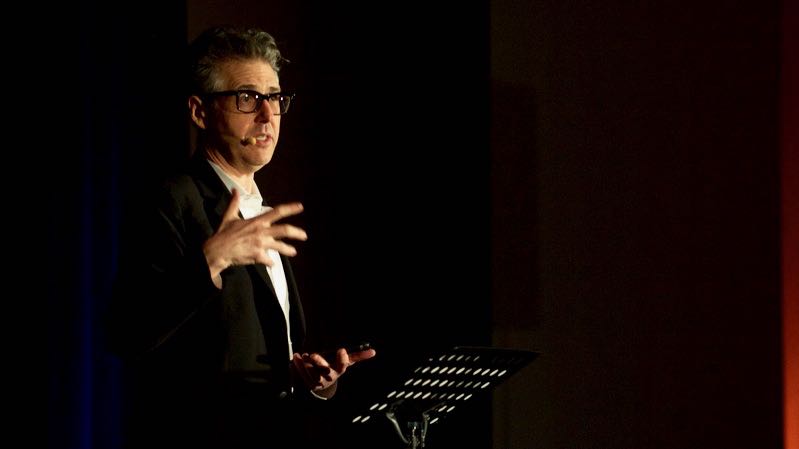 Ira Glass discussed "how much non-factual material is out there" at the Third Coast International Audio Festival in Chicago Saturday.

CHICAGO — Public radio and nonprofit journalists on a panel at the Third Coast International Audio Festival Friday expressed concern and frustration about the state of media and the U.S. a year into the Donald Trump era.

Reveal host Al Letson did not hold back: “I think where we are as a country, we’re in deep shit.” He said that after the election, he felt “like everything that my show … had done had been kind of a waste of time.”

The session, titled “Mudslide Part 2: After the Avalanche,” followed up on an at times contentious panel discussion at last year’s Third Coast that featured journalists grappling with the results of the election. On the Media host Bob Garfield blamed Trump’s victory in part on journalists failing “to persuasively explain shit to folks.”

“If a journalist doesn’t know well enough to push back … , then the audience walks away not quite sure what’s what.” — Al Letson, Reveal

A year later, journalists have moved from “self-flagellation” to a feeling of empowerment, said Leital Molad, EP of the First Look Media podcast Intercepted. Working for a progressive nonprofit organization, “there’s an intensity, and I think there’s an urgency, and that empowers what we’re doing,” she said.

Letson said he’s now in a more “nuanced place” and believes that “absolutely, the work that we did mattered. It’s our job to go out and tell the truth.” The change in thinking came from a feeling of wanting to “control the narrative that’s running through me.”

“I feel like I am now always angry, and the way I have to channel that anger, because I don’t want to walk through the world with that weighing on me, … is through the work,” Letson said.

Panel moderator Kai Wright, an editor and host at WNYC in New York City, said he felt similarly frustrated during the George W. Bush presidency when the U.S. started the Iraq War. “After we went to war despite all of the reporting … I really was ready to quit journalism,” he said. “I felt like, what’s the point? The truth was out, and it didn’t matter.”

After the election, there was a premise that “we don’t get out of our media bubbles,” Wright said, which inspired a lot of journalism over the past year. “Our call to action was to inspire conversation across experiences,” he said.

But Wright said he has struggled with that premise as host of the WNYC podcast United States of Anxiety, which profiles “cultural warriors” shaping America’s political scene. “It took several weeks before I could figure out why I was doing this and whether or not it was useful,” he said.” … I struggled with not everybody [entering] that discourse equally and with the same thing at stake.”

When United States of Anxiety produced a special call-in radio series after the election, the show’s staff considered putting people on the phone together who held opposing beliefs. That made Wright anxious. “I thought, ‘What happens when there’s a trans woman calling and there’s somebody saying ‘I don’t believe in trans people?’ That’s not an equal conversation.” 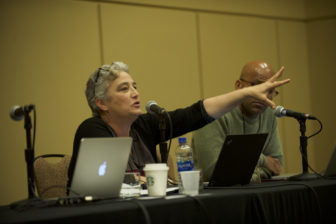 “Civil discourse doesn’t mean you can’t ask the tough questions or call people out,” said Epstein, formerly EP of Think Out Loud, an Oregon Public Broadcasting show that aims to get people with differing views to listen to each other. “It just means you have to talk from a place of respect.”

But fostering civil discourse in the current political climate is difficult because “we can’t agree on the facts,” Epstein said.

There’s an “alternate universe out there” when it comes to facts that are “quite clear to many of us,” Epstein said. “That’s what I find to be completely disorienting about this time that we’re in.”

Too many journalists don’t do enough to challenge a falsehood, Letson said. “They don’t say, ‘That’s not true, that’s not true,’” he said. “… If a journalist doesn’t know well enough to push back …, then the audience walks away not quite sure what’s what.”

Speaking at the conference’s closing session, This American Life host Ira Glass echoed concerns over “how much non-factual material is out there.”

“This president, like President Obama, will be out of office some day,” Glass said. “But this information ecosystem, this is going to be around for the rest of our lives. And I find that more alarming than any particular policy or politician or anything that’s happening right now.”

Podcasting, though, is uniquely positioned to bridge political divides because “you can get people to listen to a podcast who aren’t necessarily engaging with the mainstream media in other ways,” Glass said.

“I feel like there’s an opportunity there in some way to reach people,” Glass said. “In this room, we have the ability to try to make a future. Exactly what to do with that, I don’t know.”