Al Letson, host of the Center for Investigative Reporting’s Reveal, threw himself on a man during an anti-hate protest in Berkeley, Calif., Sunday to protect him from a beating. 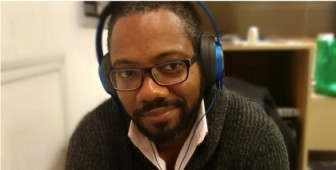 “I was scared they were going to kill him,” Letson told Reveal’s blog. “So the only thing I could think was I wanted to get on top of him to protect him.”

Downtown Berkeley was packed with people assembling to counter a planned right-wing rally, though organizers had canceled the rally Saturday. Police arrived to break up clashes between left and right-wing groups among the crowd of thousands, according to Reveal.

Letson was covering the anti-hate rally with CIR colleagues. Videos show conflict at the event escalated when right-wing organizer Joey Gibson showed up and was chased by other demonstrators:

“Meanwhile, Letson said, a man who appeared to be one of Gibson’s supporters was also chased by 20 to 30 [antifascist] protesters, who began to kick and hit him with sticks,” according to Reveal. Letson then intervened to help the man.

If the man was indeed a member of the alt-right, Letson was keeping true to the words and views he shares on Reveal. He saw the humanity of another person, even one hostile to people of color.

omg that's @Al_Letson jumping in between the attackers & the man on the floor.

Al is a big believer in being a human 1st, journalist 2nd. https://t.co/IKioH1AQAz

My brother @Al_Letson has the kind of character that would have him out here sacrificing himself for someone who wouldn't do the same 4 him. https://t.co/zYeIUyQ1Um

The situation was chaotic. Watch the moment when Letson stepped in:

A longer video shows the scene before and after Letson entered the fracas:

Someone dives on top of another guy being beaten by Antifa, begging them to stop, fleeing behind police lines. Intra-left blows exchanged. pic.twitter.com/bz2zFEB25j

For most, that good deed would be enough for a day. Not for Letson, who posted to Instagram that he helped an elderly woman escape the protest and shop for groceries. Letson got them a Lyft and helped the woman put away her groceries.

“She told me she has no one, but she has God,” Letson wrote. “Her family’s abandoned her, but the lord sent me to her. I think it’s the other way around. She’s exactly what I needed.”

For Letson, also a playwright and comic-book author, it’s all in a day’s work.

I met Ms. Alberta at the protest in downtown Berkeley that I’m covering, there was so many ppl she was getting knocked around, so she took my arm, and we walked to the store. Slowly. Did her shopping, I got her a Lyft and we headed to her house to help her put her groceries up. She told me she has no one, but she has God. Her family’s abandoned her, but the lord sent me to her. I think it’s the other way around. She’s exactly what I needed. Watching all the strife and sadness in this world, Alberta had this peace and it just rubbed off on me. I walked back into the madness singing Kendrick “I’m f*cked up, homie you f*cked up, but if God got us then we gonna be alright!”

Reveal produced a special episode about the protest.