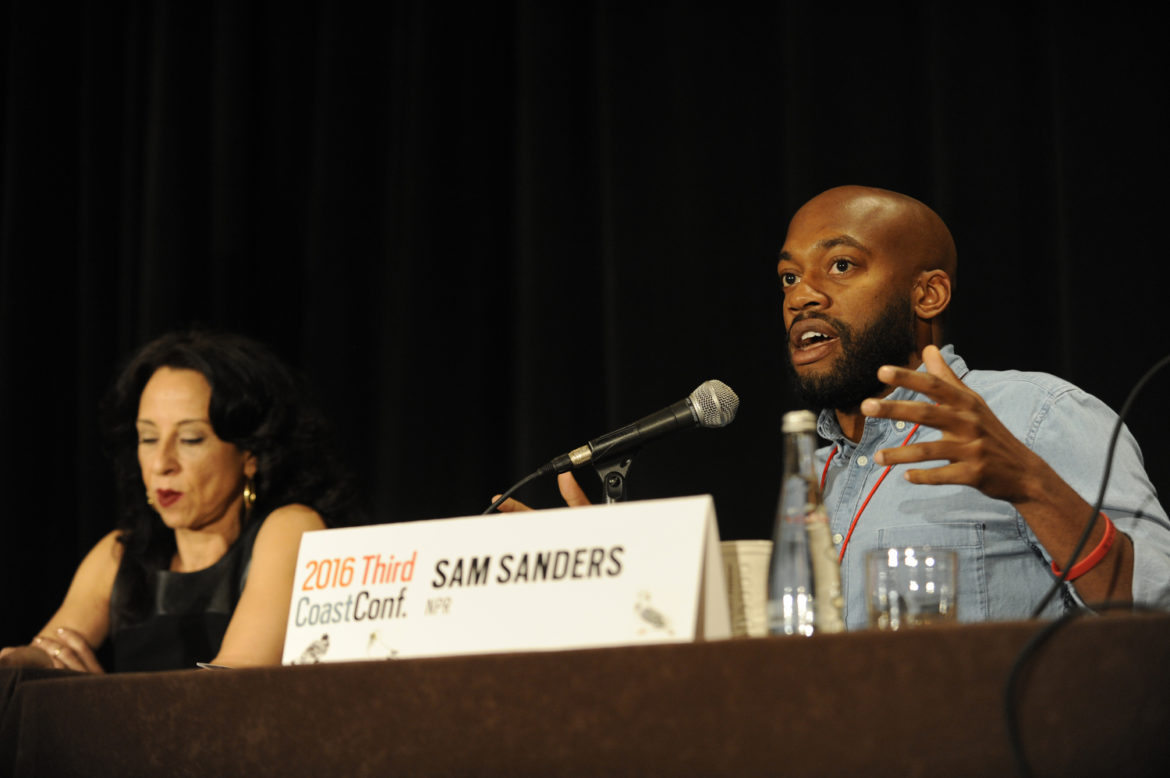 “The set of voices the media missed the most during the election were ‘unenthusiastic Democrats,’” NPR Politics reporter Sam Sanders said at Third Coast. (Photos: Bill Healy/Third Coast Audio Festival)"

The voices the media most overlooked in its election coverage were those of ”unenthusiastic Democrats,” NPR Politics reporter Sam Sanders said at Third Coast. (Photos: Bill Healy/Third Coast Audio Festival)

CHICAGO — Only days after the presidential election, four of public radio’s most high-profile political journalists convened Saturday for a raucous, often contentious discussion of their election coverage strategies, trying to point to a way forward for public media in a divided country.

In piecing together the aftermath of the surprising election of Donald Trump, panel moderator Bob Garfield didn’t mince words: “The media share the blame,” the host of WNYC’s On the Media declared. Among other reasons, Garfield said, journalists writ large “failed to persuasively explain shit to folks.”

Garfield challenged his other panelists — NPR politics reporter Sam Sanders, Latino USA host and Futuro Media Group president Maria Hinojosa and This American Life reporter Zoe Chace — to figure out how to cover a country that suddenly looked very different from how it appeared before Tuesday. “How can we do the job of reporting truth without being dismissed as polemicists?” he said.

The panel, titled “Mudslide: The Election of 2016,” took place at the Third Coast International Audio Festival conference. (Listen to a full recording of the panel here.) It had been on Third Coast’s schedule before the election and was originally planned to examine “a year’s worth of stories from the campaign trail.”

But in the shadow of the week’s events, the 90-minute talk became more of a mea culpa and communal therapy session. “I am five things that the president-elect does not like,” Hinojosa said. “I’m Mexican. I’m an immigrant. I’m a woman. I’m a journalist. I’m flat-chested.”

Panelists admitted to being blindsided by the results. On election night, Chace appeared on another panel to discuss what Republicans would do after the campaign. “That became irrelevant 45 minutes later,” she said. Her boss, Ira Glass, had been scheduled to attend Third Coast but pulled out to overhaul the week’s TAL episode in the wake of the results.

“We don’t have the right people in the office, and I think that’s a big problem. A lot of people in these offices went to the same college.” — Zoe Chace

Everyone had a list of diagnoses. “We did not understand the level of unenthusiasm that existed among traditionally Democratic voting blocs,” Sanders said, a sentiment the room generally agreed with. Chace noted that she had “outsourced” her gathering of predictive polls to outlets that focus on polling, such as FiveThirtyEight, and most of those polls ultimately framed a misleading narrative that showed Hillary Clinton with a comfortable lead.

And all of the panelists agreed that a continued lack of both racial and class diversity in newsrooms hindered outlets’ abilities to find broader, uncovered election stories.

“We don’t have the right people in the office, and I think that’s a big problem,” Chace said. “A lot of people in these offices went to the same college.”

Garfield took the diversity question a step further when he asked the room of more than 700 audio professionals to stand up if they self-identified as “liberal” or “progressive.” Almost the entire room stood. Some, once standing, walked out of the room.

In a country with such a polarized media scene, public media is “already not being heard by approximately 50 percent of the potential audience,” Garfield said. He returned several times to the question of how to reach the half of the country that has written off public radio because of what they perceive as bias.

When someone comes up to Sanders in the field and accuses NPR of being biased, “I ask them a question back,” Sanders said. “‘OK, thanks for the feedback. What did you hear that sounded biased?’… I never have an answer to the question that’s like, ‘You’re wrong.’ Because they feel that way, and it needs to be addressed.”

Sanders noted that the tone of the NPR Politics podcast conversations, in which reporters never raise their voices at each other, likely helped attract a large and ideologically diverse audience. He said the show — which released about two new episodes a week throughout campaign season and came out daily in the weeks leading up to Election Day — received letters from Republicans, evangelicals and atheists. One comment came from a Trump supporter who also supported the Black Lives Matter movement.

When discussion turned to what panelists could have done differently and how they should change future coverage, the tone became combative. When Sanders spoke to the necessity to both warn listeners of the unique threats posed by Trump’s presidency while simultaneously remaining open-hearted and compassionate to all voters, Garfield retorted, “How did that work out for you?”

Chace leapt to Sanders’ defense. “That’s not Sam’s job to make the next president,” she said. “We’re covering America. We’re not deciding what America is.”

“I think we mistake loudness for effectiveness sometimes or paranoia for urgency.” — Sam Sanders

And when Garfield probed how journalists should respond to the country’s new “state of emergency,” the room pushed back, pointing to populations where that state has been a reality for a long time. Hinojosa noted that many immigrant families already face daily threats of deportation. Others pointed to similar climates of fear in other populations in America; when audience members asked questions of the panelists, a black public radio reporter “thanked” Trump for making other Americans understand the fear she already experienced every day.

Despite the dire mood, Garfield’s repeated calls for media “not to be calm” in the face of extraordinary circumstances were met with skepticism.

“I don’t have to scream to have a sense of urgency,” Sanders said. “I think we mistake loudness for effectiveness sometimes, or paranoia for urgency.” He received a round of applause for that comment and added, “I walk around every day as a six-foot-tall black guy with no hair on his head and a beard, and I can’t walk into every room and yell.”

“Maybe a lot of us should be using our white privilege to do the yelling that you don’t get to do,” Garfield said, to which Sanders yelled, “No!”

In an election of intense name-calling, terminology became a hot potato, as well. Futuro Media Group set its terms from the outset by banning the words “illegal” and “minority” from its broadcasts. “For us, this is core,” said Hinojosa.

During the audience questions, Andi McDaniel, senior director of content and news at Washington, D.C.’s WAMU, pleaded with her colleagues to “listen to the station like a ‘deplorable’.” Hinojosa broke in. “Please, do not use that word anymore, mamita.”

After the panel, McDaniel told Current she hadn’t intended to use the word pejoratively but was trying to show how people like her boyfriend, who grew up in rural Iowa and has firsthand knowledge of the kinds of concerns generally shared by voters who overwhelmingly supported Trump, tend to get painted with a broad brush by both Clinton supporters and the media.

With the election just barely in the rearview mirror, ultimately no one on the panel could offer much in the way of definitive prescriptions. But on a more granular level, the NPR Politics podcast will resume a frequency of one to two episodes per week going forward, and there will be some reshuffling of the core staff.

“Everyone was surprised by the results,” Sanders told Current after the panel. “But now it’s reaffirming the beauty and the necessity of the work that we do.”