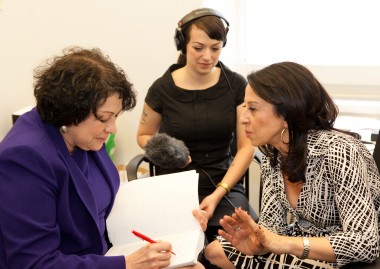 Veteran public radio and television journalist Maria Hinojosa found herself at a crossroads in March 2010 with the impending cancellation of Now on PBS, the weekly newsmagazine she reported for as senior correspondent.

The constant fundraising involved in establishing her own media company is ‘not for the fainthearted,’ Hinojosa said. (Photo: Santiagostudio.com)

Instead of taking a job at another media outlet, Hinojosa decided to form her own nonprofit production company. Now, her go-it-alone gamble is paying off: As public media increasingly seeks to attract diverse audiences, including the country’s 53-million-and-growing Latino population, Hinojosa’s New York–based Futuro Media Group is positioned to help meet the demand.

After two decades as a half-hour public radio series, Hinojosa’s Latino USA, has expanded to an hour, a length that’s more compatible with stations’ schedules. Produced independently by Futuro since 2010, the weekly NPR show’s carriage is growing, as is its social media footprint, with some 86,000 followers on the streaming SoundCloud platform. Meanwhile, PBS and World Channel are finalizing an eight-episode run of Futuro’s America By The Numbers with Maria Hinojosa, which explores how changing demographics are reshaping communities across the country. The series, which began with a 2012 election special, is expected to debut early next year.

In going independent, Hinojosa sought to bring a “consistent presence” of a Latina journalist to PBS, she said, while also amping up reporting on what she calls “the new American mainstream, or the new American majority.” While the demographics of the U.S. population are rapidly changing, “there isn’t consistent reporting on what that transformation of our society means right now,” she said.

On a recent Wednesday in Futuro’s office in a building on Harlem’s busy West 125th Street thoroughfare, TLC’s UnPretty is blasting; each morning a “song of the day” gets the staff of 17 full-timers and half-dozen interns off to a rousing start.

Leasing office space and hiring staff were just two of the challenges Hinojosa tackled in setting up her production company. “This is not for the fainthearted,” she said, describing the constant fundraising needs. In just over three years, she has raised $4.6 million, first from angel investor Fiona Druckenmiller, and more recently from a long list of media funders including Latino Public Broadcasting and the Ford, MacArthur and W. K. Kellogg foundations.

Even though public media’s leaders resolved long ago to broaden the system’s appeal to diverse audiences, getting the content onto public radio and television has nonetheless been “a challenge at every point,” she said.

CPB helped encourage an innovative partnership by bringing World, PBS and WGBH together for America By The Numbers. The series was piloted in the Need to Know time slot in September 2012.

In an innovative schedule configuration, each new half-hour episode is expected to premiere on World, followed by Saturday and Sunday broadcasts on PBS, where it will be paired with PBS NewsHour Weekend.

“The fact that new episodes of America By The Numbers may air on both PBS and World is exciting,” said Joseph Tovares, CPB senior v.p. president for diversity and innovation, by email. “World is an integral part of the overall CPB diversity strategy and the cross-promotion potential with PBS will benefit both channels.”

With the founding of Futuro, Hinojosa also took over production of Latino USA from Austin’s KUT, which launched the series in 1993.

“We’ve seen in the last year kind of a renewed life around Latino USA,” said NPR’s Eric Nuzum, v.p. of programming. From what he called a “staid, almost sleepy position,” the show has taken “some pretty sizeable risks,” he said, most notably the expansion to an hour. “You have to make sure you have an hour of really good material.”

Only Tampa’s WUSF dropped the hourlong version of Latino USA, citing a schedule issue, according to Nuzum. NPR hasn’t updated its carriage list, but he said distribution is growing, from what had been 110 stations. In spring 2012 Arbitron ratings, close to 300,000 listeners were tuning into the show each week.

New outlets to pick it up in recent months include Boston’s WGBH and WBEZ’s Vocalo service, aimed at Chicago’s younger, culturally diverse audiences.

Northwest Public Radio, serving Washington and parts of Oregon, Idaho and British Columbia, will add Latino USA to its seven-transmitter, seven-translator news service by the first of the year. With rapid changes to the region’s demographics, P.D. Gillian Coldsnow has for a few years wanted to add the program to her schedule. But the half-hour format put her off, given the difficulty of finding a companion show.

“I’m really thrilled we’ll be able to do this now,” Coldsnow said. “I don’t think it’s a show just for Latinos; it’s a show for everyone.”

While the Latino USA carriage has jumped, it’s often placed in fringe time slots. New York’s WNYC continues to air it at 6 a.m. Sundays on its AM station.

WNYC adjusted its schedule to accommodate Latino USA’s expansion by removing Left, Right & Center, which followed at 6:30 a.m. and had strong listenership, said P.D. Jacqueline Cincotta by email. She intends to evaluate Latino USA’s scheduling again “when it’s up and running for a longer period of time, to see how it evolves programmatically and how it performs with our audience.”

During the PRPD conference in Atlanta last month, outgoing NPR President Gary Knell cited Latino USA as he exhorted stations to make “a strong commitment to diversity, whatever it takes. It’s a business imperative. It’s the public in public radio.”

“If this is the new American majority, and Latinos and immigrants are not consuming public media, we have a problem on our hands,” Hinojosa said. “It’s not just my problem; it’s going to be my kid’s problem. We have to create this, because this is the future audience.”