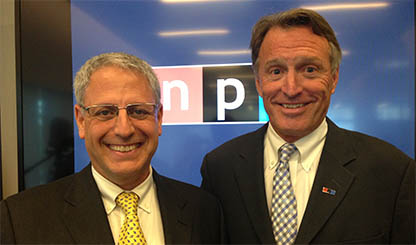 NPR Board Vice Chair Paul G. Haaga Jr., a public director who joined NPR’s lay leadership in 2011, will begin serving as acting president and c.e.o. on Sept. 30, stepping up as outgoing President Gary Knell prepares to take a new job as chief executive of National Geographic.

Haaga will take the reins as NPR prepares a major workforce reduction. NPR also unveiled a buy-out plan that seeks to reduce its workforce by 10 percent. Staff who have worked for the news organization for three years or longer are eligible. The buy-out offers were authorized by the NPR Board as part of a “strategic roadmap” intended to achieve a balanced budget for the network in fiscal 2015.

Both decisions were announced during a Sept. 13 board meeting at NPR headquarters in Washington, D.C. Kit Jensen, NPR chair and c.o.o of Cleveland’s ideastream stations, revealed that Haaga agreed to serve as interim c.e.o. for an annual salary of $1.

Haaga recently retired as chairman of Capital Research and Management Company and is a former partner in the D.C. law firm now known as Dechert Price & Rhoads. In the mid-1970s he was a senior attorney at the U.S. Securities and Exchange Commission.