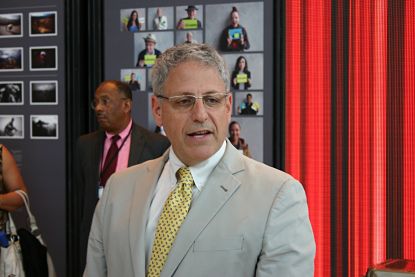 The unexpected departure of President Gary Knell puts NPR in the all-too-familiar situation of looking once more for a leader.

Knell surprised NPR’s board and staff when he announced Aug. 19 that he will leave in November to become president and CEO of the National Geographic Society. He was nearing the end of his two-year contract with NPR and had expected to renew.

Knell is the fifth chief executive to lead NPR on either a permanent or temporary basis since 2006. He signed on in December 2011 after the network had endured the tumultuous departure of his predecessor, Vivian Schiller, who resigned after the mishandled dismissal of commentator Juan Williams.

Departing NPR CEO Gary Knell speaking during a tour of the organization’s new headquarters in April.

Two members of her executive team — former news chief Ellen Weiss and Ron Schiller, v.p. of development — had also been ousted in the fallout from the firing. Ron Schiller, no relation to Vivian Schiller, abruptly resigned after he was surreptitiously caught on video criticizing political conservatives.

Upon arriving at NPR, Knell set to rebuilding the network’s crippled development department, and he “calmed some of the political winds down on Capitol Hill,” he said in an interview with Current. Among his other accomplishments, he cited promotion of strong journalism, advances on digital platforms and increased coverage of race and ethnicity through projects such as Code Switch and the Race Card Project.

Knell joined NPR nine months after Schiller’s resignation, and his charge was to stabilize the network’s leadership and operations. His successor will be in a “much better position” and can start from a stronger foundation, he said.

“He’s been a stellar CEO,” said Kit Jensen, chair of NPR’s board and COO of Cleveland’s ideastream. She credited Knell with effective fundraising abilities, strong strategic vision, a tight focus on the bottom line and earning respect from member stations, politicians and other constituents.

But his abrupt departure has disappointed NPR staffers who want stability in the president’s office. NPR’s board should have signed Knell with a contract that kept him longer, said Nina Totenberg, legal affairs correspondent.

“He’s done a terrific job here,” said Totenberg, who added that she was “really mad” about Knell’s departure. “You don’t take a job like this to leave after a year and a half.”

“He’s a very classy guy who did a thing that wasn’t very classy,” she said.

Knell said the opportunity to lead an organization much larger than NPR excited him. National Geographic took in $455 million in revenues in 2011, whereas NPR earned $184 million in fiscal year 2011, according to IRS filings. The job at National Geographic will also allow Knell to draw on his background in education, which he built up during his time as president of Sesame Workshop prior to joining NPR.

National Geographic is “sitting on a treasure trove of digital content that can be unleashed for educational purposes,” he said.

Knell stands to receive a considerably higher salary at National Geographic, likely topping his previous earnings as president of Sesame Workshop. Outgoing National Geographic President John Fahey earned $1.4 million in 2011, according to its Form 990. As the Workshop’s chief exec, Knell’s total compensation in 2010 approached $1 million, according to the nonprofit media company’s tax form.

Vivian Schiller earned about $500,000 at NPR in fiscal year 2010, the last year in which an NPR president received a full year’s salary and for which tax records are available.

But Knell described the pay hike as a “non-factor” in his decision, noting that he took a cut when he left Sesame Workshop. “I am not somebody who lives my life and my career driven by salary,” he said. “If I’d wanted to do that, I would have gone to work for Viacom or Disney, who would have paid me or people like me multiple times more money.”

Before leaving NPR, Knell will present to its board a budget for fiscal 2014. The network currently faces a deficit of about $6 million on revenues budgeted at $180 million for this fiscal year, according to Knell. A deficit of unknown size is projected for next year as well. But NPR aims to break even in fiscal year 2015.

NPR’s board will begin discussing the search for Knell’s replacement when it meets next month, according to Jensen, and will seek qualities similar to those that Knell brought to the job. “We’re proceeding in a general direction that we all feel is the right one,” she said. “But we have to be prepared always to change, to pivot if necessary.”

Meanwhile, a little less change would be welcome to some NPR journalists. Knell “came in at a time of turmoil and uncertainty and managed to create a sense of calm and stability,” said Ari Shapiro, White House correspondent. The CEO’s departure is “unsettling,” he said.

When asked what he’d like to see in Knell’s successor, Shapiro answered simply, “Longevity.”

“We interviewed some absolutely incredible candidates for the job two years ago,” said Dave Edwards, g.m. of WUWM in Milwaukee, who served as chair of NPR’s board when it recruited Knell. With NPR “in a stronger place than it was two years ago, I have no doubt that the candidate pool is going to be very strong,” he said.

Edwards was “extremely disappointed” when he learned that Knell would leave NPR, he said. “I guess I always knew that NPR would lose Gary to another company that would need his expertise,” he said. “I just never imagined that it would happen so quickly.”

Questions, comments, tips? mike@mikejanssen.net
This article has been updated to include additional text published in the print edition of Current.
ShareTweet EmailPrint More

One thought on “Knell’s departure prolongs churn in NPR presidency”