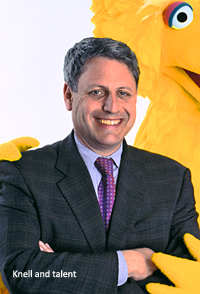 Gary E. Knell, president and c.e.o. of Sesame Workshop for a decade, will start work Dec. 1 with the same titles at NPR, the network announced today.

The NPR Board voted unanimously to hire the widely experienced leader of a comparably prominent, esteemed and successful public media institution who had preparatory stints as a legislative aide and in private media and public TV.

An NPR spokesperson said Knell would take a reduction pay. His Sesame Workshop compensation came to more than $746,000, NPR’s David Folkenflik reported today [Mark Memmott’s blog]. Though the production company behind Sesame Street and other children’s shows is a nonprofit, it has benefited from toy licensing and media sales revenues at a private-sector level.

“As c.e.o. of Sesame Workshop for more than a decade, he has led a large, complex organization through a tumultuous media environment, helping it grow by providing innovative, engaging content in new and creative ways,” said NPR Chair Dave Edwards in a release.

After seven months since Schiller’s departure, NPR insiders were complaining about the delay last week, according to Michael Calderone in the Huffington Post. (He dropped word that fans of Tom Brokaw had approached the former NBC anchor about the job opening, and that former NPR News exec Jay Kernis had applied for the job but reportedly was told he lacked a c.e.o. credential.)

Early in Knell’s career, he worked as a staffer in the California legislature and the U.S. Senate’s Judiciary and Governmental Affairs committees. He entered public media as general counsel of WNET, and served as managing director of Manager Media International, a print and multimedia publisher (daily Asia Times, monthly Asia Inc.) with offices in Bangkok, Hong Kong and Singapore.

Recent Sesame Workshop publicity photos have put Knell in a Disneyesque Uncle Walt pose. He joined Sesame Workshop in 1989 and was promoted to c.o.o. in 1998 and c.e.o. in 2000. The firm continued growing overseas as co-producer of educational kids’ shows in many other countries, including South Africa, India, Northern Ireland and Egypt.

He’s a member of the Council on Foreign Relations and the U.S. National Commission for UNESCO. Knell also serves on the board of the executive search firm Heidrick & Struggles. The NPR hiring was assisted by another firm, Spencer Stuart.