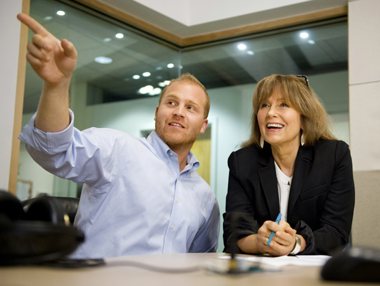 More than 100 public radio stations have picked up the midday NPR news show Here & Now with its expansion to two hours July 1, many of them to fill the void left by the cancellation of NPR’s long-running call-in show Talk of the Nation.

Produced by WBUR, the show now airs on 302 stations, according to NPR. The Boston station has added six full-time staffers to the program, including new co-host Jeremy Hobson, and has strengthened ties with NPR to collaborate on newsgathering for the midday hours. Fourteen stations across the country have joined a “contributors’ network” for the show, providing stories and reporter interviews stemming from local coverage already underway.

The three-part collaborative model marks a “new paradigm” for a station and NPR teaming up to produce a show, says Charlie Kravetz, g.m. of WBUR. “There has never been a time when NPR has opened up its newsroom and collaborated on a program like this,” Kravetz says.

The addition of Here & Now to NPR’s midday lineup also provides the network and stations with a go-to news team for covering breaking-news events in the midday hours. NPR will have the option of extending such coverage to stations that don’t carry Here & Now, and the network could also step in when needed to take over reporting from its Washington, D.C., headquarters.

Previously, NPR’s breaking-news coverage during midday hours fell either to Talk of the Nation or an ad hoc assembly of NPR hosts and producers.

Stations have been asking for a newsmagazine to fill the hours between Morning Edition and All Things Considered, says NPR President Gary Knell. “This now provides that vehicle, and this really will be much more of the ‘newsroom of the nation’ that I’ve been trying to promote.”

“Given what we’ve seen since September 11, there are a lot of big events, whether they’re human- or weather-related, that require the kind of coverage that you would get in Morning Edition or All Things Considered, but they happen in the middle of the day,” says Helen Barrington, executive director for programming at New England Public Radio in Amherst, Mass. The network has carried Here & Now since NPR discontinued Day to Day in 2008, and it added the show’s second hour July 1.

Yet some station programmers and journalists are also lamenting the loss of Talk of the Nation, which aired on 407 stations. At the Public Radio News Directors Inc. conference in Cleveland June 21, John Dankosky, news director at Connecticut Public Broadcasting Network in Hartford, said the show’s cancellation closed down an avenue for listeners to be heard on the air. With its ending, public radio is “losing a lot of talk-show muscle,” Dankosky said in a discussion with Margaret Low Smith, NPR’s senior v.p. of news.

Smith said the decision was “painful” but that NPR should fill gaps in programming that stations can’t, and that many stations have developed their own midday talk shows.

WBUR began producing the one-hour Here & Now in 1997 and offering it nationally through Public Radio International after 9/11. In its new role as a production partner, NPR is assisting in hiring staffers, creating content and developing the tone for the two-hour version.

To cover what Kravetz calls the “substantial additional costs” of expanding the program by hiring new staff, WBUR will seek new underwriters for the show. GEICO has signed on as a new national sponsor, and MathWorks, a Massachusetts-based software company, is continuing a decade-long sponsorship as well.

If the station is unable to cover the price tag, NPR and WBUR will share in making up the shortfall. “Midday is not the easiest time to monetize,” Kravetz says. “That’s why it makes sense to share risks and benefit from working together.”

Meanwhile, NPR, whose revenues have not been keeping pace with spending, has trimmed several hundred thousand dollars from its budget by ending Talk of the Nation, according to Knell.

While WBUR expands its in-house production staff for Here & Now from 11 to 17, NPR has assigned Bridget Kelley, supervising senior producer of Weekend Edition, to serve as a liaison between WBUR’s team and NPR. An assistant producer will also work for Here & Now out of NPR’s headquarters.

Another channel of content for the show will spring from the contributors’ network of public radio stations around the country (see box, bottom). The show’s relationships with these contributors will differ from NPR’s customary approach to working with stations: Here & Now will work on a faster turnaround by adapting some pieces already produced for local stations and carrying interviews with station reporters.

The show will not commission pieces from stations and build them from the ground up as NPR does, however. NPR “has very deep back-and-forth iterations of the work,” Kravetz says. “That is not our model.”

NPR’s Smith told PRNDI attendees that the show will aim for two pieces a day from stations.

After WBUR works with participating stations to refine its processes for shepherding pieces to air, the contributors’ network will grow to any stations that wish to participate, Kravetz says. WBUR will pay station reporters for their contributions.

By increasing its focus on news of the day, the revamped Here & Now will be a “very different program,” says NEPR’s Barrington, who visited WBUR last month with about a dozen representatives of stations from the Northeast to learn about the new show.

A noticeable change will also be the addition of Hobson, who previously hosted American Public Media’s Marketplace Morning Report. The matchup between Hobson and co-host Robin Young could make or break the show, Barrington says, “and I know it’s going to make it. He and Robin sound great together. It’s a very natural pairing, and there’s no way you can know that until you hear it.”

As Here & Now expands to two hours, producers initially will tap a network of 14 contributing stations as they refine the process of incorporating locally produced news coverage into the midday show. The network will eventually expand to include any stations that want to participate. Stations contributing during the trial phase are: