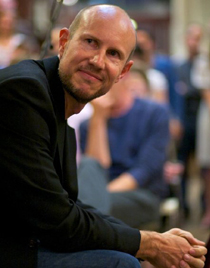 Let a producer with an offbeat or untested idea try it out as a podcast, Bowers advises.

I love podcasts. I make my living as a podcast producer. I believe the medium is a vital part of the future of radio. As a 20-year veteran of NPR and various local public radio stations, I find podcasting a refreshing antidote to the many restraints of terrestrial radio: the tyrannical format clock. The need to appeal to the most general audience possible. The FCC’s neo–Hays Code morality standards.

And yet I have a confession: I hate the word “podcasting.”

For one thing, its very name derives from a device — the iPod — that most of us have long since jettisoned to the junk drawer or the local electronics recycling drive. You don’t need an iPod to listen to podcasts! Your smartphone, your tablet and your car are all podcasting devices.

Second, the word screams “2005,” which in Internet time is like touting your excellent sextant technology in the age of GPS.

Third, it reminds people of a bygone technology they once heard was all the rage until it seemingly vanished under the wake of supertankers such as YouTube, Facebook and Twitter.

Yet despite this baggage, podcasting, or whatever clever term we eventually find to replace it (email your suggestions to andy.bowers@slate.com), has only grown and matured in the years since it began with a few amateurs gassing on for hours in their basements about their tech obsessions and colorful sex lives. Numerous entertainers and serious journalists now earn their livelihoods through this medium and have built large, loyal, enthusiastic audiences. If you’re a public radio station without a plan for how to take advantage of this remarkably flexible and creative platform — a platform that leverages your existing skills better than anything else in new media — you need to think again.

Consider these points, compiled from a recent webinar I conducted at the invitation of NPR Digital Services:

“In both cases, I think we had a strong early belief that the podcast route was one way to quickly develop something in a less pressured environment,” says Chris Bannon, WNYC’s v.p. for content development and production. “You have to figure out the story each podcast is trying to tell, what the arc of each episode should sound like, and those things can take time to develop.”

Bowers calls The Organist, hosted by Andrew Leland, pictured, “an ambitious project and one that will no doubt evolve before it finds a place on the finite airwaves of the FM station,” KCRW in Santa Monica. (Photo: Scott Pham)

Another station embracing the podcast-first model is Santa Monica’s KCRW, which produces numerous online-only programs and recently debuted a new monthly show called The Organist in collaboration with the McSweeney’s magazine The Believer. It’s an ambitious project and one that will no doubt evolve before it finds a place on the finite airwaves of the FM station. But in the meantime, listeners are checking it out and providing feedback, and the show is building an audience. (KCRW wisely runs on-air promos steering people to the podcast.)

I guarantee you that right now, within the walls of your station and in the surrounding community, there are people dying to try a new radio show. You, the local public radio professionals, have studios, microphones and editing equipment that aren’t always in use. You have very little to lose by letting producers with offbeat and maybe brilliant ideas try them out in your studios. And who knows — could the next Ira Glass, Krista Tippett, Roman Mars or Click and Clack be hiding within a stone’s throw of your station? Podcasting is a very low-risk way to find out.

This is not simply an academic or philanthropic thought experiment. The car, the main listening venue for much of radio, is about to become a fully Internet-connected device. General Motors announced in February that its 2015 models will include native online connections. This means your stations will increasingly share the car media console with services such as Pandora and iHeartRadio, Audible books, every other public radio station out there and audio-on-demand (i.e., podcasts).

According to Jennifer Ferro, KCRW g.m., the distinction between on-air and online is becoming increasingly meaningless: “Maybe bring [a new show] on the air, or maybe not. What I’m intrigued by is the alternative distribution methods to radio. Once Internet in the car becomes ubiquitous, it really doesn’t matter if something is on the air or isn’t on the air.” KCRW’s smartphone app already includes both on-air material and Internet exclusives side-by-side. I’d wager some listeners aren’t even aware of the difference.

I don’t know exactly how this brave new world of automobile audio will shake out, but I do know that public radio must claim more real estate on those future dashboard touch screens if it’s to avoid being pushed into a dusty corner. Innovative, provocative and locally relevant podcasts are one way to establish a new beachhead in the all-important battle for the car.

Let’s just hope we can come up with a better name for podcasting by then.

Andy Bowers is the executive producer of Slate Podcasts and a former NPR White House, London, Moscow and national correspondent. You can reach him at andy.bowers@slate.com.
ShareTweet EmailPrint More

2 thoughts on “The name needs revamping, but podcasts are here to stay”