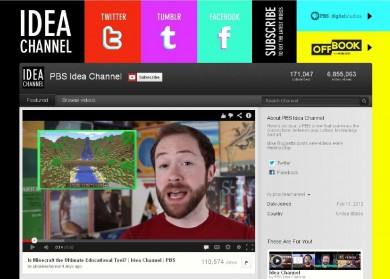 “I feel right at home, more and more so every week, working for PBS,” said Mike Rugnetta at SWSW. His “Idea Channel” has garnered hundreds of thousands of views for PBS on YouTube.

AUSTIN, Texas — During a March 10 appearance at the South by Southwest Interactive conference, PBS President Paula Kerger talked the talk of digital innovation, pointing to the network’s recent successes with web-original videos, social media messaging and the unparalleled popularity of online content tied to PBS Kids.

“South by Southwest and PBS both actually have a lot in common, because we’re both dedicated to spreading ideas,”  Kerger told SXSW Interactive attendees. She incorporated the language of technology companies into her presentation, saying members of PBS Digital Studios had been “encouraged to fail” as they designed a slate of web-original programs, and that PBS’s social media presence was created without going through “layers of bureaucracy.”

“I feel right at home, more and more so every week, working for PBS,” said Mike Rugnetta at SXSW. His “Idea Channel” has garnered hundreds of thousands of views for PBS on YouTube.

“The web needs curators and trusted guides,” Kerger said. “And that’s what we’re trying to do. In fact, it’s what we’ve been doing on television for decades.”  Kerger’s speech on digital innovation was one of several events promoting PBS to digital natives and technology innovators who flock to SXSW Interactive. PBS also threw a party featuring Peter Sagal, host of NPR’s Wait, Wait… Don’t Tell Me!, whose new public TV program Constitution USA With Peter Sagal, premieres on PBS in May.

Although the popularity of the PBS Kids website is by far the network’s greatest online success — the site has 10 times as much web traffic as the rest of the content on PBS.org — Kerger pointed to web-original programs that resonated with general audiences, including: The officially sanctioned “trippy” remix of Mr. Rogers’ Neighborhood (which went to No. 1 on YouTube two days after launching in 2012); a Super Bowl tweet about Downton Abbey that garnered free publicity in major media outlets; and PBS’s partnership with AOL creating online supplements to the women’s-movement documentary Makers: Women Who Make America, which debuted on PBS last month. A cheer went up from a few audience members at the mention of Makers.

“Our founding fathers knew our future rested on the ability of our nation’s citizens to be active participants,” Kerger said, explaining that PBS must pursue innovation if it is to “remain a window on the world to as many Americans as possible.”

Kerger also described a recent success in online fundraising for Austin’s public TV station, KLRU. PBS collaborated with the station on a crowdfunding campaign to raise funds for new episodes of its original web series BBQ With Franklin. The campaign, launched on Indiegogo in October 2012, raised nearly $20,000, surpassing its goal of $16,000.

PBS continues to explore future fundraising opportunities via digital platforms, Kerger said, so that it can figure out how to “really develop relationships” with visitors to PBS.org. She also acknowledged that on-air pledge drives, running now on most public TV stations, are an outdated approach to fundraising.

At the official PBS party that evening, masses of SXSW badge holders packed Austin’s Chicago House bar to capacity, claiming free PBS T-shirts and mobbing guest of honor Peter Sagal as if he were a rock star. Sagal, who also led a 5K “fun run” around Austin that morning for PBS fans, joked that the mostly young crowd at the party looked less like public broadcasting fans and more like people who would be cast to play public broadcasting fans in a movie. While he was speaking, members of the crowd interrupted with catcalls, asking “Where’s Carl Kasell?”

Throughout its day of high-profile activities at SXSW, PBS made overt efforts to appeal to a young, Internet-savvy audience. Mike Rugnetta, the creator and host of PBS Digital Studio’s YouTube series “Idea Channel,” made introductory remarks at Kerger’s panel talk and at Sagal’s party. And Kerger punctuated her talk with videos of Internet-insider jokes, including a clip from the 2003 comedy Anchorman and a fan-made conception of Downton Abbey characters performing the “Harlem Shake dance.”

“I feel right at home, more and more so every week, working for PBS,” Rugnetta said. His “Idea Channel,” on which he explores various facets of Internet and popular culture, has garnered hundreds of thousands of views on YouTube. He called his show “an expression of an obsessive curiosity, a descriptor that I think is just as easily applied to Nova, NewsHour and Grover.”

Kerger acknowledged that PBS is increasingly challenged to fight for audiences’ attention amongst all the media channels and on-demand streaming options now available to viewers, but she pointed to the qualitative differences that distinguish PBS. The cable channels that encroached on PBS’s territory have veered more and more toward low-quality reality TV. “We treat the people who use our services as citizens and not consumers,” Kerger said.

Still, Kerger knows the quest for youthful relevance continues. “Are we completely there? Not yet, but we’re on an interesting path,” she said.

Questions, comments, tips? lapin@current.org
This story has been revised to correctly identify the PBS station in Austin as KRLU.
ShareTweet EmailPrint More

One thought on “PBS pushes message of digital innovation at SXSW”